Home > News > Europe > We need to talk about the Monarchy

We need to talk about the Monarchy

On the occasion of the royal visit to Scotland to mark the 20th anniversary of the Edinburgh parliament, a Scottish republican examines the future role of the British Royal family 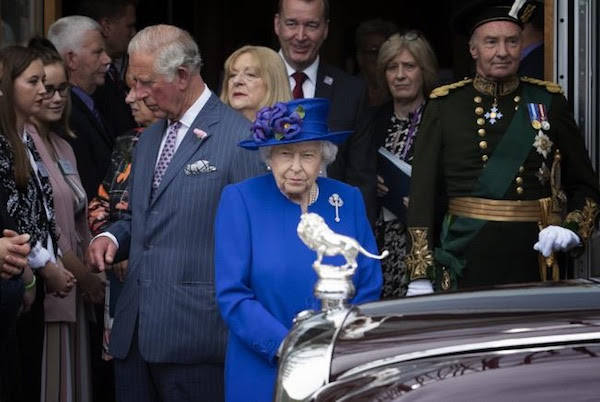 On the occasion of the royal visit to Scotland to mark the 20th anniversary of the Edinburgh parliament, a Scottish republican examines the future role of the British Royal family.

It wasn’t just the usual public displays of bowing and scraping which struck me as odd and depressing during the Queen’s Scottish visit, but the complete lack of questioning of both the Royal family’s place in society, and the institution of monarchy itself.

On an occasion meant to mark devolution’s 20th anniversary, where was the discussion about the right to rule? Where was the scrutiny of privilege, power and wealth? Why is the monarchy, which stands at the very heart of our democracy, not subjected to rigorous debate?

The monarchy is often defended on the grounds that “the Queen is a good woman”. I know nothing of the Queen’s soul. I can neither judge her good or bad, but I accept many see her as a person of moral standing. However, the character of Elizabeth Windsor is meaningless in any debate about monarchy.

The institution of monarchy should have been buried decades, if not centuries, ago. Like the death penalty or denying votes to women or jailing people for who they have sex with, the idea that a person has a hereditary right to rule stands in opposition to every principle of modernity.

What slaves it makes us to accept this state of affairs. This isn’t a call for some Robespierre revolution. Britain – England in particular – has been sucking on the crack-pipe of royalty for too long to be weaned off any time soon. What’s needed though is an intelligent ongoing conversation which challenges the accepted wisdom that monarchy is a good thing when it clearly isn’t.

The time is ripe for that debate. It may be an ugly thing to say but the Queen’s age makes the discussion pertinent. Even Republicans like me accept that the monarchy is safe as long as she lives. However, the entire fabulation – every palace and power, every penny and privilege – needs to be put to the test before her Crown passes on.

I struggle to find one argument to sustain monarchy. People cite tradition. It used to be traditional to burn witches. The traditions of this country have served us badly. Britain clings to the past like a drowning sailor – if the country hadn’t been so obsessed with the war, the flag, and the Royals, we might have seen clearer and avoided the red, white and blue disaster that’s Brexit. The Royals are in the DNA of fervid English nationalism and exceptionalism.

After tradition comes the tourism argument. Rich Americans spend good money gawping at Buckingham Palace. Is anyone stupid enough to accept instant second class status in their own country in return for tourist dollars that will never come their way? It truly is a case of selling your birthright for a mess of pottage.

We’re the butt of a disgraceful sick joke which we’ve played on ourselves. We take a handful of people and elevate them, gifting them gilded lives, while at the same time the UN describes the poverty in Britain as tragic and systematic. Our sense of shame should be boiling over, but we don’t even discuss the rights and wrongs of monarchy anymore, let alone the idea of abolition.

The cooing over royal babies is particularly disgusting. A child is born into the world who will never financially struggle a moment in their life. A child has power and prestige heaped upon it in the cradle – like gifts from fairy godmothers – even it that child should grow up to be intellectually or morally inferior to many of the rest of us. Monarchy murders meritocracy.

Social mobility barely exists in the UK. The top professions are dominated by public schools and Oxbridge. No wonder. The monarchy effectively codifies inequality in law. Britain remains a country of the one per cent, and the Queen is the great symbol for that class-ridden stratification of society.

Meghan and Harry have spent millions in public funds doing up their already free home, Frogmore Cottage in the grounds of Windsor Castle. The final bill is expected to be £3.2m. It will be the perfect home for their baby. There was a headline in one of the glossy magazines recently which read “Why the Royals can’t stop giggling”. It had lots of pictures of Harry and William and all the rest of them laughing. I couldn’t help but think, they’re laughing at us.

Amid all the squandering of money on these people, it feels redundant to make the point that there are working families unable to pay their mortgages across the land, and jobless families struggling to clothe and feed themselves. Yet, the British doff their cap, and don’t bat an eyelid.

The philosopher Thomas Paine said “a long habit of not thinking a thing wrong gives it a superficial appearance of being right and raises at first a formidable outcry in defence of custom. But the tumult soon subsides. Time makes more converts than reason.”

Britain, with its stubborn anti-intellectualism and ingrained deference, has refrained from critical thinking about the royals. One moment spent in true thought about monarchy and what the institution says about Britain, what it symbolises within our society, and the entire edifice would logically come tumbling down. Monarchy is incompatible with equality.

There was one person who dared to hint that the emperor had no clothes, though. When the Queen came north, Patrick Harvie, co-leader of the Greens, refrained from the usual obsequiousness, dropped the phrase Your Majesty from his address to Holyrood and simply referred to the Queen and the rest of the audience as Friends. Mr Harvie also stated that it’s the people of Scotland who are sovereign – no-one else.

That simple levelling – of bringing the Queen down to the same status as the rest of us – was an important act which quietly and politely said: “not everyone accepts this grotesquerie”.

Britain is locked on a path of seismic and inevitable constitutional change and the royals will have to change with the times. Britain may soon be a rump state, with a unified Ireland to the west, an independent Scotland to the north, and a lost Europe across the channel. The Queen may find herself ruling over a very little England indeed. Whether the monarchy continues elsewhere in these islands after her death remains to be seen, but the conversation needs to begin now.

British Royal family, Great Britain, Top
You may also like

By Neil Mackay (for the Herald)