Heza Shengal went to Raqqa to fight and she joined the YJŞ. «For the Yazidi women the YJŞ became a great hope. It was the voice and answer of all Yazidi women who were bought and sold and subjected to persecution» 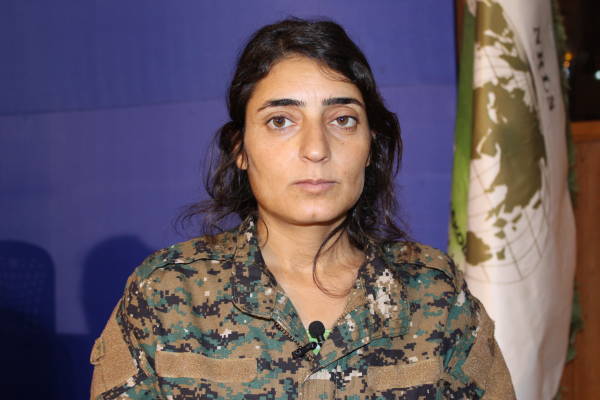 Heza Shengal told ANF about her experiences and the point reached. She recalled that during the massacre in Shengal in 2014, Yazidi women were kidnapped by ISIS mercenaries.

«ISIS kidnapped 25 people from my family. First they threw are in jail in Iraq and after they brought us to Syria. Women, children and old people were thrown in prison. After a certain time, the mothers were separated from us and the remaining young women began to be sold to mercenaries.»

Shengal continued: «Someone took me as a maid. We were serving them like slaves. Then they gathered all the Yazidi women in one place. They made it the market of Yazidi women and their daughters. ISIS persecuted us, beat us, tortured us. They did all kinds of evil with all kind of weapons. Yazidi children and women were all tortured there. The children were taken away from their mother, Raqqa was their capital, tere we were bought and sold. After thousands of Yazidi women were sold in Daim Square, hundreds of them were tortured, bought and sold, and many committed suicide. «

‘YPJ AND YJŞ was a great hope for Yazidi women’

Shengal said that finally she could trust herself and with the help of a family managed to escape and was freed by the YPJ-YJŞ.

«After my liberation, I went to Shengal. But it was the idea and philosophy of Önder Apo that supported us in this last genocide.»

Suad Murad (Heza Shengal), a Yazidi woman, was captured by ISIS in Shengal in 2014 and when she managed to escape joined the ranks of the YJŞ.

Shengal said: «I fought in Raqqa, the same place where we were sold and bought. I would like to point out that as a Yazidi woman who has been subjected to such cruelty and torture, I took my revenge as a young person when I joined YJŞ. But we want ISIS mercenaries to be tried in the lands where they were actually defeated. We want the international court on ISIS to be established here. And we, as Yazidi women, want to take part to the trial.»