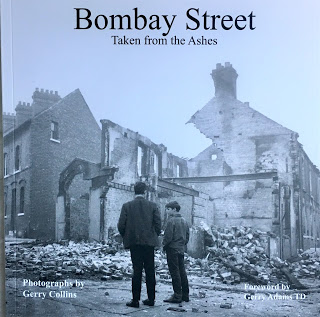 The second week of August 50 years ago witnessed the most intensive and violent period of conflict in the North since the 1920s. It also saw British soldiers arrive on the streets of Derry and Belfast, where they remained for another 30 years. The fighting in Derry, and the widespread destruction of homes in Belfast, revealed in all their stark brutality the deeply sectarian nature of the northern state and exposed the institutional links between the unionist political establishment, its armed state forces and loyalist paramilitary organisations.

Several recent publications have been produced about August 1969. They include ‘Burnt Out; How the Troubles began’ by Michael McCann, and two books of photographs, ‘Ardoyne – The Aftermath’ and ‘Bombay Street’.

The Clonard Residents Association has also produced an excellent video film; Eyewitness- The Burning of Bombay Street, which uses filmed reports of the time, including interviews with victims – to provide an excellent report of those even. In particular, the video also makes use of an audio homily given by Fr. Egan of Clonard Monastery, to the men’s confraternity, a few days after the attack on Clonard by loyalist mobs and B Specials. Fr. Egan also expresses his gratitude for the courage of the young men and women who defended the area. The video is available on youtube at: https://youtu.be/j5_qn19h3WM

Burnt Out’ is a detailed, hugely informative, and well researched book which reminds us of the context for August 1969. As a 14-year-old Michael McCann and his family were one of over three thousand families who were forced to flee when loyalist mobs, the B Specials and RUC attacked Catholic streets in west and North Belfast.

He reminds us that over the two days of the 14th and 15th August eight civilians were killed. Seven – including two children – died in Belfast and one person was shot dead by the B Specials in Armagh. The first British soldier to be killed was Hugh McCabe, a 20-year-old home on leave who was shot dead by RUC snipers from the roof of Hasting Street Barracks.

In his meticulously researched account of August 1969 McCann provides the most comprehensive explanation of that period. McCann is very blunt about his purpose in writing the book: “The main aim of my book is to highlight the relationship produced between reactionary loyalism, state forces and the unionist regime in the conflagration that erupted in the summer of 1969, which arguably generated three decades of subsequent violence”.

McCann also reminds us of one tactic frequently employed by the RUC, political unionism and the British state throughout the decades of conflict – blame the victim for their oppression. As Catholic homes burned in Belfast the Stormont regime and the RUC spuriously claimed that it was all part of a nationalist rebellion. Despite the clear evidence that the Belfast pogrom was the work of loyalist mobs assisted by the RUC and B Specials, the Special Powers Act was invoked, and 24 republicans were interned.

A few days after the destruction of Bombay Street, Percy Street, Conway Street, Hooker Street, Herbert Street and more, four Ulster Unionist Party Stormont Ministers held a press conference on Sunday 17th August to outline their view of the events of recent days. McCann records that the international and local media covering the press conference “listened in disbelief” as the Unionist Ministers tried to blame the Catholic victims of the pogrom. This included a claim that families had burned their own homes.

McCann writes: “When one reporter pointed out to the Education Minister, Captain Long, that ‘Protestants had gone into one area and burnt sixty-seven houses ‘and that his ‘own investigation’ suggested that 200 Catholic houses had been burned, Long breathtakingly replied that ‘a tremendous amount of those fires have been started within those areas which were sealed off by the Catholic population themselves… When asked by a journalist to whom information for a potential inquiry should be given, the Minister of Home Affairs, Robert Porter, replied: ‘to the police’, at which point ‘almost the entire hall burst into laughter.’”

But unionists were deadly serious in their desire to defend their aggressive actions by blaming Catholics. According to McCann the Rev. Martin Smyth, a leading Orangeman claimed that “most Roman Catholics left at their own wishes. Some fired their own homes.”

Between August and September it is estimated that 3,500 families fled from their homes in Belfast. 85% of them were Catholic.

On the same date – August 14th – that the British Army was deployed on the streets of the North the British Home Secretary Jim Callaghan sent Robert Mark, Deputy Commissioner of the Metropolitan Police and Douglas Osmond, Chief Constable of Hampshire to Belfast to assess the policing situation. In a report to Callaghan they described the RUC as a “force apart‟. They also reported that at the first signs of trouble the RUC reverted to a paramilitary force where any opposition to the status quo was dealt with by force. Mark and Osmond concluded that the RUC was a sectarian agency whose role as an arm of the ruling Unionist party precluded it from performing the duties of an impartial police force.

The new edition of ‘Bombay Street: Taken from the Ashes’ by Gerry Collins and ‘Ardoyne – the aftermath’ by Hugh McKeown provide a different perspective on August 69. These are two unique photographic accounts of the devastation inflicted on Catholic areas. The books are the work of Frankie Quinn – a Belfast photographer – and the Belfast Archive Project. Frankie who is a well-known and celebrated photographer in his own right recognised the unique significance of the photographs taken in by Gerry and Hugh.

The morning after Bombay Street was destroyed on 15thAugust Gerry Collins walked to Bombay Street where his aunt lived. He brought his camera and three rolls of film. Later that week he went into other areas in the Falls and took more photographs of barricaded streets and burned out homes and buildings. It is a remarkable visual record of events of an extraordinary time in August 1969. They record the pain and the trauma for families suddenly left with nothing.