Amed Metropolitan Municipality co-mayor Selçuk Mızraklı and HDP Deputy Meral Danış Beştaş stated that they do not recognize the trustee: “Everyone should take responsibility.” 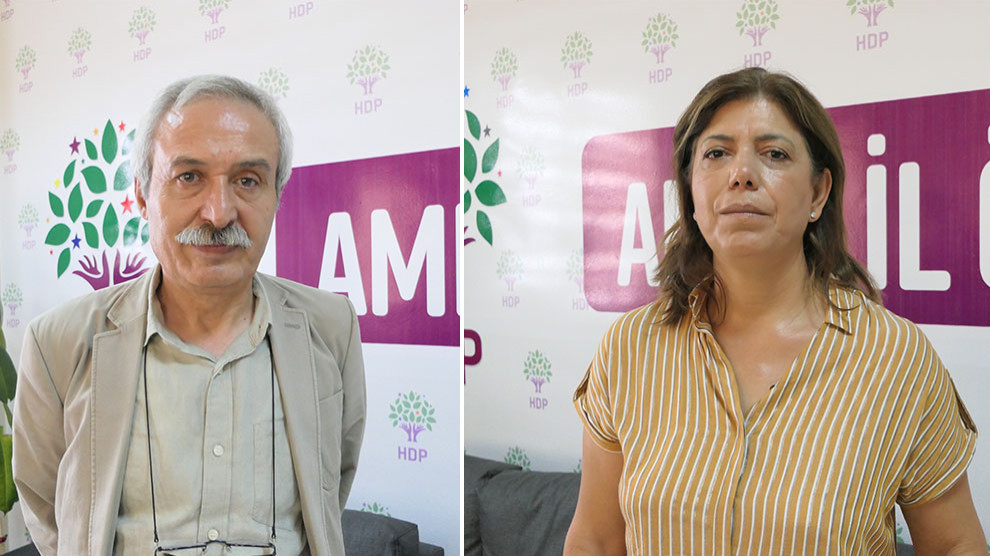 The HDP- run metropolitan municipalities of Amed, Van and Mardin have been seized by the Turkish Interior Ministry which appointed trustees replacing the legally and freely elected mayors.

The appointed trustees have been going to the municipalities escorted by hundreds of police. Hasan Basri Güzeloğlu, the trustee assigned to Amed, has already installed himself in the town hall.

Mızraklı said that despite the will of millions, the will of the voters was ignored by a unilateral decision by the central administration.

Mızraklı pointed out that with the appointment of trustees, the rules of democracy, legal value and constitutional principles were also ignored.
“There has been no respect for the will of hundreds of thousands of people. We were faced with a night operation. And what we face is not something that concerns the HDP alone, it is a matter for all democratic people. It is essentially a moral test for institutions and individuals who believe in democracy as a whole, and to face this moral test everyone who believes in democracy must declare its objection. It is everyone’s responsibility to respond as it is fit.”

Democracy’s values are under attack

Mızraklı stated that seeing that the AKP attacks against HDP municipalities as being limited to Amed, Van and Mardin “alone” is essentially a “surprise”.

He added: “The democratic will as a whole has been usurped here. They want to complete what they have left halfway through the 31 March process. On that day, the Decree Laws were cited as a reason, but today there is no such case. There is no investigation or prosecution. This is only a direct will to seize our municipalities. Therefore, the target of this operation is neither a person nor a party. All democracy values are targeted here. Every person who believes in democracy should approach this with awareness. They should all play their role and take responsibilities.”

Beştaş: The people had not chosen the AKP, they told them to go!

Describing what happened as a coup, HDP Siirt MP Meral Danış Beştaş stated that this new operation actually showed the point of arbitrariness of the AKP.

Beştaş stated that the people’s will was manifested five months ago at the elections when more than 60 percent of the votes went to the HDP. The people said to the AKP ‘stop and go’. Moreover, immediately after the election, the whole world saw how the corruption ruled during the trustee period and how the trustees abused public goods. The Ministry of Interior has issued an instruction based on abstract grounds. This instruction has been prepared in accordance with their own views. They have provided reasons incompatible with law.”

We do not recognize this decision!

Beştaş emphasized that the Ministry of Interior decided to appoint a trustee first and then put forward abstract reasons to justify this action.

“Of course we do not recognize this decision. – the Siirt deputy said – We are behind the people’s decision. We need everyone to respect the decision of the people. There is no greater power and will than the people. All structures of our party are mobilised.  The decisions taken and the road map will be determined as soon as possible.”