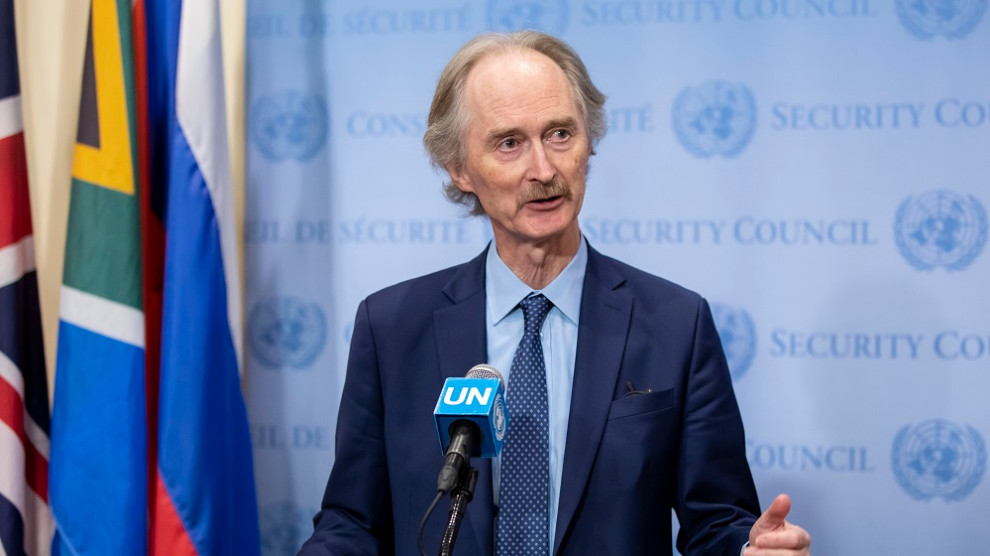 The meeting was one day ahead of the launch of the Syria Constitutional Committee.

The Committee will be formally launched on Wednesday in the Palais des Nations in Geneva. It vows to be inclusive, hovewer he Autonomous Administration won’t be represented.

The United Nations special envoy for Syria will meet the foreign ministers of Turkey, Iran and Russia in Geneva today, a day before talks among the 150 members of the Constitutional Committee in Geneva are scheduled to begin.

Announcing the plan for discussions with Turkey’s Mevlut Cavusoglu, Iran’s Mohammad Javad Zarif and Russia’s Sergey Lavrov, UN envoy Geir Pedersen said the fighting in northeast Syria and Idlib province was “just another proof of the importance to get a serious political process under way”.

Pedersen said: “As you know we have agreed that this is to be a Syrian-led, Syrian-owned Constitutional process– facilitated by the United Nations and I think Jenifer already mentioned it will be launched here on Wednesday.

The agreement to establish the Constitutional Committee – with terms of reference and core rules of procedure – marks the first political agreement between the Government of Syria and the opposition. That’s my first point.”

The second point, said Pedersen “is that this marks a clear acceptance of the other as an interlocutor in the political process outlined in Security Council resolution 2254.”

The third point is that “the committee commits the government and the opposition and their nominees to sit together face-to-face in dialogue and negotiations.”

The fourth point is that “it also creates spaces for the voices of civil society and for them to be heard, together with the voices of the government and the opposition.”

Outlining the role of the Constitutional Committee’s work, Pedersen said that this “is framed by key principles – including respect for the United Nations charter, relevant Security Council resolutions, Syria’s sovereignty, unity, independence and territorial integrity, and the Syrian-led and -owned nature of the process.”

The principles also include the objective of UN supervised elections as envisaged in resolution 2254 based on a new constitution, and the need for a broader political process to implement resolution 2254.

Pedersen added: “The Committee is mandated, within the context of an UN-facilitated Geneva process, to prepare and draft for popular approval a constitutional reform as a contribution to the political settlement in Syria and the implementation of Security Council resolution 2254. This is now agreed between the government and the opposition.”

Decisions will be taken by consensus, where possible, and otherwise by majority of 75 percent. “This of course – said Pedersen – is to emphasize that no one bloc can dictate the outcomes and it will create, we hope, incentives to reach out to the middle ground and across the divide.”