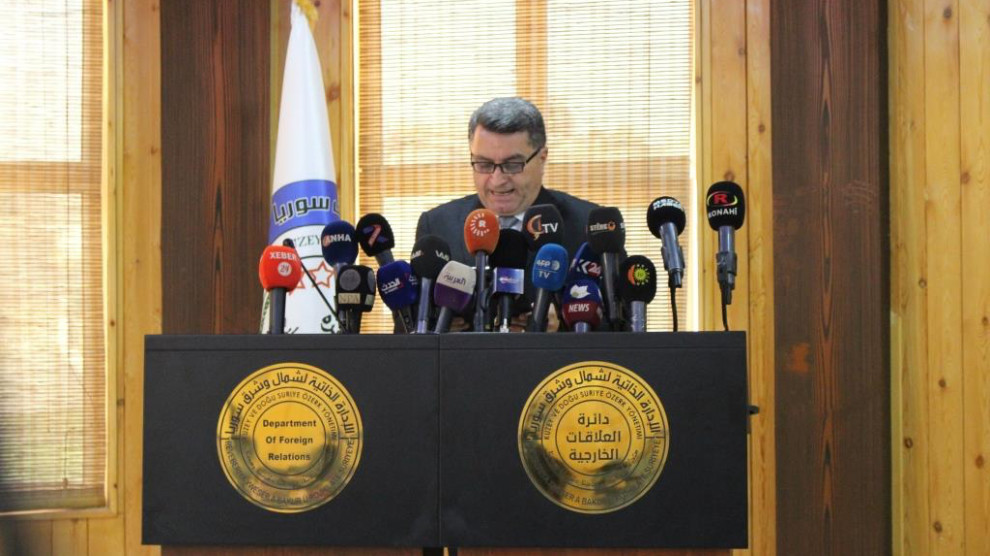 The Committee on Foreign Relations of the Autonomous Administration called on the United Nations (UN) to establish a committee to investigate the situation of civilians exposed to Turkish attacks and to prevent further attacks on civilians.


The Department of Foreign Relations of the Autonomous Administration of Northern and Eastern Syria held a press conference at its headquarters in Qamishlo.

The statement was made by Abdulkerim Omer, co-chair of the Foreign Relations Committee.

Omer said: “After taking control of Serêkaniyê and Girê Spî, The Turkish forces forcibly displaced more than 300 thousand civilians from their cities, villages and towns, and destroyed houses, hospitals and infrastructure.”

Omer added: “The Turkish army is trying to bring inhabitants from other zones and settle them there. In order to achieve its political objectives aimed at changing the region through various means, including forcing a demographic change under the name of a false returning of the displaced people.”

Omer continued: “We absolutely reject these policies and call on world public opinion to act to prevent this catastrophe against Northern and Eastern Syria which will open the doors to ethnic conflicts.”

Omer asked the United Nations “to ignore the study of the Turkish regime’s proposal in resettling the families of mercenaries in our regions, and to work on forming a fact-finding committee in order to learn about the practices of Turkey and its mercenaries, and the situation of the forcibly displaced people as a result of the Turkish aggression”.

The request aims to “document the abuses, violations and field executions against the unarmed civilians and to prevent this Turkish project, which will harm the region and cause further instability”.

Top, Turkey, UN, War crimes
You may also like