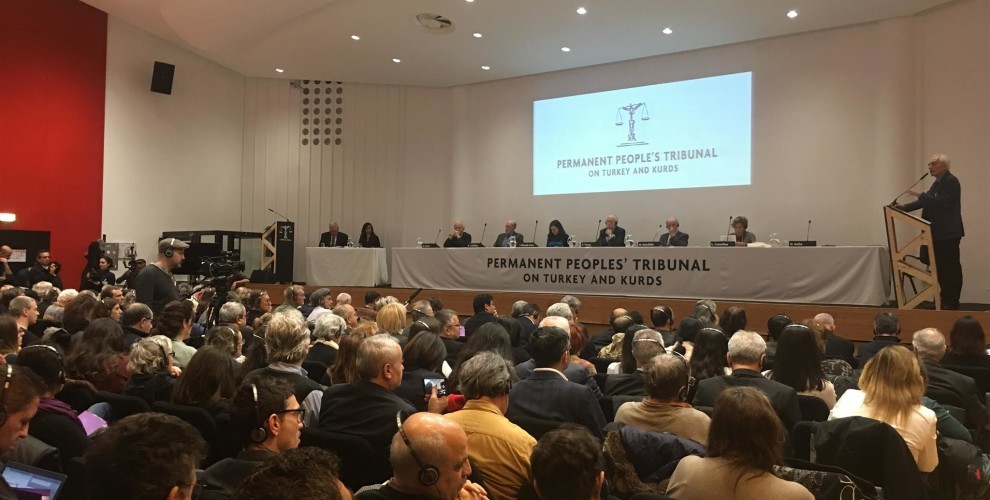 The Permanent People’s Tribunal issued a call in defence of the Kurdish people and of the rights of peoples.

The call reads: «The ongoing tragic events in Syria, where Erdogan’s violent attack on the Kurdish people of Syria has translated into direct massacres and massive expulsion and migrations of the civilian populations, coincide dramatically with the absence (which cannot but be considered a substantial connivance) of the community of states and of its supreme representative organisations.

Confronted with the factual evidence and the extreme gravity of what is happening — which corresponds to the most serious crimes recognised in international law (war crimes, crimes against humanity and an ongoing genocide) — the measures which have been adopted and recommended are nothing else than declarations of the powerlessness of the much-proclaimed “international community”. The responsibility for what is happening must therefore be placed not only on the direct actors themselves but on the entire system of politico-military powers, which are long-term protagonists of strategies based only on reciprocal blackmail.

In continuity with its 46° Session held in Paris in 2018 and in strict coherence with its Statute, whose terms of reference are the concrete recognition and the defence of the peoples’ rights, specifically and principally when they are systematically violated, the Permanent Peoples’ Tribunal (PPT), fully shares and endorses all initiatives aimed to denounce, resist and confront the brutal and exclusive logic of power and violence, which is presently dominating the Middle East.

It is, however, at least as important, in the view of the PPT, to underline how the ongoing tragedy appears as a true and comprehensive laboratory demonstration of a global system that has decided to eliminate human and peoples’ rights from its agenda of values and practices. The Kurdish people, like the tens of millions million displaced people around the world, are cancelled and ignored as subjects of rights, to be considered nothing but objects, to be pushed out and interchanged, not to mention actively disappeared. The Middle East, where frontiers are the irresponsible and disastrous product of European colonial policies, is every time more clearly the location for an experiment in which strategic and economic powers and interests deny the identity, and therefore life itself of peoples, children, women, men, who are supposedly the subjects of the new international law proclaimed by the UN.

It is all too easy to say that nothing is new in today’s Syrian drama, which is targeting the Kurdish people in particular. The growing countless list of peoples who have been reduced to objects of exchange is long: Palestinians, Rohingyas, Yemenis… It is even more clear that this absence of novelty coincides with an aggravation of the conniving inertia of the “international community” and of the individual protagonist states, in the logic and the market of war.

The PTT is well aware of the difficulties of qualifying systemic responsibilities according to the framework, the terms of reference and the prolonged time taken to reach a criminal judgment as foreseen by international law and implementation of the Statutes of the International Criminal Court and the International Court of Justice.

But these should not preclude us from qualifying in the proper terms what is happening before our eyes, for that would mean committing the fundamental “crime of silence”: all the more unacceptable and intolerable in the face of the destruction of the social structures the Kurdish people were developing, notably with the decisive and innovative contribution of women, in Afrim, Kobane, Rojava….

These were the concrete expression of the possibility of a society where the recognition and the practice of all the indivisible human rights are seen as the only effective barriers against their denial, and against the violence of military and economic interests and the many languages, which transform human beings into enemies to be eliminated.

The Presidency of the PPT, in the name also of all the peoples whose struggles for a life in dignit and self-determination have been brought in testimony before it for adjudication during its 40 years of hearings, is confident that this statement will contribute to the strengthening of the worldwide platform of all those who are not ready to accept the impotence of the right against power. Peoples must regain their visibility, their voices, their role as judges of the violators of their rights and protagonists of a history for humankind with a future.»