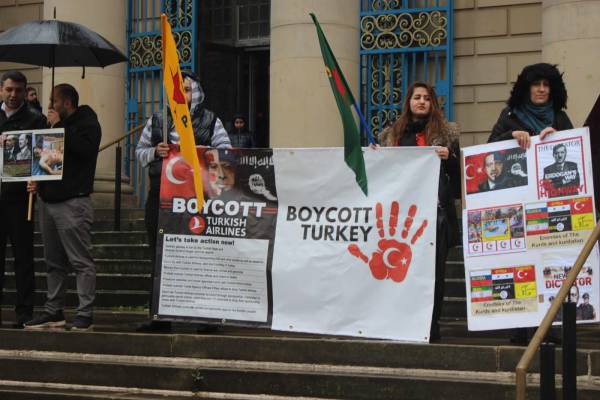 Thousands of people gathered in many British cities to mark World Rojava Day on Saturday.

Thousands of people gathered in many cities of Britain to support Rojava and condemn the attacks carried out by the Turkish state.

The march went from Marble Arch Square to Trafalgar Square.

Hayko Baghdad, Armenian writer and journalist, said that the Turkish state has a genocide plan against the Kurdish people just like a century ago it had one against Armenian people.

Speaking after Baghdad, Simon Dubbins, International representative of the Trade Union UNITE reiterated the support to Rojava of its organisation.

Co-chair of Kobanê People’s Assembly, Enver Muslim, said that the aim of the Turkish state in Rojava was to carry out a genocide through the change of the demographic structure.

Hundreds of people gathered in Liverpool to support Rojava and condemn the attacks carried out by Turkey.

In Brighton, anti-fascist groups marked Rojava Day with a panel about the Rojava model.

A sale was organised to support Heyva Sor.

In Sheffield, hundreds of people gathered in front of the town hall. Activists called on people to boycott Turkish goods.

A demo was held in Hull. Kurds and their friends gathered in Victoria Square to mark World Rojava Day in an action promoted by the UK Kurdish Assembly. An information tent was put up in the square to denounce Turkey and the use of chemical weapons against civilians.