World Resistance Day for Rojava. A poem by Séamas Carraher 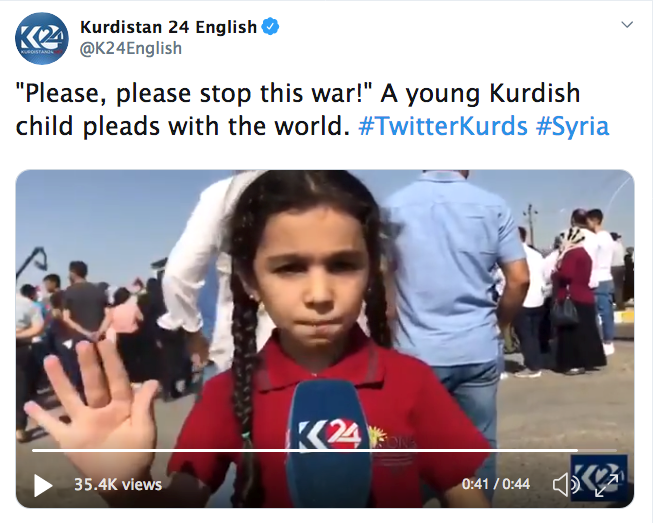 “To UNICEF, to United Nations to Trump

I am Eva from Rojava, from Kobanî, Afrin, Qamishli,

I am a stolen child I am a forgotten child

I have never held a weapon

I just have a wide heart

will you give me peace..?

Will you give me my childhood?

…And this is my message:

to Kurdistan 24  interviewer on

Truly We Live in Dark Times

What kind of times are they, when

A talk about trees is almost a crime

Because it implies silence about so many horrors?

we live in dark times

when the fate of four million people

by a handful of

when the voices of

when under the flag of the butchers

a handful of killers wait

to unleash slaughter on humankind.

Truly we live in dark times

when our world is shaped

with only cunning and greed

the twisted mouths of politicians

while the bankers and the businessmen

Truly we live in dark times,

when it rains fire and sharp steel

who ask you and me

why did you do it?

why do you let it be done?

and worst of all

why are you so silent when I am in pain?

Truly we live in dark times.

Now they even light the silence

while the world hides its face

in front of a TV screen.

We live in dark times

for i see now

fleeing across the face

of our desolate planet

while this handful of

for another round of applause.

«Please, please stop this war!» A young Kurdish child pleads with the world.

Alternative Online translation of An die Nachgeborenen / To Those Born Later

“But we will not stand by and witness in silence the massacres that take place in the eyes of the world today. Only a broad and resistant anti-war movement will stop this war. Just as people were pouring worldwide into the streets against the Vietnam War or the US invasion of Iraq in 2003, the conscience of humankind must rise in revolt today in the face of the Turkish barbarism in northern Syria.

On November 1st, 2014, millions of people around the entire world took to the streets for a day to express their solidarity with the heroic resistance of Kobanê. We call for this year’s November 2nd to be a day of global resistance against the Turkish War of Aggression, to break the normal situation and to paralyze life. Participate in creative and diverse actions of civil disobedience, demonstrations, and many more, and take over the streets and public spaces.”

“The peoples of northern and eastern Syria have shown unprecedented resistance to the occupation of Turkey and have sacrificed hundreds of martyrs. To defend their dignity and their country against occupation and IS, they were on their feet day and night. This resistance and the defence of society by the peoples of Rojava still continues. We appeal to all peoples in Northern and Eastern Syria to join in action this day with thousands of people on 2nd November and to make the “International Day of Resistance for Rojava” tremble with the power of freedom and resistance.”

Kurdistan, Northern and Eastern Syria, Rojava, Syria, Top
You may also like