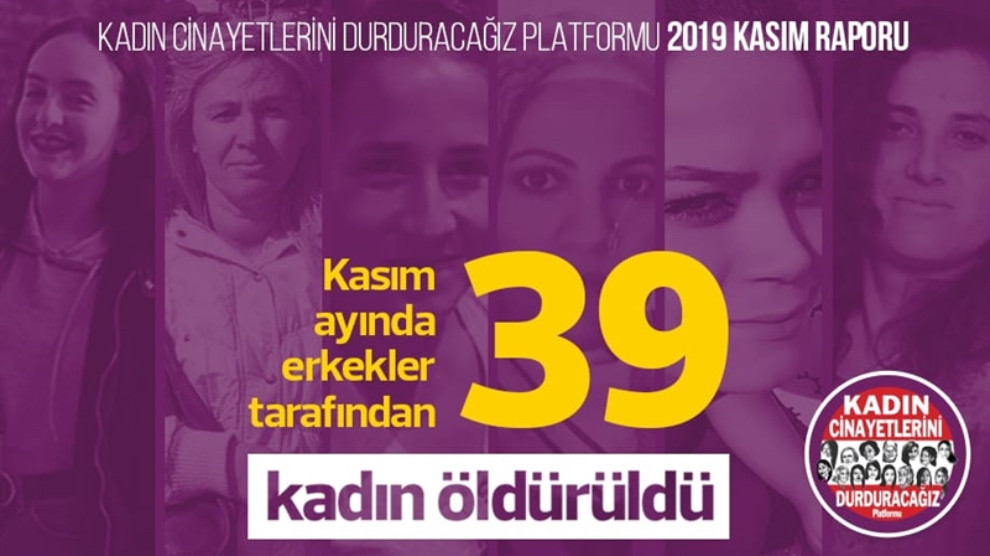 According to the November report of the Platform to Stop Murders of Women, 39 women were murdered in Turkey in a month. In the first 11 months of the year, at least 430 women were killed by men.

The report on women murdered in November said that «unless it is determined who and why women are being killed and unless a proper trial is celebrated and suspects, accused and murderers receive dissuasive penalties and preventive measures are implemented, violence and murders will continue to grow.»

According to the report, 39 women were killed by men in a month. According to the same report, while 11 of the murders were recorded as suspicious deaths, in the case of 19 murders it could not be established the reason for the killings, 4 women were killed for economic reasons, 5 because they wanted to get a divorce, refused their partner request for reconciliation, wanted to change their life.»

Women were murdered in a total of 20 cities, with Istanbul and Antalya ranking in the first two positions.

Who are the murderers?

The report listed the murderers as follows: «It was not possible to establish who killed 11 of the 39 women murdered in November, while 11 women were killed by their husbands, 2 by former husbands, 1 by a former boyfriend, 4 by their father, 3 by their relatives / acquaintances, 2 by their sons, 1 by her brother and 4 by their current boyfriend.»

The report stated that most of the women were killed by firearms and that the killings happened mostly at home.

Kurdistan, Murder, Rojava, Top, Turkey, Women
You may also like