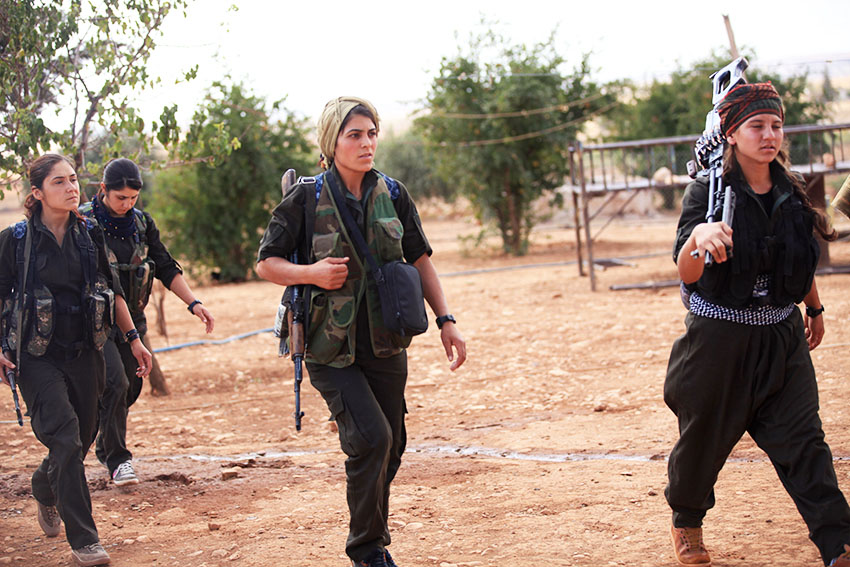 Meryem Kobane was the general commander of the ypj (women’s defense units) in the region of kobane.
Under her command the YPG (people’s defense units) and the YPJ have resisted the siege of the city by the jihadist for 4 months and have defeated the islamic state in january 2015, thus sanctioning the begin ning of its end.

The defeat of Kobane was also a defeat of Turkish President Recep Tayyip Erdogan who during the siege of the city in 2014 had declared: “Kobane is about to fall. And if it hasn’t fallen yet, it will fall.”
It did not happen.

Today, commander Meryem Kobane tells Global Rights Magazine: “In Kobane, our people fought for all of humanity. What inspired us during the months of siege was also international solidar- ity, in particular the one expressed by women who sent us their support from all over the world. Today in Serekaniye and in the North East of Syr- ia the Kurdish people are fighting again for all humanity. Not supporting the Kurds right now means writing a black and shameful page in the history of the 21st century.”

What message would you send to the interna- tional community?
There are two places where decisions are made: the United Nations and NATO. It is there that the international community and in particular wom- en must go and shout loud and clear that the ag- gression carried out by Turkey must be stopped. Those who were praised yesterday as heroines and heroes around the world, the YPJ and the YPG, cannot be invisible today. That’s why we ask friends all over the world to make their voices heard in places of power

You especially appeal to women …

Yes, because in Serekaniye and along the entire border there are once again women on the front line to defend the honor of our people, the memory of our martyrs, but also our achievements.
Because the struggle for freedom has been and is above all the struggle for women’s freedom. This is why it is not enough to demonstrate in the streets. It is important to go to the centers of power where decisions are made and to tell what we are going through at this time in the northeast of Syria. Women must denounce how Turkey is killing chil- dren, women, young people, the elderly. Why Erdo- gan has the same face as al-Baghdadi [the head of
the Islamic State killed in a US operation on Kurd- ish intelligence on 26 October 2019.]
This war cannot be stopped with words but with practice and this means constantly exposing the Turkish crimes in the places where the interlocu- tors of this war are found. And I refer mainly to the United States, but also to Germany and the United Kingdom.

The Turkish invasion began in Serekaniye, and not surprisingly…

Serekaniye is a historically important place for the Kurds. This is where the Rojava revolution began. It is here that coexistence between different nations
has flourished in recent years since the liberation of the city, in July 2013.
Here Kurds, Arabs, Arameans, Assyrians and Chech- ens lived in peace and harmony. And it is also here that Tell Halaf is located, the place gave its name to the Halaf period, between 6100 BC. and 5400 BC.
It is no coincidence that Turkey has begun its in- vasion from here. Because the goal is certainly to exterminate the Kurds but also the other cultures that live peacefully in this region under the Autono- mous Administration born with the Revolution.

Turkey has since the beginning of the offensive also attacked the prisons where the mercenaries of the Islamic State are detained, as reported by the Syrian Democratic Forces (SDF).

This is the confirmation that Turkish President Er- dogan wants to free the mercenaries. His goal is to reactivate the Islamic State. It is in the interest of the whole world to prevent this war from continuing. Because if action is not taken
immediately, everyone will be complicit in the re- turn of a reactionary mentality and practices that are those of Erdogan’s Turkey and its mercenaries of the Islamic State, al-Nusra, Daesh or whatever the name of the organization they are part.
As for us, the Kurds, we will resist because resis- tance is our freedom. The Kurds will resist wherev- er they are. But this, I want to reiterate this, is not just our struggle. If this war doesn’t stop, the conse- quences will be catastrophic for all humanity.