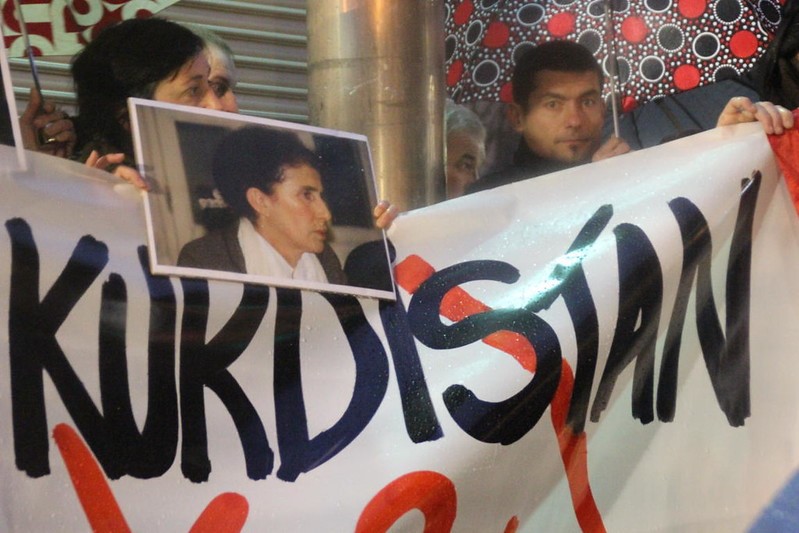 This Thursday marks the 7th anniversary of the political murder of these three Kurdish activists in Paris, France; they were found at 01:15am, in the Kurdistan Information Centre, “…on the busy street of Rue La Fayette so close to the Train Station Gare du Nord in central Paris…” “Two of the women were shot in the neck while the third had wounds to her forehead and stomach, the Kurdish federation said.” (Hurriyet Daily News)

Sakine Cansiz, was, at 54, one of the original founders of Turkey’s revolutionary Kurdistan Workers’ Party (PKK) and suspected to be the main target of the assassin. (Global Rights)

“She was one of the first women to join the Kurdish freedom movement, before it even had a name. She was one of only two women to participate in the PKK’s 1978 founding congress.  In May 1979 she was arrested, and like everyone who refused to buckle under arrest or betray her comrades, she was tortured harshly. She was the first woman from the Kurdish freedom movement to mount a political defense in court. Among the prisoners she was considered a leading personality. For 12 years in various Turkish prisons, she maintained a resistance. Soon after her release in 1991, she did legal work at the party academy in Lebanon and from there went to the guerrillas in the mountains.” (Pluto Press)

So far no one has been tried for the murder of the 3 Kurdish activists: “But French investigators had concluded that members of the Turkish national intelligence agency MIT were «implicated» in the triple murder, according to legal sources.” (France 24)

In May, 2019, French prosecutors reopened their investigation into the 2013 murder, “The probe had not identified the perpetrators who gave the order, however signs showed links to Ankara.” (scf)

Murdered by schoolmasters: the shape of

the art of bodies, their growth and biology,

both scrambled and unscrambling.

(with tongues twisted and ears deafened):

cultivation, the lives of animals, the

eloquence and statesmanship of trees,

the secrecy of secrets, their mystery,

this language we lost,

and this mouth that lost it,

and loss, left now in its abandoning

and in its place,

Lost to policemen and judges, history,

justice, our love of peace, freedom from revenge,

in a darkening sky this dialogue,

arms to wrap the human heart in,

in a time without hands

for all their cruel burning.

Murdered by the family: love, the

rhythm of breath in copulation,

murdered: this wife, her husband, these children,

(in a circling hardened in contracts)

the arrangement of furniture (physics and astronomy)

the creation and renewal of order,

the removal of dust from brains,

the human embrace, and these same arms

and these arms, (these same strong arms splintered and

and in its place:

dumb authority, and the boots of

Lost to the shopkeeper: arithmetic, instinct,

the light of brotherhood on this dark journey

road, pass and map of humanity,

the content of names, life and death, its simplicity.

and in their place:

dull creatures of theology, of religion,

of bargain and theft,

of profit and flesh in pounds and ounces,

in ingots, reserves and economies,

in world-bank and stock exchange,

in railroad and ovens,

no longer our human, nor love, nor loss,

only hair, teeth and gas, vermin,

in sales, reductions, starvation and famines

and the hearts sharing, and our mingling hearts,

shipwrecked and ragged and in the dark night,

and the hand that gestures is murdering

and murdering it contains in its loss

and in its continuing with all my shells

and mine and ours, O my love, and all loss,

Lost by all rulers, popes, bishops, and

the skill of wisdom

the love of truth

the nurturing of growth and its mystery,

the friendship of love,

the healing of sorrow

all the journey and our travelling upon it,

and in its place: rentmen, servants, landlords, surgeons,

and in its place: priests, accountants, clerks and doormen.

Lost ourselves by the weight and complicity of loss,

our own face, features both familiar and strange,

a place of our own, a home to nest in,

refuge, shelter, this heart and its feeling,

that other that is part of me,

that me who is circumnavigated by the other,

my own self and its other,

my coming and going,

and its parents, brothers, sisters, comrades;

lost my life and lost my death,

and in its place only dying, perpetual, continual,

all murdered, my desire murdered,

my length and breath dissected,

my ugliness sanitised and made sterile,

and in its place, (this roofless place)

these schoolmasters, this family, these shopkeepers,

marching in their coarse armies

across our dead breathing.

Lost, finally, in my murdering,

this simple mouth and its speeches through the teeth,

its longing for my returning,

in days without measure and the chains breaking,

and its longing and our returning

in our homeless way

Sakine Cansiz, I lived fighting all my life – Part One