Home > Talking Kurdistan > Who are the terrorists 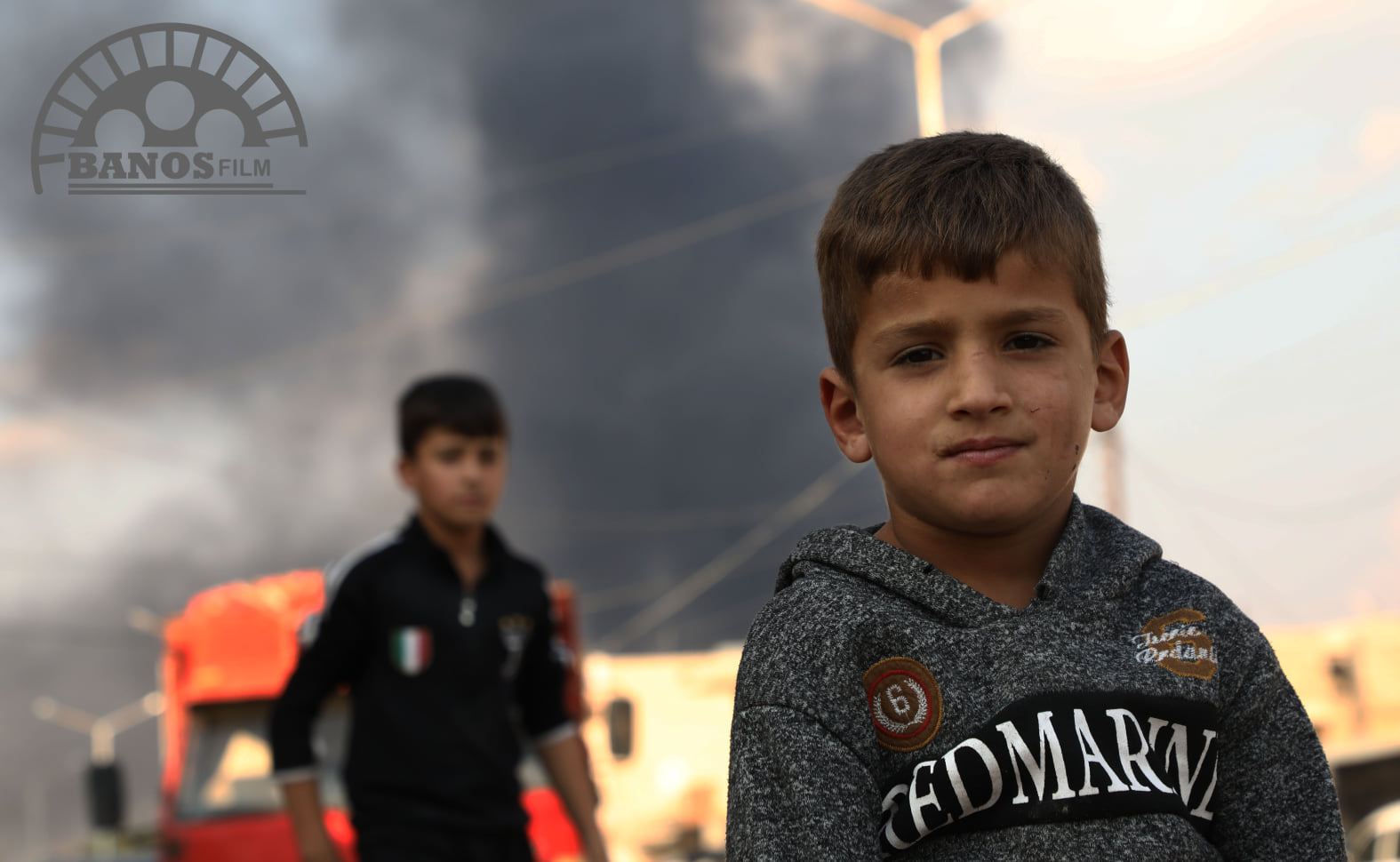 According to the plans and propaganda of Erdogan, the safe zone, 30 kilometers deep, he secured in north-east Syria with a military occupation opera- tion, will constitute a valid and necessary “barrier against terrorists”. The other and main objective was to secure a territory to resettle a good part of the more than three and a half million Syrians who had escaped the war and who are currently de- tained in Turkish refugee camps, based on agree- ments with the European Union which rewarded the infamous service with six billion euros.
For the ultranationalist sultan, the PKK (Kurdis- tan Workers’ Party), but also the PYD (Democratic Union Party) of Rojava and, in general, the Kurd- ishpeoplearenothingbutterroriststoannihilate, as indeed he has been trying to do that for a long time.
“Terrorist” is a definition which is now increasingly becoming an “umbrella word”, under which to en- close the most diverse phenomena; a label that is readily attributed to the enemy, never to friends,
accomplices or allies, and much less to oneself. It is those who have the power to dominate the me- dia and to write the History who confer this quali- fication or don’t.
The Israeli Menachem Begin had been head of the Irgun, a Zionist paramilitary group, until its disso- lution in 1949; he was wanted internationally for terrorist crimes, including a bomb detonated in 1946 in a hotel in Jerusalem, claiming 91 victims. Later, he became Prime Minister of Israel from 1977 to 1983 and was even awarded the Nobel Peace Prize in 1978: massacres and bombs, in short, are sometimes considered a praiseworthy viaticum for peace, a legitimate and worthy practice, albeit substantiated in indiscriminate murders. Even more true for the massacres directly carried out by a state power, and even here the examples and references could be many and too many, starting with the “industrial” massacres, that is to say from wars in all their declinations, aggression, robbery or “humanitarian”. Terrorist is the one who loses them, hero and patriot who wins.

Turkey, the godfather of Daesh

Coming to recent times, in much of the world Dae- sh/Isis, the self-proclaimed Islamic State, is unan- imously judged and condemned as a bloody ter- rorist structure. A phenomenon, however, whose origins, ties and characteristics are avoided and not reconstructed: “Daesh has a mother: the inva- sion of Iraq. But also a father: Saudi Arabia and its religious-industrial apparatus.
Saudi Arabia is a successful Daesh”, has effectively summarized Kamel Daoud, Algerian intellectual and journalist. It could be added that Daesh also had a godfather, very protective and benevolent: Erdogan’s Tur- key, precisely the one who accuses of terrorism the Kurds, or those fighters who, organized in the Syrian Democratic Forces, militarily defeated the Islamic State, being allied with the US-led coali- tion, with that same Donald Trump who has now betrayed them by handing them over to the fierce revenge of Erdogan, gratifying them also of the
posthumous judgment of being “more dangerous than ISIS”.

In the changing game of alliances between pow- ers, realpolitik and cynical and hypocritical turns, in the past years even Russia had openly accused Erdogan and his family of managing illegal traffick- ing with ISIS the oil which he “stole from the legiti- mate owners of the Syria and Iraq”. Just as Turkey itself was suspected of arming, training and man- aging across its borders the flow to Syria of foreign fighters eager to enlist in jihadist militias and even to cut off some Western heads.

The business of the war on terror

Nothing new: consistency, loyalty and objectivity certainly do not belong to those states and gov- ernments whose primary interest is to oppress the people and to favor that “military-industrial and political complex” of which we have already spoken (“Global Rights”, No. 1/2015). Indeed, oil and war corporations have always been a government within governments, starting with the US one. Over 3 million and 200 thousand people work for the Pentagon alone, over one third of them military, 742 thousand civilians, 826 thousand in the National Guard and in the reserve forces; that Department of Defense (but it would be more ap- propriate to call it of Offense) owns hundreds of thousands of buildings and structures scattered over more than five thousand sites, assets for over 2,400 billion dollars and manages a budget which, in 2018 alone, was 639 billions of dollars. Together with the many other military bodies, in- telligence agencies and those of scientific, spa- tial and technological research for war purposes, it constitutes a sort of State within the State, with enormous resources and a large yet opaque and elusive power.

It is a lump of interests that has managed to make a huge new business out of the war on ter- ror not only a political but also an economical one, parallel to that of the traditional war, includ- ing privatizing and outsourcing numerous activities to contractors and external companies. Just a few figures: from the attack on the Twin Towers in 2001 to the beginning of 2018, the US spent $ 2,800 billion on fighting terrorism; in those years, as much as 16 percent of the US budget was des- tined to combat Islamic fundamentalism.
The figures on world arms trade are also impres- sive. The United States is also a lion’s share here, with 36% of the global volume of business, and being Turkey’s leading supplier.

From the attempted coup to the real one

Among the effects of the attempted coup against Erdogan in July 2016, is having cracked his rela- tions with the United States, which he suspected of being the coup sponsor, and, conversely, those of having strengthened the understanding with Vladimir Putin, who would have instead alerted him about the current danger.
In reality, the failed coup was a precious opportu- nity given to the Turkish president for a very heavy, and still lasting, internal repression against ev- ery opposition as well as for a further strength- ening of its powers. A partial balance shows 4,279 dismissed judges, 3,000 of them arrested and in pre-trial detention, hundreds of radios, newspa- pers, websites have been closed, 150 journalists are still in prison, while thousands of teachers have been removed from their posts in the uni- versities and schools.

To the direct and “legal” state repression, the special laws, the curfew, the bombing of PKK settlements in the Kurdish cities of southeast- ern Anatolia such as Cizre, Sirnak, Nusaybin and
Sur, with many thousands of civilians killed and tens of thousands of displaced people were also joined by the “dirty war”, with thousands of cases of forced disappearances, extrajudicial execu- tions, with massacres and attacks, such as the one in Ankara that on 10 October 2015 caused about 100 victims during a public meeting at- tended by members of the HDP, the Peoples’ Democratic Party, associations, trade unions and peace activists, with targeted killings even in European countries, such as the one that took place in Paris on 9 January 2013 where three Kurdish militants, Fidan Dogan, Sakine Cansiz and Leyla Saylemez, were executed.
A murder for which the responsibility of senior officials of the Turkish secret services have emerged.

The Turkish state crimes are therefore innu- merable, although still tolerated for various reasons and mutual convenience by the inter- national community, Europe and the USA, as we have seen again at the time of the Turkish inva- sion of Rojava and the subsequent acceptance of the status quo for the benefit of Erdogan.
But if his regime can still impose itself with force and blackmail, with NATO weapons and
bases present on its territory, it cannot prevent the clear truth from emerging in the conscious- ness of global democratic public opinion: the terrorists are them.