Today the great Kurdish director Yilmaz Güney will be 83. He died prematurely in 1984 in Paris, where he was exiled. In 1982 he had won the Cannes Festival with the masterpiece “Yol” 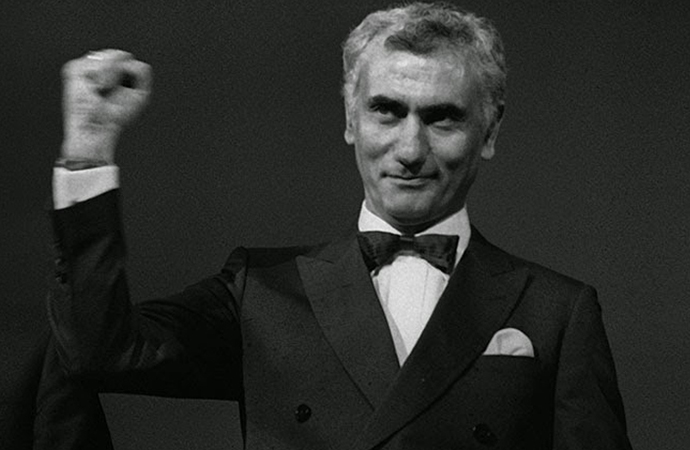 Today the great Kurdish director Yilmaz Güney will be 83. He died prematurely in 1984 in Paris, where he was exiled. In 1982 he had won the Cannes Festival with the masterpiece “Yol”.

To pay tribute to Yilmaz Güney we repropose an interview with cinema director Fatih Akin.

When “Duvara karsi” (“Against the wall”, distributed internationally with the title “Head On”), made its appearance on the screens of the Berlinale in 2004, it surprised many people. The harshness and the rage of that film, in fact, was clearly recalling the works of the Kurdish director Yilmaz Güney. At that time, the director of Duvara Karsi was a young Turkish filmmaker born and grown up in Germany. Today, Fatih Akin is one of the most appreciated directors, working in between Europe and Turkey, the West and the East.

“A link” as he likes to define himself: not by chance he chose a bridge, the one on the Bosphorus, as the symbol of the film that followed Duvara Karsi: “Crossing the Bridge. The Sounds of Istanbul”, a documentary on the traces of the thousand sounds of Istanbul. Another way to show that, despite of the ideology of Ataturk followers, Turkey is much more than one. There are a thousand Turkeys in Turkey and in Europe. In Hamburg, where he’s born and grown up (in the Turkish-Kurdish neighborhood of Altona), Akin is now working on a new documentary, telling the struggle of a small town on the Black Sea (where Akin’s grandparents are from) against the government, who is planning to build there a garbage dump. Also this documentary, like Crossing the Bridge, comes after a feature movie, that is “The Edge of Heaven”, being the second part of a trilogy on love, death and the devil, that started with Duvara Karsi.
A few years ago the young filmmaker has been contacted by Fatos, the widow of “the Ugly King”, that is how Yilmaz Güney was called.

“Her proposal – says Akin – came to me as an extraordinary one. She asked me to make a film on the life of Yilmaz Güney. I immediately started to make researches and interviews in order to understand as much as possible on the life of this extraordinary man. This director who had been so influential on my career.”
Let’s start from the beginning: how did you first met with Güney’s cinema?
The first film I saw was Yol (The Road). I was 12 years ago and living in Hamburg at that time. I remember they showed it on television, so we decided to record this film that had become so popular at that time. You should know that my family was a pretty conservative one, coming from a small town on the Black Sea. My father came to Germany to work, and my mother decided to follow him soon afterward. She used to teach to Turkish children. Thus I was born here in Hamburg. My parents gave me a lot, but as often happens, the ideas of the sons don’t come to match the parents’ ones. Before having the opportunity to watch Yol, I remember of a scene at some of my parents’ friends’ home. It was 1983 or 1984. My parents’ friends were much more leftist and progressive than my parents. And they were teachers, too. That evening I remember there was a lively discussion, as passionate as a political discussion can be, on Yilmaz Güney. That dinner came back to my mind when, a few years later, I watched Yol. I didn’t get much of the film at that time, but I remember it impressed me a lot. Or I should say shocked. For a 12 year old kid, it was definitely shocking to see a mother dying in the middle of the snow. When I started to make films I was 22 years old. At the beginning I wanted to avoid being a “political” filmmaker, but soon I realized that everything you do is about politics, even if you fill peoples’ heads with banal things you are doing politics. It was at that time that I rediscovered Yilmaz Güney. It was 1997. I watched his movies in my neighborhood’s library, where they used to have a lot of Turkish stuff. I’ve seen Sürü, Endise. I didn’t know Duvar, that I only came to discover some years later.
Then you met Fatos Güney…
Before meeting her I had read something about Elia Kazan, and when you make some research on Kazan, sooner or later you find the name of Güney. After the invitation of Fatos, I fully immersed myself in a research on Güney. I went to interview his son and then his daughter who lives in Paris. I spoke a lot with Atif Yilmaz, who died just last year, and who was the one who discovered and launched Güney. I spoke with Tuncel Kurtiz, with whom I then started to work. And I read lots and lots of material. But the more I went on with my research, the more I felt I was getting far from the project.
Which is the legacy of Yilmaz Güney?
Güney was a warrior. He lived his short life with intensity and passion. His movies are full of passion. And this has been inspiring a lot of people, including me. He had a passion devoid of any compromise: an extraordinary strength. He’s been a master of “realist” cinema. He himself had been inspired by the Italian “neo-realists”. I think about Umut (Hope), one of his first works. It immediately reminds you of De Sica’s “Bicycle Thieves”, but also of Pasolini’s “Accattone”. Contemporary Turkish cinema is still inspired by this basic dry realism, this capacity of saying lots of things using just a few scenes.