İbrahim Gökçek, a member of Group Yorum, who has been on death fast for 304 days, said that there is no other way than resist and called on people to play their part 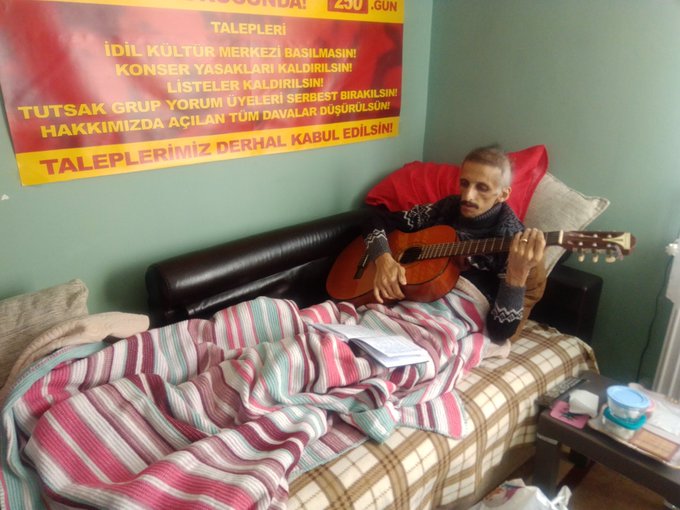 Group Yorum member İbrahim Gökçek has been on death fast for 304 days, demanding the lifting of concert bans, the end of arbitrary detention, the release of the other members of the band.

Calling on people through social media, Gökçek said: “Hello everyone. We continue to resist for our rights. We have no other way than to resist.”

Calling everyone to play their part, Gökçek underlined that their resistance is for the freedom of thought and culture.

Another Grup Yorum member, Helin Bölek, died on the 288th of a hunger strike-turned death fast. She protested the repression of her group and its supporters in Turkey and abroad by the Turkish government, led by President Erdogan.

Grup Yorum demands the right to sing freely, an end to the arrest, imprisonment and torture of Grup Yorum members and supporters, and an end to the ban on Grup Yorum concerts, which have been prohibited for nearly three years.

On 5 April 2020, Lawyers’ Day in Turkey, two lawyers who had defended Grup Yorum and been sentenced for terrorism-related offences, turned hunger strikes into death fasts.