There are 1,297 confirmed cases of Covid-19 and four deaths in Colombian prisons (on 27 May). In Brazil 755 cases of coronavirus and 29 deaths in prisons across the country 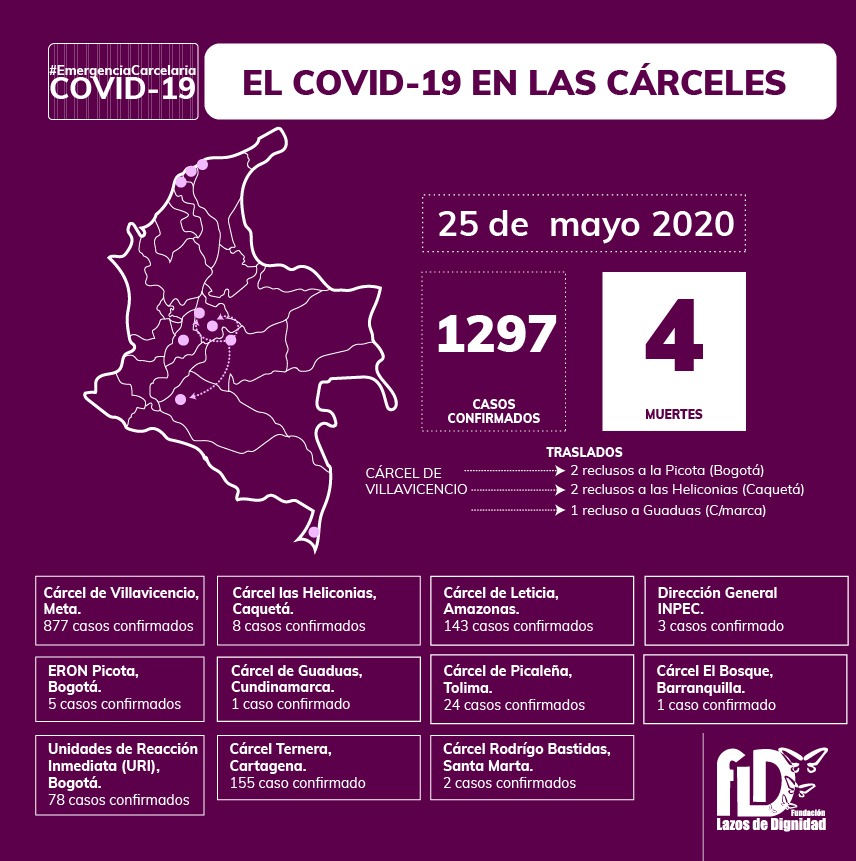 Since Covid-19 was classified as a pandemic, people deprived of liberty in different jails of Colombia, as well as their families, have protested against the government negligence to prevent the spread of this disease within the prisons.

Many prisoners in addition have filed complaints about the mistreatment and the constant harassment by guards.

Overcrowding is one of the main causes of violation of the rights of prisoners. Of the 138 penitentiary centers in the country, 129 are overcrowded. The prisons with the highest number of prisoners are in the cities of Santa Marta (Magdalena), Magangué (Bolívar), Valledupar (Cesar), Villahermosa (Cali) and Bogotá.

“The dramatic increase in overcrowding figures (from 27.8% to 53.7% in the last five years) shows that there has been no comprehensive government policy on prison and criminal matters that allows overcoming structural problems,” said the Solidarity Committee with Political Prisoners – CSPP.

The problem, as the Committee underlined, is that solutions to overcrowding have not been implemented, nor have pandemic protection projects been developed for inmates and prison guards.

According to the Foundation Lazos de Dignidad, there are 1,297 confirmed cases of Covid-19 and four deaths in Colombian prisons (on 27 May). Villavicencio (Meta) prison is the most affected, with 877 confirmed cases.

If the situation for prisoners in Colombia is apalling, in Brazil it is possibly even worse. Here overcrowding problems have been increasing tension after the coronavirus pandemic spread among the prison population. In Brazil as a whole, there are 374,898 confirmed cases and 23,473 deaths.

The National Penitentiary Department (Depen), the state agency responsible for a prison population of 758,676 detainees, had confirmed at the end of last week 755 cases of coronavirus and 29 deaths in prisons across the country.

However, the number may jump in the next national count, which will be published in the coming days, because on Monday the Papuda Penitentiary Complex (in the Federal District of Brasilia) alone had registered 671 confirmed cases among prisoners.