Betlehem Isaak, Dawit Isaak’s daughter, was seven years old when her father, along with ten other journalists and eleven other reformist politicians were arrested. She says she has vivid memories of the day he was arrested

Bad enough silence is part of our existential condition (despite how much we pretend or protest) – belonging to a small, if significant species on the edge of an enormous universe; and yet, as if being abandoned in empty space was not sufficient…

…in the State of Eritrea, the silence is no longer a natural tragedy affecting citizens on their journey from womb to grave…

…but rather an ongoing and sustained outrage – a crime against humanity – as well as a bitter testament to the crippled and crippling conditions that our human societies have not managed to find freedom from –  in all our so called ‘progress’.

Betlehem Isaak, Dawit Isaak’s daughter, was seven years old when her father, along with ten other journalists and eleven other reformist politicians were arrested. She says she has vivid memories of the day he was arrested.

“I remember my haircut and the dress I was wearing,” Betlehem tells Radio Sweden, “but I didn’t know then that my life would change forever”.

Dawit Isaak, her father, Eritrean writer and journalist (also a Swedish citizen) has been held in President Isaias Afwerki’s repressive prison system since that day, September 23, 2001; being held incommunicado without either charge or representation, despite an ongoing international campaign to have him released.

As to Sweden’s protests: “On May 2009, President Afewerki says: ‘We will not have any trial and we will not free him. We know how to handle his kind. To me, Sweden is irrelevant. The Swedish government has nothing to do with us’.” (May, 2009)

Dawit returned to Eritrea from Sweden following its independence from Ethiopia in 1994 as an accomplished writer and with the hope of contributing to the development of an independent Eritrea.

“This was at a time when the streets of Asmara were seething with political debates. Many felt that Eritrea was on the brink of an even greater challenge than the thirty years long Eritrean War for Independence. The country had all the chances of becoming a leading nation on the African continent. Those of us who were living in exile had great hopes set on Eritrea. Dawit and his colleagues on the newspaper Setit went there to write about the citizens’ longing for democracy, the farmers’ rights to their own land, or the right to be adequately informed about HIV.” (Esayas Isaak writing about his brother in 2015)

With this in mind, in 1997 the writer, along with some other journalists,  established “Setit”, Eritrea’s first independent newspaper. “By 2000 the aspirations that independence will bring freedom to the people of Eritrea begin to dim in the now one-party-state of President Afwerki and a developing opposition (later named “G-15”) begins demanding free elections and for the proposed constitution to be implemented.”

“Not to be.” From 2001 up to the present the Eritrean regime of the dictator has consistently rejected all criticism and instead established a system of repression involving disappearance, extra judicial assassination, torture and imprisonment that a United Nations report in 2016 (‘UN Inquiry finds crimes against humanity in Eritrea‘) has described as being second only to the profound lack of human rights in North Korea: “…imprisonment, enforced disappearances, persecution, murder and other inhumane acts have been committed as part of a campaign to instil fear in, deter opposition from and ultimately to control the Eritrean civilian population since Eritrean authorities took control of Eritrean territory in 1991.” (Global Rights)

Conditions are so harsh in the country that some years back the U.N. High Commissioner for Refugees estimated that around 4,000 Eritreans flee the country each month, too often losing their lives on the journey.

“Western democracies do snub him, but Afwerki doesn’t need them for loans, investment or stamps of approval. He has China. In 2013, the Chinese government offered the country a $100 million loan to build agricultural infrastructure. A Chinese company owns 60 percent of a gold mine near Asmara, and recently, the $400 million construction contract for a new cargo terminal in the city of Massawa was given to — you guessed it — another Chinese company.

The president’s relationship with Beijing goes way back, to when — as a wide-eyed 20-year-old — Afwerki was invited to China for military training.” (Africa’s Wannabe Mao with a Moustache)

In all this time and despite substantial calls for his release almost nothing has been heard of Dawit Isaak.

And now, this June 8, 2020 marks the 6,833rd day of his arrest, incarceration and disappearance in the dungeons of another ‘revolutionary’ fighter turned small time gangster-politician and tyrant, in this instance as part of the newly created state of Eritrea…

Despite the campaign for almost 20 years…

Despite numerous appeals for compassion…

Despite the pleas from Dawit Isaak’s family…

Despite the sadness of his daughter, Betlehem…

Despite ongoing and inadequate intervention by the Swedish government…

Despite all this – Day 6834 will arrive with still no trace of this courageous writer with a vision for the future of his country; a vision for a future of freedom that begins with the right to speak freely and openly and the right to criticise our temporary-rulers without fear of torture, disappearance and death…

…Another grim gravestone on a century of ”Marxist” revolutions… one can only wonder what Karl and Friedrich, with a glass of port and a fine cigar in hand, sitting in a northwest London drawing room near Camden Town, would think? 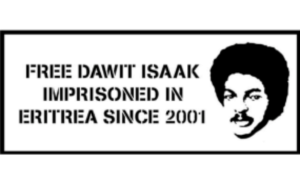 This 24th year of World Press Freedom Day the UNESCO/Guillermo Cano World Press Freedom Prize will also be awarded on the evening of May 3, to Dawit Isaak, the imprisoned and disappeared Eritrean-born journalist, arrested in 2001, who will be represented by his daughter, Betlehem Isaak…We can only hope that news of the award will leak in through the barbed wire and darkness of President Isaias Afwerki’s many dungeons and sustain this long time prisoner-of-conscience.

Send a message to Emanuel Giorgio, Human Rights Deputy of the Permanent Mission of Eritrea to the United Nations

“Why do tyrants jail poets? The answer is simple: they can’t stand any deviation from their prescribed world outlook.”

“We get to read excerpts from the book and understand how tough it has been to live in uncertainty. Among other things, she talks about how much the loss of her father’s presence has affected her entire life, her siblings and her mother’s life. And if the question that most people want answers to is: Why? Why did you go?”

Betlehem Isaak’s words to her father

Dawit Isaak, Eritrea, human rights, Top
You may also like