Macer Gifford: “The Ordinary Man who went to War Against ISIS”

Macer Gifford (Kurdish name) is the former British currency trader who fought with the Kurdish YPG militia against the Islamic State. Gifford fought with the YPG in 2015 and in 2016 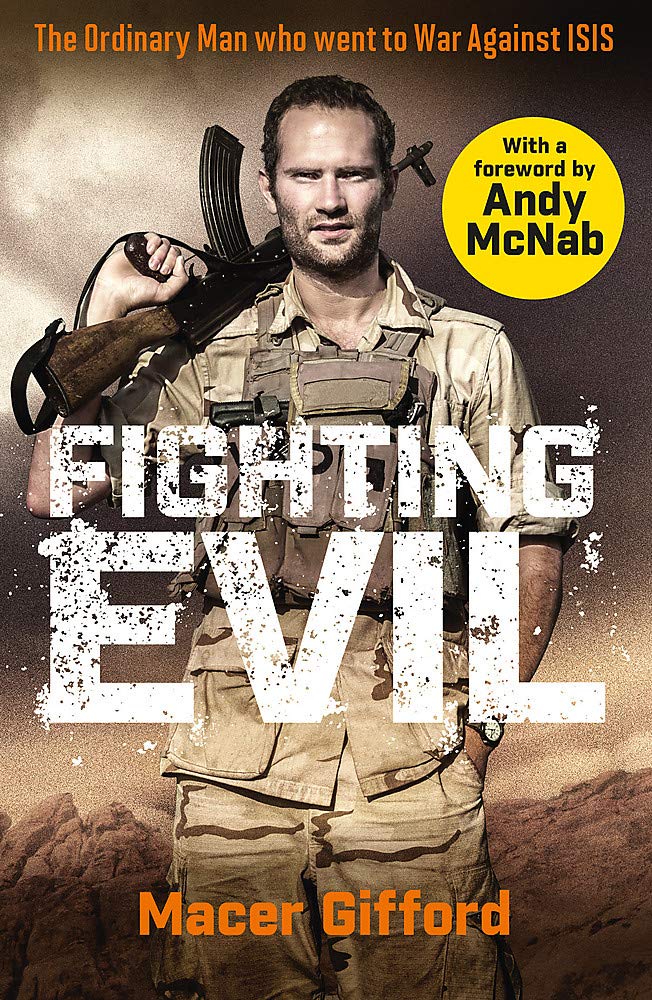 ‘My hatred of ISIS and my fury at everything they ever stood for is as strong now as it ever was. It has never wavered and was my guiding force throughout my time in Syria, pushing me forward, giving me courage and determination and a reason to keep coming back.’ – Fighting Evil, by Macer Gifford.

Just released at the end of May “Fighting Evil: The Ordinary Man who went to War Against ISIS” brings another chapter in the story of the Kurds to an audience many of whom had never heard of Kurds or Kurdistan until their extraordinary and heroic fight against the then-expanding ‘caliphate’ of ISIS/Daesh.

Macer Gifford (Kurdish name) is the former British currency trader who fought with the Kurdish YPG militia against the Islamic State. Gifford fought with the YPG in 2015 and in 2016 took part in fighting around Manbij with the Syrian Democratic Forces (SDF). His final tour was at the siege of Raqqa with a Syrian Christian unit.

Amazon describes the book as: “A visceral, riveting, no-holds-barred military memoir told from the front line of the war against ISIS…

“For Macer Gifford it wasn’t enough to ask why more wasn’t being done, he knew he had to act. So, he left his job in the city, split from his girlfriend and a few weeks later found himself illegally crossing the border into Syria to join the Kurdish YPG in their fight against the savagery of ISIS.

“Macer Gifford became one of longest serving British International Volunteers and one of the only few to be promoted to be a Commander in the YPG. He fought alongside the Kurds (and their Syrian Allies) for three long tours of duty from the dawn of the caliphate all the way to its military defeat in the ruins of Raqqa in 2017, sniping at the final deadly wave of suicide bombers as they burst from the rubble.”

In an interview for Kurdistan 24 Gifford says:

“This book is really an account of the three years that I spent fighting ISIS… It covers some of the worst fighting and the most bloody fighting in Syria and it’s… it’s an intensely sad story in some respects because of the suffering and the deaths of many different people in the book. But, also it’s a story of hope because it also talks about the most amazing people on the planet, both Kurds and internationals, who stood up for the right reasons and who went for the right reasons to fight ISIS and were ultimately victorious.”

Of writing he says:

“I was thinking about it for a number of years. Because, more than anything, I wanted to tell my story, because there’s only so much time that you’ve got in front of an audience or in front of a TV camera to really talk about what you got up to, and what you experienced…

“So, this was a desire to retell my story so people could understand what the international volunteers go through, but it’s a little bit more than that as well. I also wanted to tell the story of the development of the YPG (People’s Protection Units) and the Kurdish struggle against the Islamic State and their eventual victory.”

Of the transformation the Kurds have accomplished in northern Syria despite the Syrian regime of Assad, the cruelty of ISIS and now ongoing vicious assaults by NATO’s second largest army, Turkey:

“The heroic people of northeastern Syria liberated themselves and I watched them do it. So, it was a real privilege, and that’s what I wanted to write about.”

Gifford also pointed out the deadly silence surrounding the many vicious attacks against the Kurds in recent years:

“I think one of the challenges that the Kurds have always had is that they’ve had a bit of a PR (public relations) problem which has improved vastly over the years. Groups like the Rojava Information Centre; they are amazing and do amazing work on spreading news from Rojava (Syrian Kurdistan) to the west.”

With the book, Gifford also tells Kurdistan 24, he wants to reach out “to just ordinary people who have not heard about the fight against the Islamic State, who have not heard about the Kurds. This book will be a journey for them as well to really understand who we’re fighting against, who we are fighting for, and what we did. That’s really important.”

…Any effort to end the silence supporting the oppression that the Kurds in Turkey, Syria and Iran currently experience must be of value in our search for a world of radical democracy, human rights and justice for all, a world waiting to be born.

“I saw an opportunity to help the Kurdish people and (all) the people in northeastern Syria. And I felt like I’ve done that.” Macer Gifford: “Human rights activist & anti-ISIS campaigner. I fought in Raqqa with the MFS (Syriac Military Council) & served for 3years in the SDF. MSc Security & Diplomacy”

“Fighting Evil: The Ordinary Man who went to War Against ISIS”