Home > Talking Kurdistan > The Struggle for Kobanê – A Future for Kurds? 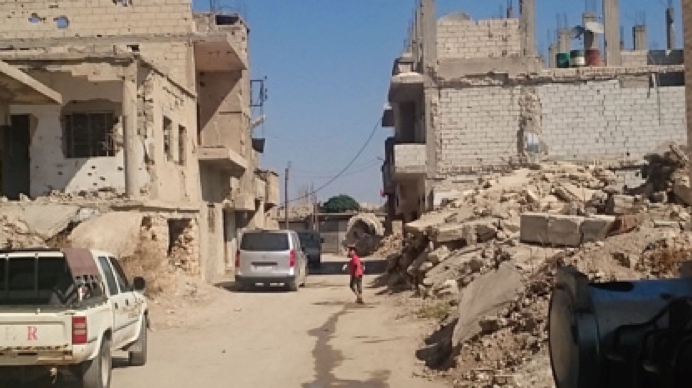 This week in September marks the 6th (since September 2014) anniversary of the Islamic State/Daesh’s advance on and siege of the Kurdish city of Kobanê/Ayn al-Arab…at the height of their bloody (“bloodshed, beheadings, destruction”) expansion. It also marks the turning point in their fortunes in the Middle East and the beginning of the end of their geographical rule.

It may also highlight, hopefully, the ongoing work of bringing the world’s attention to the plight of the Kurds, the largest group of people (estimated at over 40 million) currently without a state of their own, spread among a number of hostile authoritarian regimes in the region known historically as Kurdistan and now witnessing a period of profound instability which could lead to positive change or more cruelty and genocide – as the last century has taught us so bitterly.

Let us hope it is the first option.

Likewise it has brought attention, sparse and often-critical though it may be, to the fact that, in a land cursed with too many outrages, a democratic and libertarian revolution, (likened to the popular uprisings in Spain in 1936 at the start of the Civil War) is and has been ongoing since 2012 despite all attempts to crush it.

From 2 July 2014 until January 2015 an almost hopeless struggle on behalf of the defenders of Kobanê was fought. By 27 January, with Turkey eventually allowing support to cross its border to the besieged city and supported by US-led coalition airstrikes on ISIS/Daesh’s positions – (“The US’ initial reluctance to launch airstrikes to help the Kurdish city was believed be caused by its unwillingness to upset Turkey, who preferred a Kurdish defeat. Wikipedia) – as well as additional Kurdish fighters, the jihadist forces were finally defeated marking the beginning of the end of the Islamist ‘caliphate’.

Some months later, in June 2015, the killers returned, detonating a car bomb and attacking and slaughtering civilians from a number of directions.  “According to medical sources and Kobanê residents, 120 civilians were executed by IS in their homes or killed by the group’s rockets or snipers,” said Rami Abdel Rahman, who heads the UK-based Observatory. He said women and children were among the bodies found inside houses and on the streets of the town, which is close to the border with Turkey.” (BBC, 26th June, 2015)

The final casualties of the brief killing spree were estimated to be 164 dead and 200 injured.

In his October 2017 interview for Global Rights, Ednan Osman Hesen, the librarian (and author of “The spark from the Kobanê resistance” / Çirûskek Ji berxWe-dana Kobanê) from Kobanê  talked of losing his family during this time:

“During this time, Rodi (Ednan’s brother) returned to Kobanê and married his lover Perwin Hemo whom he had loved for 7 years. They were not even married 20 days when a massacre occurred on 25th of June 2015 and the 20-day-old bride and groom Rodi and Perwin were martyred in this massacre.

My mother was martyred.

My sister Gulistan Hesen was martyred.

and their six children were orphaned.

My uncle Mistefa Hemo, two of my cousins Osman and Ehmed

and their mother Gule Evdi.

but they were able to hide themselves.

They witnessed how their mother, sisters and brothers

were slaughtered by barbarians.

After this last incident I returned from Amed and buried my family members.”

In this painful interview we get a close up of what the abandoned people of Syria have been experiencing all these years and what the Kurdish people in NE Syria are experiencing at the moment and one of the many reasons for their ongoing struggle.

After more than a century of betrayal and right up to Donald Trump’s recent and cynical sell-out sanctioning the neo-Ottoman warlords of Turkey to begin another endless conflict in the region, both the persistence of the Kurds in their demands for rights, respect and autonomy as well as their recent sacrifices in defeating the so-called ‘Islamic State’…

…surely the time has long passed for the Kurds to be recognised internationally and supported in their efforts in preserving their culture and freedom and in contributing to the stability and peace of this region?

For far too long we have watched, helplessly, the cynical abuse of power by even more cynical and ambitious dictators, generals, politicians, their regimes and their victims, whether they be Armenians at the close of the Ottoman empire, Bosnians in Srebrenica, the Muslim Rohingya people… right down to the current outrages that Turkey is allowed perpetrate against the Kurds and other ethnic minorities in what is left of its once extensive empire. And all this in homage to a world shaped by the grim mechanics of power and business-as-usual where to dominate is the order of the day despite all the rhetoric we hear of human rights and democracy.

The silence experienced by the Kurds facing their own share of this human tragedy is now hopefully beginning to come to an end.

There exists now many different movements and organisations that give shape to a variety of Kurdish initiatives towards autonomy and freedom.  This struggle for and in Kobanê, and in the Autonomous Administration of North and East Syria (NES/Rojava) along with the eventual success in the fight against ISIS/Daesh has now transformed into one that has managed to catch the world’s attention…

…not least for its innovative solutions to the problems of (that is, the lack of) democracy in the region, its placing of much-needed gender-equality (Jineology) at the centre of the struggle and its equally important and courageous statement that a people cannot live in subjection to an inhuman doctrine or ideology but instead provide the example we need to believe that the ongoing struggle for a human, and a humane, world is possible.

“In  1937  the  Basque  city  of  Guernica  suffered  a  criminal  bombing  by  the  Nazi-Francoist  forces.  In  the  middle  of  the  destroyed  city  stood,  symbolically,  a  leafy  oak  tree,  symbol  of  the  liberty of the Basque people. Guernica was reborn from its ashes and the oak  tree of Basque freedom is still in its place. Kobanê is the Guernica of the Kurds, and its citizens  are  committed  to  remember  their  martyrs,  to  sow  life  in  the  midst  of  countless  material  and human losses.” (Kobanê: landscapes after the battle)

As to the future…

“For  so  many  years  our  existence  has  been denied and we have had to live under colonialism. if we have now proved ourselves  to  the  world  in  the  military  field,  we  can  also  prove  it  in  literature, in art and in politics.” Ednan Osman Hesen

…lest they be forgotten.

Kobanê: landscapes after the battle