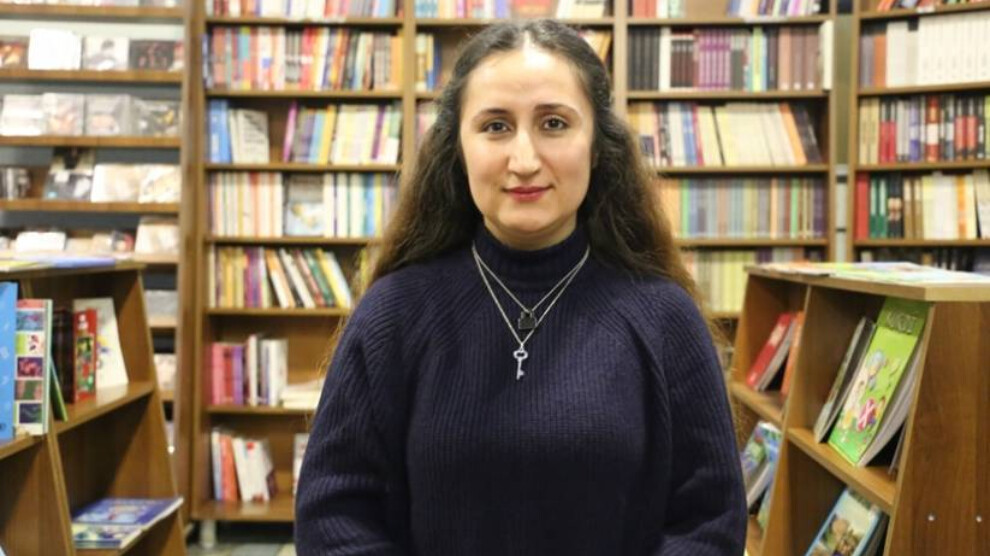 Jinnews Kurdish service editor and writer Roza Metina was taken into custody on Friday morning during a raid on her home.

Writer Roza Metina, who was detained within the scope of the Democratic Society Congress (DTK) investigation conducted by the Diyarbakır Chief Public Prosecutor’s Office, was taken to the Provincial Police Department.

We publish here an interview with Metina made by Mina Ro.

The winner of the fourth edition of the Deniz Fırat Short Story and Poetry Award, organized by the Free Students Union this year, were delivered at a ceremony at Maxmur camp.

Author and journalist Roza Metina was awarded the first prize in the Kurdish Story category.

In an interview with ANF, Metina said she was very happy with the award, and added that Kurdish women are the characters of her stories with their sorrows and joys.

“Deniz Fırat Award – she said – is special and meaningful for me. I’ve put the pain we suffered into my writing. I believe that if we get the pain and joy that we live across to the people in the right way, then the people will empathise”.

What does it mean to you to be awarded the Deniz Fırat Short Story Award?

Have you written before and how did you decide to join this award competition?

My writing started with poetry. When I came to Amed and started university, I began to take Kurdish lessons and to improve my language. I began to write in Kurdish while reading Kurdish writers. I wrote my first short story for children. I then wrote Cemile’s story and then participated at the Rojava’s Short Story Competition with a story on Mother Taybet. This year I have been working on the story of the Sultan Irmak who was massacred in one of the Cizre basements.

Why do you prefer to tell stories about women, especially Kurds?

I could not hold my tears when I came to the last sentence of the story of Mother Taybet. I was so sad, I kept thinking about her. For weeks, her body was left on the street. The struggles of women, especially in this system, are very much alive. Despite everything. I write about the women. I prefer writing about Kurdish women because they have a self-defense force, in particular a fighting future. My future stories will also be about women.

Roboski, Sur, Cizre, Halabja, so many events and massacres experienced by Kurds on the way to freedom. What is the role of a writer for you, being a woman writer? Is writing important in this struggle?

We need to write, paint, make films, and tell of our pains and joys with our pen, camera, songs. We must voice what is happening. It is a responsibility to express and write about these events in the context of national consciousness.

We have to write, it is our duty to write in order for people not to forget.

Why did I write about Mother Taybet, or Cemile, or Sultan? Because they can’t be forgotten, they are part of a national memory and consciousness.

I could write about other topics. But we Kurds cannot even love a flower freely. I lived these pains and put them down in writing.

I believe the stories I tell will affect readers when they read them. I want to tell the stories of women, their fight, which goes together with the national fight.

You are both a journalist and a writer. In Turkey Kurdish journalists and writers are systematically under attack. What does it mean to you to have this identity and how did you synthesize your journalism and your writing?

You have to have the ability to write in order to do journalism. I believed journalism and fiction writing are interconnected and intertwined. I wrote fiction before doing journalism, and when I started reporting, I noticed that my writing [fiction] reflected into my news. If you are a journalist, you want to write continuously and produce the most accurate facts. You are trying to reveal the reality of the people.

In my short stories the work is more complicated than in my journalism. But I do get inspiration from journalism.