Peace in Kurdistan Campaign has just published an open letter to Britain’s Secretary of State for Foreign and Commonwealth Affairs, the Rt. Hon. Dominic Raab MP, on the recent sentencing of  Leyla Güven 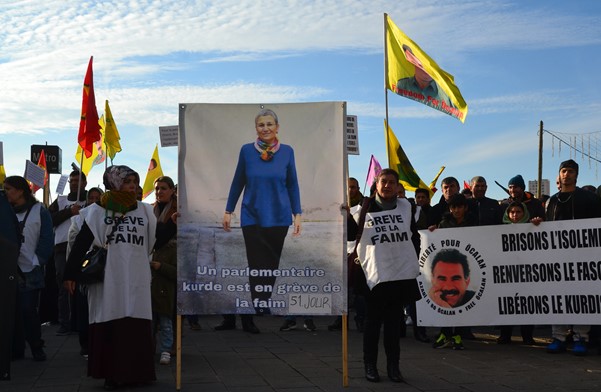 Peace in Kurdistan Campaign has just published an open letter to Britain’s Secretary of State for Foreign and Commonwealth Affairs, the Rt. Hon. Dominic Raab MP, on the recent sentencing of  Leyla Güven.

The HDP Deputy was sentenced to 22 years and three months in prison on Monday 21 December – Turkey’s ruling AKP regime’s Christmas present to the Kurds in Turkey and the diaspora.

In November 2018 Leyla Güven initiated a hunger strike to protest at the isolation of jailed Kurdistan Workers Party (PKK) leader Abdullah Öcalan. The protest spread widely and was joined by at least 7,000 prisoners in pressurising the right-wing regime of Turkish President and Chairman of the ruling Justice and Development Party, Recep Tayyip Erdoğan to grant limited access to his lawyers for the first time in nearly nine years.

The 18 different charges against her add up to the now customary Turkish ‘judicial process’ of “rounding up the usual suspects” along with preventing all political opposition to the authoritarian regime, i.e. managing an illegal organisation, being a member of an illegal organisation, provoking the public to join illegal meetings and demonstrations, unarmed participation in illegal marches, not disbanding illegal marches when ordered to do so, along with the customary “making propaganda for a terrorist organisation”…etc.etc….

Along with this new outrage against an elected member of the Kurdish community in Turkey, and with an enormous silence coming from Turkey’s neighbours and business partners, whether in Europe or the U.S., an estimated  16,000 HDP-opposition activists have been detained since 2015 in Turkey, with 6,000 of them jailed, along with 200 elected officials and seven MPs, including the party’s former co- Selahattin Demirtas and Figen Yuksekdag, while more than 50 elected mayors of the 65 municipalities won by the People’s Democratic Party in last year’s local elections have been dismissed and replaced by government-appointed “trustees.”

Another year coming to its end; another year where the dreams and aspirations of ordinary people, along with their most basic rights, once again find themselves buried in the nightmare of war and poverty, repression and a contempt for justice and democracy by those with wealth and power, whose days are ‘certain’ to be numbered by the ongoing struggles of people like Deputy Güven…

Hey, President Recep Tayyip Erdoğan, do you not know its Christmas time?

We are writing to you to express our grave concern over the jailing of former Peoples’ Democratic Party (HDP) MP Leyla Guven who was sentenced to 22 years and three months in prison by a Turkish court on Monday 21 December.

She was charged with a number of offences including the management of a terrorist organisation relating to her role as the co-chair of the Democratic Society Congress (DTK) – a coalition of Kurdish organisations supporting autonomy and Kurdish rights.

The DTK is not a terrorist organisation. The Turkish government at one stage agreed, inviting the organisation to take part in talks aimed at developing a new and updated constitution for the country.

In a separate hearing on Tuesday December 22nd, the European Court of Human Rights stated that the DTK was a legal organisation and ruled that participating in activities organised by the DTK cannot be considered as evidence of membership of a terrorist organisation, calling for Ms Guven to be released immediately.

It is not the first time the Kurdish politician has been targeted by the Turkish state. Ms Guven was stripped of her parliamentary status in June and briefly jailed before a successful campaign for her release. In 2018 she was jailed after a speech opposing Turkey’s invasion of Afrin, in northern Syria. Ms Guven was subsequently elected as the MP for Hakkari from her prison cell.

The decision to jail her for more than 22 years is effectively a life sentence. If the decision is allowed to stand, Ms Guven, who has dedicated her life to the cause of freedom, peace and justice, will spend longer in prison than rapists, murderers or Islamist terrorists.

There is no longer an independent judiciary in Turkey. Following a controversial constitutional referendum in 2017, all appointments are now made by President Recep Tayyip Erdogan. The country’s courtrooms are accused of carrying out political decisions based on Mr Erdogan’s demands.

The HDP, Turkey’s fourth largest political party, has come under intense pressure since it was founded. More than 16,000 HDP members and supporters have been arrested since 2015. Of those 6,000 have been jailed, including 200 elected officials and 7 parliamentarians.

More than 50 democratically elected HDP mayors have been removed since last year’s local elections and replaced with government appointed trustees. In recent months hundreds of HDP members and representatives have been detained in police operations.

This is the biggest attack on a legal political party since the end of the second world war and has been described by the HDP as a political genocide.

We urge you to use your influence with Turkey, a NATO ally and member of the Council of Europe, to secure the immediate release of Ms Guven and to raise your deep concerns over the ongoing clampdown on democracy.

Turkey must be reminded of its obligations to abide by international law and the decisions of institutions including the European Court of Human Rights. Britain must ensure that basic and fundamental rights are upheld by Turkey and consider what course of action to take if it fails to do so.

We look forward to your swift response to this urgent matter and to securing the immediate release of Ms Guven.

Peace in Kurdistan on behalf of Patrons: