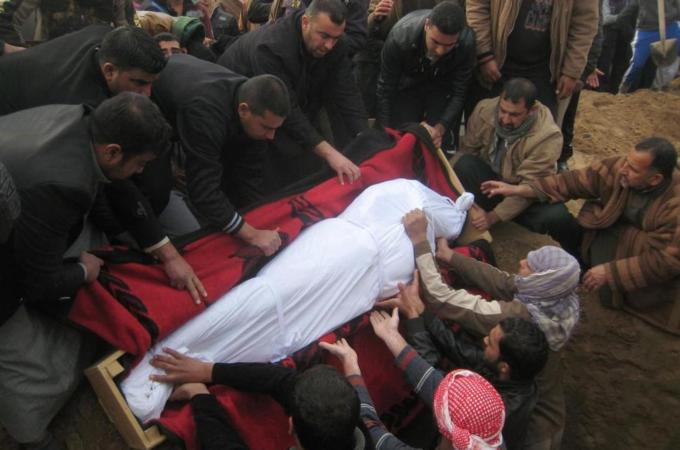 The Iraqi government’s war on terror will not diminish the suffering of the Iraqi population, writes the author [AP]

Violence is spiraling out of control in Iraq, as the regime dodges responsibility.

During his visit to Iraq on January 14, United Nations Secretary-General Ban Ki-moon voiced concern  about the deteriorating security  situation. In his joint press conference with Prime Minister Nuri al-Maliki, Ki-moon urged all political leaders to “address the root causes of the problems”, calling for “political cohesion” and “political dialogue, inclusive dialogue”.

Ban Ki-moon was immediately rebuffed by al-Maliki, who said: “Talk about dialogue in Al-Anbar is rejected because we do not hold dialogue with al-Qaeda”. He seemed to be saying there is no one in the province worth talking to. In doing so, al-Maliki resorted to his usual rhetoric accusing Anbar’s population of being ‘terrorists’, despite the fact that protesters, along with five other provinces, have been peacefully demonstrating since December 2012. His statements were obviously intended to legitimise a sectarian-inspired brutal military campaign against the protestors.

The question is: Will the siege, bombardment and military onslaught on Fallujah and Ramadi in Anbar province , put an end to the terrorist acts and  frequent car explosions taking place in markets, cafes and mosques and in various Iraqi cities? Will the highly publicised US-Iraqi franchised “war on terror” in Anbar put an end to the endemic suffering of Iraqis?

Hardly so. Explosions continue unabated in many cities, even with the launch of Maliki’s military assault on Falluja and Anbar. And despite the countless official statements of arresting and killing scores of “al-Qaida emirs” (leaders), as well as members of the Islamic State of Iraq and Syria (ISIS). In Arabic, the ISIS has an acronym that reads as Daaish, which sounds comical, and in Baghdadi dialect is close to “Dagash” that translates to “phoney”.

What Maliki chooses to ignore and what Ban Ki-moon has singled out is precisely what the protest movement has been demanding all along: looking at the root causes of the problems. In Iraq’s case, they are sectarianism, corruption, lack of basic services, violations of human rights, increasing unemployment and organised gangs and militias flourishing under a kleptocratic government.

The Maliki government has been harvesting over $100bn a year for some time now, from the nation’s oil wealth.That amounts to about $20,000 a year per average Iraqi household of 7 people, except that Iraqis are left deprived of basic commodities. The wealth is squandered or stolen, a situation illustrated by Transparency International as: “Massive embezzlement, procurement scams, money laundering, oil smuggling and widespread bureaucratic bribery have led the country to the bottom of international corruption rankings, fuelled political violence and hampered effective state building and service delivery.”

Terrorism thrives through official corruption, since any officer has a price for letting go of a car or a convict. The officers themselves pay to get their positions, and they have to cover the costs for acquiring them. The Maliki regime blames all terrorist acts on al-Qaeda, and recently on Daaish. Iraqis, however, suspect an abundance of diverse actors according to where and when a terrorist act is committed, including the regime itself, its security officers who strive to increase their funding  and its officials who resort to covering up tracks, burning documents and eliminating rivals.

Al-Maliki also selectively chooses not to mention the regime’s own militias: Asaib Ahl al-Haq, Iraqi Hezbollah, the Badr brigades, factions of the Mahdi army and the Mokhtar army. The latter’s leader has bragged on Baghdadiya TV, about their responsibility for several attacks. No investigation has been done and no one was arrested. There is also hardly any mention of the Iraqi Special Forces inherited from the occupation, especially trained by Colonel James Steele under US ambassador John Negroponte and attached now directly to al-Maliki’s office.

Above all, there is no mention of the plethora of foreign-led special operation agents, private security contractors, and organised networks of professional killers, some of whom, many Iraqis believe, are protected by the regime, in the shadow of the US’ biggest embassy in the world, in the fortified green zone in Baghdad. Added to this list is Iran and its using of  Iraq as a battle ground to settle scores with the US, or making their presence felt in the ongoing bargaining about its regional role.

Al-Maliki’s political alliance, originally designed by the US-led occupation and carried on by the same players despite the fallacy of an electoral process, proved to be a complete failure leading the country from one disaster to another. A political process based on a sectarian-ethnic quota is the Frankenstein created and nurtured by the US and the UK to divide and conquer by positioning themselves to be the indispensible arbitrator. But like all rootless monsters, and oppressive subservient rulers navigating between masters, it has grown beyond the control of its creator planting the seeds of fragmentation and animosity.

The squabbling of the politicians, calling themselves partners in al-watan (homeland), has developed, in some cases, into a full-blown bloody clashes, such as when security forces raided the home of MP Ahmed al-Alwani in Ramadi, which led to the killing of his brother and five guards.

Under current Iraqi law, 48 offenses are subject to the death penalty. Men as well as women are executed in an unprecedented rate. Just in 2013, 169 people were executed, the highest such figure since the 2003 US-led invasion, placing it third in the world, behind China and Iran. Iraq’s justice system is “too deeply flawed to warrant even a limited use of the death penalty, let alone dozens of executions at a time,” the United Nations human rights chief Navi Pillay said, warning that the death penalty undermines efforts to reduce violence and achieve a more stable society. Torture, sexual abuse and the threat of rape and actual rape are frequently inflicted on detainees, regardless of their gender.

Adding to its crimes against Iraqi people, the US continues to deliver to al-Maliki’s regime weapons and equipment, abetting its militarisation and uncontrollable violence against civilians.

The Iraqis themselves believe that no future without full political and economic sovereignty, equal citizenship and respect of human rights. Otherwise the madness of revenge will continue to prevail.

* Haifa Zangana is an Iraqi novelist, artist and activist. Among her books are Dreaming of Baghdad and City of Widows: An Iraqi woman’s account of war and resistance. She co-authored The Torturer in the Mirror with Ramsey Clark and Thomas Ehrlich Reifer.

The views expressed in this article are the author’s own and do not necessarily reflect Al Jazeera’s editorial policy.