So the choices of François Hollande and the government of Manuel Valls, in the aftermath of the massacre by Daesh in the streets of Paris, not only appear as an emotional reaction: they are rather a step in the construction of the state of exception 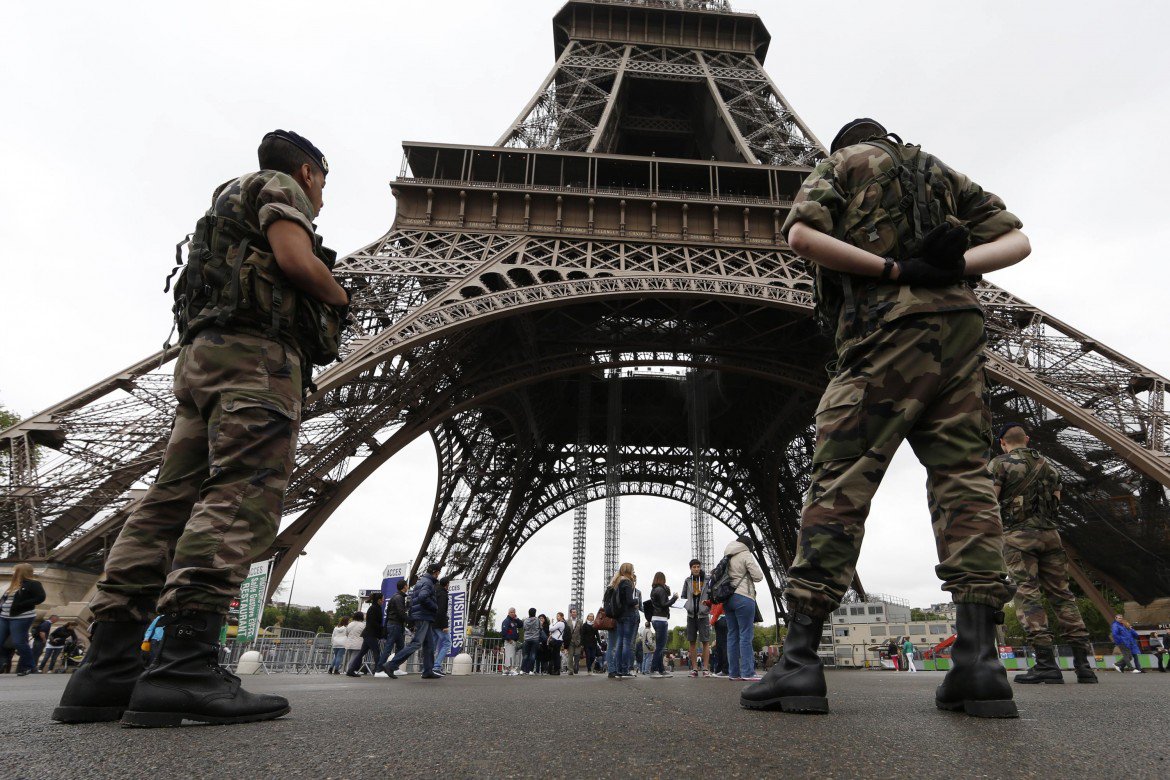 A global war is taking place. It’s not new, but today it is more obvious to everyone. Perhaps thanks also to Pope Bergoglio, who introduced in the public reflection his idea of a “Third World War” under way, albeit “fragmented”.
After the attacks in Paris on November 13, this war seems finally to shake the world and public opinion, showing at least part – a small part – of its effects. But its causes continue to be concealed or not investigated, causes whose exact understanding is a must for the possible and necessary solutions. Causes that can not be reduced to one, being a mixture of ingredients variously distributed and mixed in the various “fragments” of this world conflict. War is given definitions often partial and always misleading: war of civilization, religion war, ethnic groups war, supremacy war, all these to hide the neo-colonial root of deep inequalities. As noted by the French economist Thomas Piketty, the area stretching from Egypt to Iran, via Syria, Iraq and the Arabian Peninsula, with a total of about 300 million inhabitants, sees 60-70 % of regional GDP concentrated in the oil monarchies, which have only 10% of the population. Monarchies which, not by chance, had a maieutic function of the Islamic State.

The dirty appetites of the “military-industrial complex”
It’s necessary, however, be read and understand the relationships that make the “fragments” the full picture, only apparently uneven. The black thread that binds them consists primarily in the economic interests of the arms and oil industries and of the financial ground on which they root, whose appetites do not stop in front of any moral scruples. And not just recently. This is, mutatis mutandis, the same accumulation of power exposed for the first time by US President Dwight D. Eisenhower in his farewell speech of January 17, 1961: “In the councils of government, we must guard against the acquisition of influences that do not give guarantees, both obvious and hidden, carried out by the military-industrial complex. The potential for the disastrous rise of powers that override their headquarters and their prerogatives now exists and will persist in the future. We must never let the weight of this combination of powers endanger our liberties or democratic processes. We should not assume that rights are taken for granted. Only a nation of citizens alert and conscious can exercise proper balance between the huge industrial and military machinery of defense and our peaceful methods and long-term goals so that both security and liberty may prosper together. ”
Prophetic words in terms of description, much less as far as the auspices went. Over time it seems to be no compromise was reached to safeguard, at least in significant part, liberties and “peaceful methods”. In the new century, indeed, the alliance between big business and the overall interests of war and energy has completely discredited the political function and democratic governments, mostly reduced to ratifiers of decisions taken by others and elsewhere; and suffice it be to remember about the enormous influence that has, for example, the National Rifle Association on the elections, even the presidential, in the United States.

The default of democracy
So the choices of François Hollande and the government of Manuel Valls, in the aftermath of the massacre by Daesh in the streets of Paris, not only appear as an emotional reaction: they are rather a step in the construction of the state of exception, a strong acceleration of the compression of freedom of dissent, criticism and protest, through a Patriot Act declined to French and thanks to constitutional amendments promptly introduced in the direction of a post-democracy; they are a cynical political manipulation, an attempt to erode space and votes to the National Front of Marine Le Pen, competing on the same slippery ground soaked by the poison of xenophobia; they are together and first of all, an operation aiding, even more cynical, the already flourishing arms market, ready even to break the constraints of the European Stability Pact in order to divert substantial public resources to the merchants of death, the military and the industry of the so-called security. Opening the way to other countries, Italy first.
Thus the religion of austerity, which until yesterday had seemed indisputable and was imposed in the strongest terms not only to battered Greece but to most countries of the Union,  aiming to compress wages and workers’ rights, privatize common goods and dismantle the welfare systems, today is seriously flawed, with the consent of EU governance, for the supreme interests of the business of war. So that the people are to go from impoverishment and inequality, to war and terrorism, while the “military-industrial complex”, now fully transnationalized and financialized, rubs its happily greedy and bloody hands.
That retaliation and military spiral, with the intensification of the bombing French together with those of the international coalition, have indeed the hidden effect of feeding the production of weapons, more than really hit the Islamic State (figures show this clearly: the 8418 air raids carried out by the coalition to 22 November 2015 in Iraq and Syria against Daesh have caused the death of about twenty thousand Islamic fighters (and about two thousand civilians: as to say an average of only 2-3 jihadists killed in each mission and bombing). Figures clearly ludicrous (from the military point of view, not from the human, of course), that little justify the massive means used and the high economic costs. The war, just as the finance in time of neoliberal globalization, drains resources from the bottom up, from the public to the private.
The roots of the global war
This as far as the outcomes are concerned. But to understand, you should always go back to the origins.
The attacks in Paris have opened a crack, painful and suddenly, in the removal veil of indifference and numbness which prevents EU citizens and Westerners to know and get angry for thousands and thousands of similar incidents that take place daily in the Middle East and Africa and that form of terrorism morally accepted by Western (in)sensibility represented by the drone war and the indiscriminate bombing causing mostly civilian casualties.
The massacre in Paris, and then the attacks in Mali, are just the latest, predictable stage of a permanent phase of belligerence that has one of its main roots in the wars wanted by George W. Bush.
The destabilization of Iraq has, indeed, created the conditions for the growth of Daesh, built thanks to the support, weapons and funding of the Gulf monarchies, Saudi Arabia in the lead, with the active consent of the United States and with the liabilities of ‘Europe. Saudi Arabia is the fourth country in the world for military spending: over 80 billion dollars spent in 2014, after the United States (610 billion), China (216) and Russia (84.5) out of a total global totals 1776 billion.
The Western military intervention in Iraq, and the subsequent conflict, have so far produced, according to Iraq Body Count, 224,000 deaths, two-thirds of them civilians; in the month of October 2015,  714 were killed people, including 559 civilians.
The Siamese twins and Pandora’s Box
The spiral war-terrorism-war reproduces itself endlessly and is proving wrong precisely the strategy of “endless war” theorized by Bush, his Vice President 303 and his administration, to the benefit of their own economic interests, linked to the oil sector and the war.
It is easy to predict that if the arms industry and the lobbies dependent on it, will continue to dictate the policy choices in the world, terrorism is expected to grow more and more bloody even in the streets of the West, whose governments bear obvious responsibility for this situation. War and terrorism, in fact, are Siamese twins, which feed each other in everything and only benefit warlords.
The promoters and profiteers of war were cursed by the Pope, which is acknowledged to be one of the few dissonant voices in the world right now. We can’t, however, forget the responsibility the Vatican had in the process of dissolution of the former Yugoslavia, at least in its origin, with the unilateral separation of that Slovenia now committed to emulate Viktor Orban in the construction of walls and barbed wire fences against the refugees.
With the war in the Balkans in the early nineties of the last century, in fact, it was uncovered a Pandora’s Box of ethnic hatred and destabilizing strategy of the post-Berlin Wall.
The Third World War, fragmented yet in place, is the terrible monster escaped from that Box. A monster that can be stopped and rendered powerless just from the bottom, by a recovery in global movements for peace, climate justice, coexistence and social justice.