Home > Magazine > Cultures > For The Kurdish People in Diyakabir and Beyond

For The Kurdish People in Diyakabir and Beyond 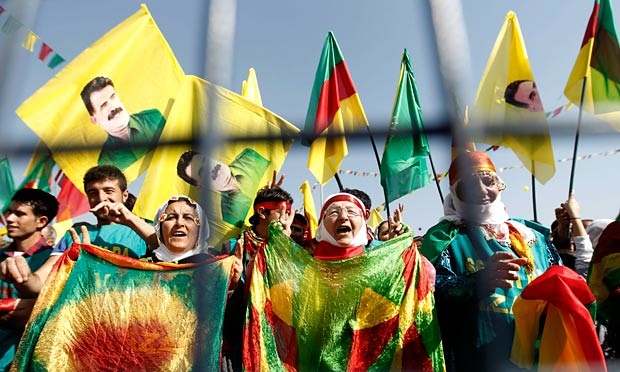 For The Kurdish People in Diyakabir and Beyond[1]

i’m sitting in a crater in a bombed out mind,

i sit here waiting for the noise to stop

waiting for these silenced shouts and screams

to waken this fucked-up world from the dead.

i’m sitting in a crater

and someone’s just cut my arms off,

cut my legs off

left the rest floating in space in a crater

in a bombed out basement in my mind.

but i want to go home, these childlike voices say

there’s a queue to get out of here,

someone turns the sound down on the TV,

this noise these tanks and guns,

these Turkish soldiers in Diyarbakir

but still there’s the queue

this waiting listof the dead:[2]

shot by the police,

EXECUTED BY THE POLICE WITH EXTREME PREJUDICE.

But maybe, maybe its the children,  the 73 dead children

‘executed by the police with extreme prejudice’

or artillery fire or bomb or armoured car

shot  from an armoured car

also shot from an armoured car

(was it the same car, the same killers, one day,

one week, one lifetime later?)

11 years old, fell AND DIED while chased by the police,

dead and still dead, despite all curfews all courts all the

lawyers and the arguments,

while those with power talk, the poor people still die,

all 283 voices waiting now to enter

waiting onwhat comes after the silence

waiting entry here to our bombed out crater of a mind,

where else is there to flee this madness now?

Maybe it’s the kids they kill sends me into this heartbroken rage?

Either way,  not one of us are ever going home.

You neither, Mr. President.

[1] From the article by radical journalist OrsolaCasagrande in Global Rights, 29 January 2016: https://www.globalrights.info/2016/01/hundreds-of-civilians-have-died-in-turkey-since-july-2015/

[2] From July to January, the names of 283 dead Kurds: https://www.globalrights.info/wp-content/uploads/LIST-OF-CIVIL-CASUALTIES-DURING-THE-TURKISH-STATES-OPERATIONS-1.pdf