I first met Gerry Adams in the autumn of 1977 at a meeting about political prisoners in the Ballymurphy Tenants Association. A man of the highest integrity 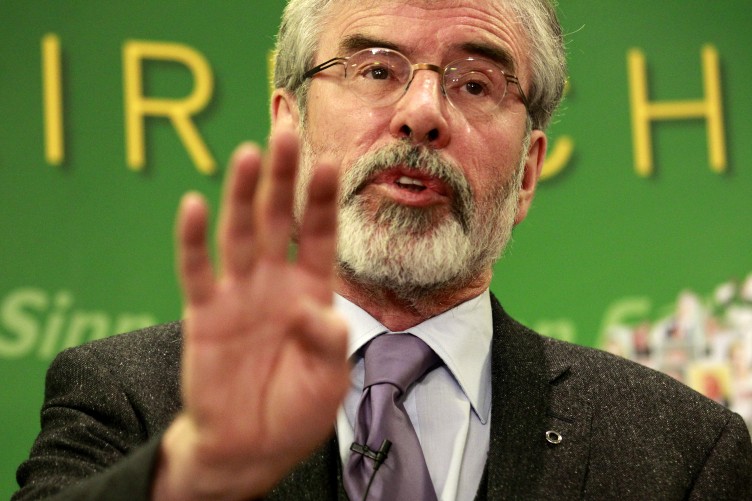 It was shortly after 10pm when the polls closed last Friday in the  south’s general election that I received a text message from Gerry  Adams, in response to a text I sent him wishing him good luck: “Well, we  have 2 in Louth. And we will do well nearly everywhere”, he said.

I was instantly gripped with excitement and anxiety at such a confident  prediction from such a cautious person on such occasions.

I thought were it to come true what a personal tribute for Gerry and  what a slap on the face for the naysayers in the political establishment  and media who try to denigrate him and thereby the tens of thousands of  people who vote Sinn Fein.

I looked at my brother Damien. We were at his daughter Sinead’s 30th  birthday party. He is a former Sinn Fein councillor in Lisburn. He is in  regular pain from a serious neck injury he received when a mob of  loyalists attacked him and his colleague, Pat Rice, as they attended a  council meeting representing their constituents. Back then loyalists  were killing Sinn Fein councillors and their families.

In an interview standing alongside Imelda Munster, who was elected with  him, Gerry Adams said the people of West Belfast elected him and so had  the people of Louth. And I thought – and they did it with such style:

I first met Gerry Adams in the autumn of 1977 at a meeting about  political prisoners in the Ballymurphy Tenants Association. A man of the  highest integrity, he sat in a crowded room of relatives, mainly women –  all working-class, unassuming, listening, quietly advising.

A sage for all seasons and situations. He now shapes this nation’s  politics for people just like those we met in Ballymurphy.

On polling day last Friday I was in the Felon’s Club in West Belfast in  the company of over 200 relatives of IRA volunteers who died fighting  the British Crown forces. They were going to Dublin to an event to mark  the 1916 Rising to honour those who died one hundred years ago, just  like their sons and daughters, in the noble cause of Irish independence.

People were keen to talk about Sinn Fein’s prospects at the polls. The  nation’s capital would be voting while it played host to a group of very  proud people.

As the votes were being counted a key Sinn Fein objective was emerging  in the next Dail: the realignment of politics on a left/right axis and a  growing Sinn Fein presence led by Gerry Adams.

As this unfolded I passed through Gerry Adams’ former constituency, now  in the hands of the irrepressible MP Paul Maskey, an area with one of  the largest number of Sinn Fein voters in Ireland.

It is home to many republican martyrs some whose lives touched me: Bobby  Sands MP for Fermanagh/ South Tyrone, Kieran Doherty TD for  Cavan/Monaghan, Joe McDonnell, Brendan O’Callaghan, an IRA volunteer  shot dead by the British Army, Miriam Daly, my mentor, shot in her home  by loyalists.

Miriam often spoke about her father’s association with Michael Collins  during the War of Independence. With her I met Nora Connolly O’Brien,  James Connolly’s daughter and Maire Comerford. From Miriam I learned so  much about the importance of the politics of the nation and how close we  are through others to iconic figures from the past.

I thought of Sarah Holland from the Glen Road, Belfast. Now a Sinn Fein  councillor and mayor of south Dublin she stood unsuccessfully for the  party in the southern election. For decades the Holland family have  provided distinguished political and civic leadership to the republican  cause.

James Connolly wrote that partition would cause a ‘carnival of  reaction’. It did that and more. The two states isolated republicans,  and apartheid, unionist-style, excluded nationalists from power in the  north while the southern state abandoned them.

With Martin McGuinness as deputy first minister in the north that  exclusion has ended. With Gerry Adams leading a significantly larger  group of Sinn Fein TDs in the Dail the north will, in this centenary  year of the 1916 Rising, never again be abandoned.