The Cizre Report. The situation in Turkey at the moment does not bode well for an investigation into these crimes against humanity 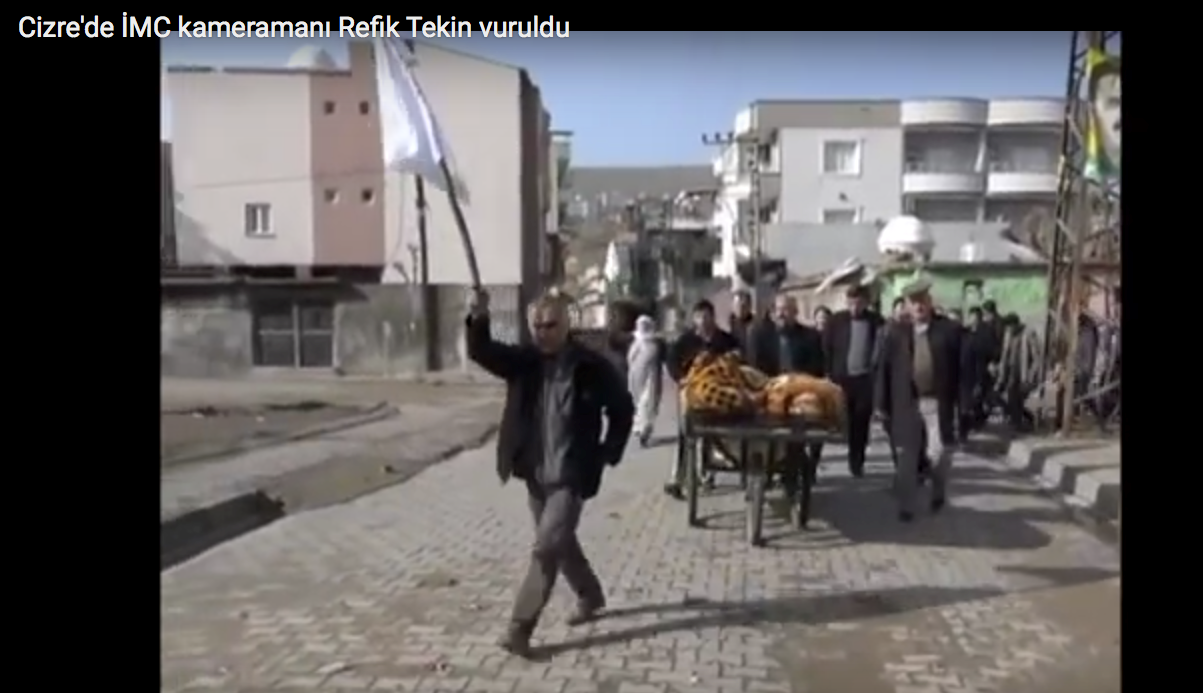 “You will see the strength of the Turks.”

(Turkish soldiers…as they beat wounded cameraman Refik Tekin, in Cizre during the military Curfew, December 14, 2015 to March 2, 2016  – Interview to HRW.)

July 12 2016: following the recent Statement in May from UN High Commissioner for Human Rights, Zeid Ra’ad Al Hussein in response to:

“alarming reports about violations allegedly committed by Turkish military and security forces in south-east Turkey over the past few months” and urging “the Turkish authorities to give independent investigators, including UN staff, unimpeded access to the area to verify the veracity of such reports”…

Human Rights Watch, (HRW) the International non-governmental human rights organisation,  issued its criticism of Turkey for its refusal to allow international rights organisations HRW, Amnesty International and Physicians for Human Rights, enter Northern Kurdistan to investigate claims of gross violations of human rights by the Turkish  military in this region since the ending of the peace talks between President Recep Tayyip Erdo?an’s government and the Kurdish Liberation movement, the PKK.

HRW points out that since July 2015 military operations are ongoing in urban areas resulting in a significant loss of human life as well as impact on the civilian population. Unlike in the past, where conflicts in the region predominantly took place in rural areas, the violence now has also resulted in the displacement of an estimated 355,000 civilians from most of the major towns in the south including Diyarbakir, Cizre, ?dil, ??rnak, Nusaybin, and Yüksekova.

In March 2016, the Peoples’ Democratic Party (HDP) sent a delegation to Cizre following the ending of the military curfew there. Their interviews are recorded in the Cizre Report….

In March and April this year, a Human Rights Watch researcher visited Cizre and spoke to “witnesses to human rights abuses, victims, their families, municipality workers, members of the local municipal council, lawyers from the ??rnak bar association, and civil society groups. ”

In April the HRW researcher was intercepted by officers from the Anti-Terror Branch of the Turkish police “who informed her that permission from the district governor was needed to conduct visits to families in Cizre.”

Part of the strategy of the Turkish security apparatus in laying siege to these Kurdish towns is obviously to prevent or limit any witness to its operations. This in itself is considered a violation of fundamental rights:

“On June 13, the Council of Europe’s Venice Commission issued an opinion on the legal framework governing curfews. The opinion found that ‘the Provincial Administration Law, on which decisions imposing curfews were based, and the decisions themselves, do not meet the requirements of legality enshrined in the Constitution and resulting from Turkey’s international obligations in the area of fundamental rights, in particular under the ECHR and relevant case-law.’ The Commission recommended that the Turkish authorities end the imposition of curfews on the basis of the Provincial Administration Law.”

This denial of access now following the curfews is an obvious development of a similar strategy to avoid any criticism of its actions and its increasingly apparent human rights violations still ongoing in the region.

The Financial Times on March 31st this year defined this strategy by President Erdo?an as one of extermination:

“Yet the confidence he displays in the face of the reignited war with Kurdish insurgents in south-east Turkey, and its tangled strands across the southern border amid the mayhem of Syria and Iraq, seems misplaced. After ending a once-hopeful reconciliation process he initiated to end the 30-year insurgency of the Kurdistan Workers party (PKK), he now frequently pledges to exterminate it.”

Thus the potential for escalation and further civilian deaths and displacement is increasing and becoming more evident as the military operations continue unchecked.

Physicians for Human Rights were prevented from entering into Cizre in May 2016.

In June, Amnesty International researchers were prevented from visiting the area.

The ‘Basements of Horror’

The Human Rights Watch statement also refers to the mounting international concern around the civilians trapped in three basements in the Cudi and Sur neighborhoods of Cizre earlier in the year and subsequently murdered by the military.

The HDP in its report following its investigations in March this year had said:

“These basements where citizens took refuge, and which exemplified the merciless behavior of the state towards the injured have been named “basements of horror” and became a part of the national agenda on January 23, 2016.”

“The available information also indicates that security forces surrounded three buildings and deliberately and unjustifiably killed about 130 people – among whom were unarmed civilians and injured combatants – trapped in the basements:

The picture of what happened after the alleged killings is also incomplete. Municipal workers told Human Rights Watch that they transported the bodies to the morgue in body bags after the military and police ordered them to collect the bodies from streets near the buildings where the three basements were located.
The municipal workers also said some of the bodies were burned, in some cases so charred as to be unrecognizable, and that others were missing limbs and heads. An imam who saw some of the bodies gave a similar account. Human Rights Watch also saw eight of the autopsy reports on the recovered bodies, which indicated that six bodies lacked body parts and four were burned. The autopsy reports note that such findings could be consistent with an explosion though did not explain why some were partially “carbonized”, and in three cases determined people had been shot dead.”

Faysal Sar?y?ld?z, a HDP Member of  parliament member when interviewed:

“The bodies of all of those (25 people) in the first basement were burned. In the second basement, which came to light a few days later, there were around 62 people and in the third basement about 40 people. Again we knew many of them and there were civilians and badly injured people there too. It was all over in early February and they were all killed. I call them the basements of barbarity.”

Human Rights Watch points our that Turkey has been found wanting on  more than one occasion of violating basic human rights protocols it has signed up to. They go on to say:

“Turkey’s history of failing to carry out effective investigations into killings in the southeast, in particular in cases in which state agents were alleged to have been responsible for unlawful killings, resulted in a series of rulings by the European Court of Human Rights that Turkey violated the right to life.”

The Statement also includes some heartbreaking and graphic details from interviews with residents and victims of the military operation.

The killing of a 3 month old baby, Miray ?nce, shot twice by sniper fire followed by the shooting dead of her 82-year-old grandfather, Ramazan ?nce, who was bringing her to an ambulance and was carrying a white flag is probably one of the more shocking of the interviews conducted by HRW in the time they were able to do their work:

“Even when the police told you things were safe, the security forces kept on shooting.” Ramazan ?nce’s son, Abdurrahman ?nce, said, as the family had been given permission, by the police, to bring the injured infant to the ambulance.

…Or the killing of: Yusuf Akal?n, 13, and his cousin Bü?ra Yürü, 11, by mortar fire in the Da?kap? neighborhood which also seriously injured Yusuf’s 10 year old sister Dilan Akal?n:

“The children were playing downstairs behind the front door with my aunt’s two sheep. We had made a place for them under the stairs in the entrance to the building. We were in the sitting room upstairs. We heard three explosions and rushed downstairs to see the children covered in blood, their feet blown off.” (Halil Yürü, 22, Bü?ra’s brother…)

The situation in Turkey at the moment does not bode well for an investigation into these crimes against humanity. As well as the other measures President Erdo?an has recently engaged in, he has also expressly criticised Turkish human rights organisations for attempting to investigated allegations of abuses from the south east region.

Many have called for Turkey’s international partners to urgently express support to the request for access made by the UN High Commissioner for Human Rights, Human Right Watch said.

On January 7, two brothers, Halil and Nihat Sömer, were fatally shot from the direction of the ?ahin Hill (Cizre State hospital, where the Military had established a  base for their actions.) ?lhan Sömer, 30, another brother, who visited the hospital to find his brothers stated that police officers beat him at the hospital where his brothers had just died:

“ They took me to a room and one said, “Kill him, let him be the third…I feel there is no law here that the state regards us all as terrorists. If there was law here this wouldn’t have happened,” ?lhan Sömer said…

Read May 10, Statement: Need for Transparency, investigations, in light of “alarming” reports of major violations in south-east Turkey

EUROPEAN COMMISSION FOR DEMOCRACY THROUGH LAW

Watch: Footage of Turkish Sniper Fire on civilians seeking the wounded and dead in Cizre, and carrying white flags (including Faysal Sar?y?ld?z, the ??rnak member of parliament from the Peoples’ Democratic Party (HDP), and cameraman (shot on camera) Refik Tekin – 2 people were killed in this shooting. When interviewed  by HRW Telkin said: “I really do not know what would have happened if those ambulances had not shown up. I think they might have killed us all right there and then.”