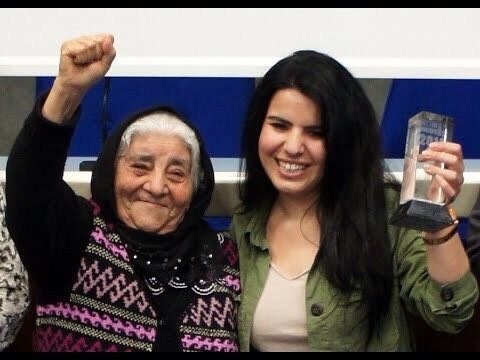 «In this country, dark as night, where all of our rights have been scratched out with the red of blood, I already knew that I would be imprisoned. I want to repeat Picasso’s teaching: do you really think that a painter is just someone who uses her brush to paint bugs and flowers? No artist turns her back on society; a painter needs to use her paintbrush as a weapon against oppressors.»

At 15.00 hours (GMT) the women’s news agency Jinha released a statement via Facebook:

«The closed JINHA Women’s News Agency’s editor Zehra Doğan, who was in jail since 29 July 2016, has been released at the first hearing today.»

On July 24th Jinha had said:

«JINHA, MÊRDÎN – Our editor Zehra Doğan had been imprisoned for her work as a journalist based on the testimony of witnesses whose identity has been kept confidential. Zehra, who had been reporting for months from the blockaded district of Nusaybin, is being charged with ‘membership in an illegal organization.'»

Turkey, I think, must be running out of cells, basements and free spaces in the nation’s many prisons and dungeons with the amount of arrests that have taken place since the July coup. However that doesn’t seem to deter the Turkish Authorities nor President Recep Tayyip Erdoğan from targeting more writers, journalists and out-spoken Kurds. I remember reading a long time ago that during the Argentinian military junta (1976-1983) one of the generals had told a journalist: «…we have dealt with the activists, we have dealt with the trade unionists, we have dealt with the students. Those that do not actively support the regime will be next.» Luckily there was an expiry date on the generals’ military rule with their secret detention centres, torturers and endless lists of the disappeared (los desaparecidos). One wonders what is the expiry date for Turkey’s current dilemma, recently veering sharply to the right and far down the path of open contempt for any form of democracy or any respect for human rights, norms or values?

In the meantime the likes of Asli Erdogan and now Zehra Doğan face prosecution ostensibly on the grounds of being a member of an illegal organisation…the proof being their outspoken support for human rights and in particular the freedom of expression.

The attempted coup began on July 15, 2016 and was more or less over by the next day, July 16, as people gathered in the major squares of Istanbul and Ankara to show their opposition to the military’s attempt to seize power. The purges began shortly afterwards with the New York Times reporting on 16 July:

«Mr. Erdoğan moved rapidly on Saturday to round up his adversaries, real or imagined. Authorities reportedly had detained nearly 3,000 members of the armed forces, including a brigadier general, and purged the judiciary of 2,745 judges.»

But, as we know now, he did not stop there.

The attempted coup d’état was considered a ripe opportunity to deal with all opponents as well as the ‘breakdown’ of the Kurdish-Turkish peace process in July 2015. The decision then of Erdoğan’s government to wipe out Kurdish opposition was now presented with an excuse to wipe the slate clean in ‘Turkish Kurdistan’, with anyone who might be perceived as a threat to the new ‘status quo’ being targeted.

‘“We will continue our fight until weapons are laid down… and not one single terrorist remains within our borders,” Erdoğan said in a televised speech in Ankara.

He said the weapons of the PKK and other militant groups must be buried “under concrete” to show they were no longer a threat to the Turkish state.

“I’m not talking about laying down arms, I’m talking about burying them. I’d like to emphasise this,” Erdoğan said.»‘ The Oman Daily Observer reported in August 2015.

At the time of her detention Jinha reported:

«In her defense, Zehra testified that she is a journalist and that all crimes she stood accused of were journalistic activities. She noted that she is a member of the Union of Journalists of Turkey and officially seen as a journalist by Turkey’s social security system. In response to the charges of working with journalist Bilal Güldem, Zehra reminded the court that Bilal himself had been imprisoned based on similar testimony and ultimately released. She said that the statements in the testimony could not be construed as a crime. She testified that she did not recognize any of the witnesses, that they could only have identified her based on photographs provided, and that she therefore did not accept the charges.»

Apparently at the court hearing, the prosecution had presented a number of witnesses to testify against Doğan without one of them being able to state her name. One anonymous witness claimed “There was… a short lady with a nose ring… I do not know the individual’s identity; she is probably a journalist.” The prosecution also used Doğan’s paintings and social media posts as evidence against her.

“Art and paintings can never be used in such a way,” Doğan’s lawyer, Asli Pasinli, is recorded as  saying. “This is an attack on art and artistic expression.”

From the Letter to the High Representative for Foreign Affairs and Security Policy/Vice-President of the European Commission:

«Dogan’s news and   paintings are used as “Evidence  of  membership to PKK” by   the judiciary, which makes her case unique in the history of Turkey. She’s the only painter in prison that is accused of terrorism because of her paintings.»

Doğan  herself issued a  statement in a letter to Jinha from her cell on the day of her detention:

«I always tried to exist through my paintings, my news, and my struggle as a woman. Now, although I’m trapped between four walls, I still think that I have absolutely done my duty in full. In this country, dark as night, where all of our rights have been scratched out with the red of blood, I already knew that I would be imprisoned. I want to repeat Picasso’s teaching: do you really think that a painter is just someone who uses her brush to paint bugs and flowers? No artist turns her back on society; a painter needs to use her paintbrush as a weapon against oppressors. Not even the Nazi soldiers tried Picasso because of his paintings, and yet I am on trial because of my drawings. I will continue to draw. When a woman takes up that riot of colors, she can make a prison out of brushstrokes. But they’re just brushstrokes…. Don’t forget, it’s my hand that holds the paintbrush!”

Zehra Doğan is from Diyarbakır (Amed) in Northern Kurdistan. She has lived in and reported for Jinha from Nusaybin near the Syrian border since February this year. The Turkish government declared a curfew in Nusaybin on Sunday 13th March. She continued to work under the Turkish military curfew in the border town for the next 5 months.

“Like other journalists in the region, I narrowly escaped death in many situations. I was targeted by snipers once, my home was shelled and raked by automatic weapons on the others. I received many threats and insults on social media. And in the end I was arrested…”   says   Zehra   Doğan,   in   a   letter   she   wrote   from   her   prison   to the European Parliament..

She was held in the E Type Closed Prison in Mardin, in the southeast. She has won the Metin Goktepe Journalism Award for the integrity of her journalism under difficult circumstances. Her paintings are exhibited in both Turkey and France. On the conditions in the overcrowded prison she was held in, she had this to say:

“Apart from the arbitrary naked searches in the police office, I experienced verbal harassments and heavy insults by the police and special forces. I was asked these questions non-stop: ‘Why are you practicing journalism? What is your purpose in painting? Are you getting orders from PKK?’”

She had been held in a ‘ward’ which was home to 30 people, more than its capacity. After 2 months there, there were more than 45 people in Doğan’s ‘ward’ and the   population continued to increase every week. Because of the over crowded conditions, the prisoners were forced to keep their doors and windows open in order to get oxygen, which made  the  prison  cold,  especially  with winter setting in…

Zehra Doğan (in her letter to the  to the European Parliament):

“I remembered the famous quote of Pablo Picasso when the police asked me if I made the painting that depicts the destroyed city center of Nusaybin: A Nazi-officer asked him if he had made the painting of Guernica and Picasso replied ‘No, you did’. Even   the Nazi regime didn’t imprison Picasso, but the Erdoğan regime imprisoned me…I tried to stop the guns that are pointing at my people, with my painting brush and   pen. As I’m regarded as a ‘terrorist’ by the regime, they must be regarding brushes and pens as weapons. It was the same President Erdoğan who defined the book of Ahmet Sik as ‘more dangerous than a bomb’ during his speech in 2011 at the Council of Europe while defending their imprisonment. I may be imprisoned now but don’t forget that I still have my brush and my pen!» 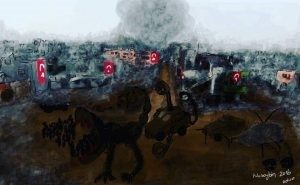 Following her appearance in court on the 8th December it is now reported that she has been released: ‘Örgüt propagandası’ gerekçesiyle tutuklanan JİNHA editörü Zehra Doğan tahliye edildi’: «JINHA editor Zehra Doğan, who was arrested on the grounds of ‘propaganda for the organization’, was released…» While we continue to wait to see the outcome of the Turkish State’s war against its perceived enemies… «The court dismissed Doğan releasing her on condition of judicial control», news media in Turkey reported…. Doğan’s next appearance in Court is reported to be scheduled for 23 February 2017. The online DIKEN newspaper was told by Doğan’s lawyers just prior to her court appearance, that she had recently been taken from detention to attend the hospital and on seeing the outside world after a number of months she is reported to have said:

«Çok şaşırdım, dünya en son gördüğümden daha kötü» yorumunu yaptığını ilettiler – I am very surprised, this world is worse now than the last one I saw.»

Still: «No artist turns her back on society; a painter needs to use her paintbrush as a weapon against oppressors.»

copy of painting  from letter: To the attention of: High Representative for Foreign Affairs and Security Policy/Vice-President of the European Commission, Mrs Federica Mogherini…at: http://www.kedistan.net/wp-content/uploads/2016/10/Letter-to-Mogherini_Free-Zehra-Dogan.pdf

Letter to the European Commission:

An «investigative journalist, author of several books, and a trade unionist. His book The Imam’s Army, investigating the controversial Gülen movement of the Islamic preacher Fethullah Gülen…»