Home > Magazine > Cultures > ON A DAY THIS WEEK > Sakine, Fidan and Leyla

//
Orsola Casagrande
/
ON A DAY THIS WEEK, Talking Peace, Uncategorised 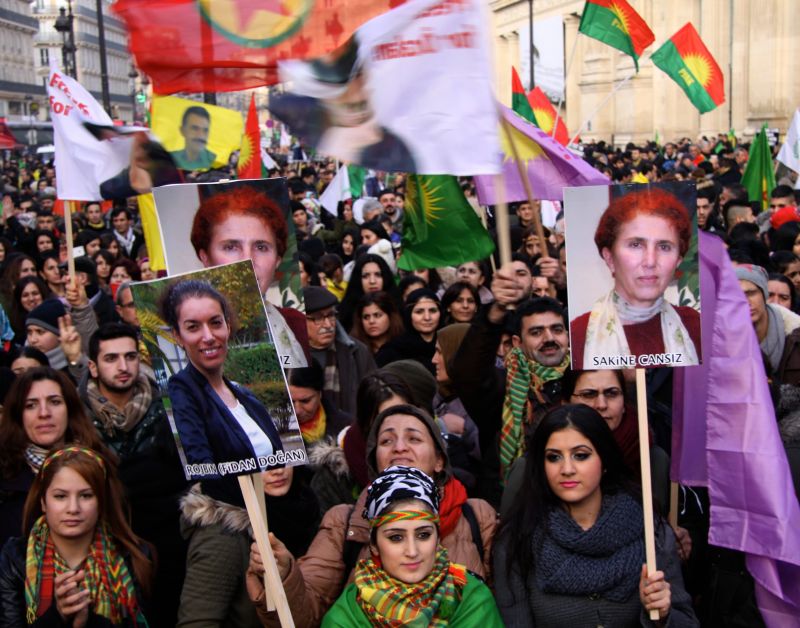 She was born in Dersim, She was Kurdish and Alevi. She defended both her identities which were forbidden by the Turkish Republic regardless of her position. Therefore, she joined the PKK, she participated in the foundation congress of the PKK in 1978. Since 9 January she was one of the living PKK founders and also she was the first member of the Kurdish Women‘s Army which had thousands of soldiers.
She took part in organisational activity for the PKK in Elazig and Bingol. She was arrested during the 12 September Coup. She expressed her defiance against Commander Esat Okay who was responsible for torturing prisoners while she was in Diyarbakir Prison where she stayed many years. The action made her legendary and also she was the first one to make a political defence in court in the Kurdish Freedom Struggle’s History. After finishing a 12 years prison sentence, she carried out the fight in various fields and she remained always a leader in Kurdish history.
In 1995 she participated in the first Kurdish Woman Congress in order to create opportunities for Kurdish women to become organized. She was experienced in the creation of the Kurdish Women Army. In her thirty years of struggle, she was a partisan commander, woman‘s right advocate, a teacher in Maxnur refugee camp, a governor of the PKK, tutor in the academy, diplomat who attempted to bring the Kurdish Freedom Struggle to international attention. However, everybody regarded her as their comrade. She was the inspiration for Kurdish people and Women Freedom Fighters in particular.

Fidan Dogan (Rojbin):17 January 1982- 9 January 2013
Fidan’s (Rojbin) family is Kurdish and Alevi from Maras where a huge massacre occurred. Fidan moved to France with her family when she was 9 years old. Her father stated that she learned French in six months.
She joined in Kurdish Freedom Struggle in reaction to Kurdish National Leader Abdullah Ocalan’s
hijacking and kidnapping to Turkey. She used her French language skills for her nation’s freedom fight. She worked hard to raise awareness of Kurdish issues among the international community. You could see her trying to get signatures from members of Parlament or interviewing a priest to help activists who could not find a place for a hunger strike. It was possible to see her arranging international conferences or setting up in South America. Also you could see her doing interpretation for Kurdish MPs who came from Turkey.
Who knows maybe you actually knew her better than us! If her cruel killing had not happened she would have participated in the historic Amed Newroz and she would have gone to her village where she left when she was child. However, all her wishes have been fulfilled by the millons of Kurdish people. Her coffin was taken to Amed with a large entourage of people turning up to the ceremony and afterwards she was buried in her birthplace of Hancipak village in Elbistan/Maras.

Leyla Saylemez (Ronahi): 1 January 1989 – 9 January 2013
Her family was deported from their homeland before she was born. She was born in Mersin miles away from her family’s homeland. Her family is from Lice/Amed. When Lice was burned down by Turkish soldiers Leyla was only small baby. Se had experienced deportation when she was 10 years old. She continued her education in Halle Salle in Germany where she moved with her parents and six siblings. She acquired knowledge about her country’s painful history from her father and she showed a great interest in the future of her country. She became involved in many cultural activities at the Kurdish Institute. Before she was murdered she was actively participating in work among the youth.