the Mardin 2nd High Criminal Court has sentenced Zehra Doğan to 2 years, 9 months and 22 days imprisonment for the painting 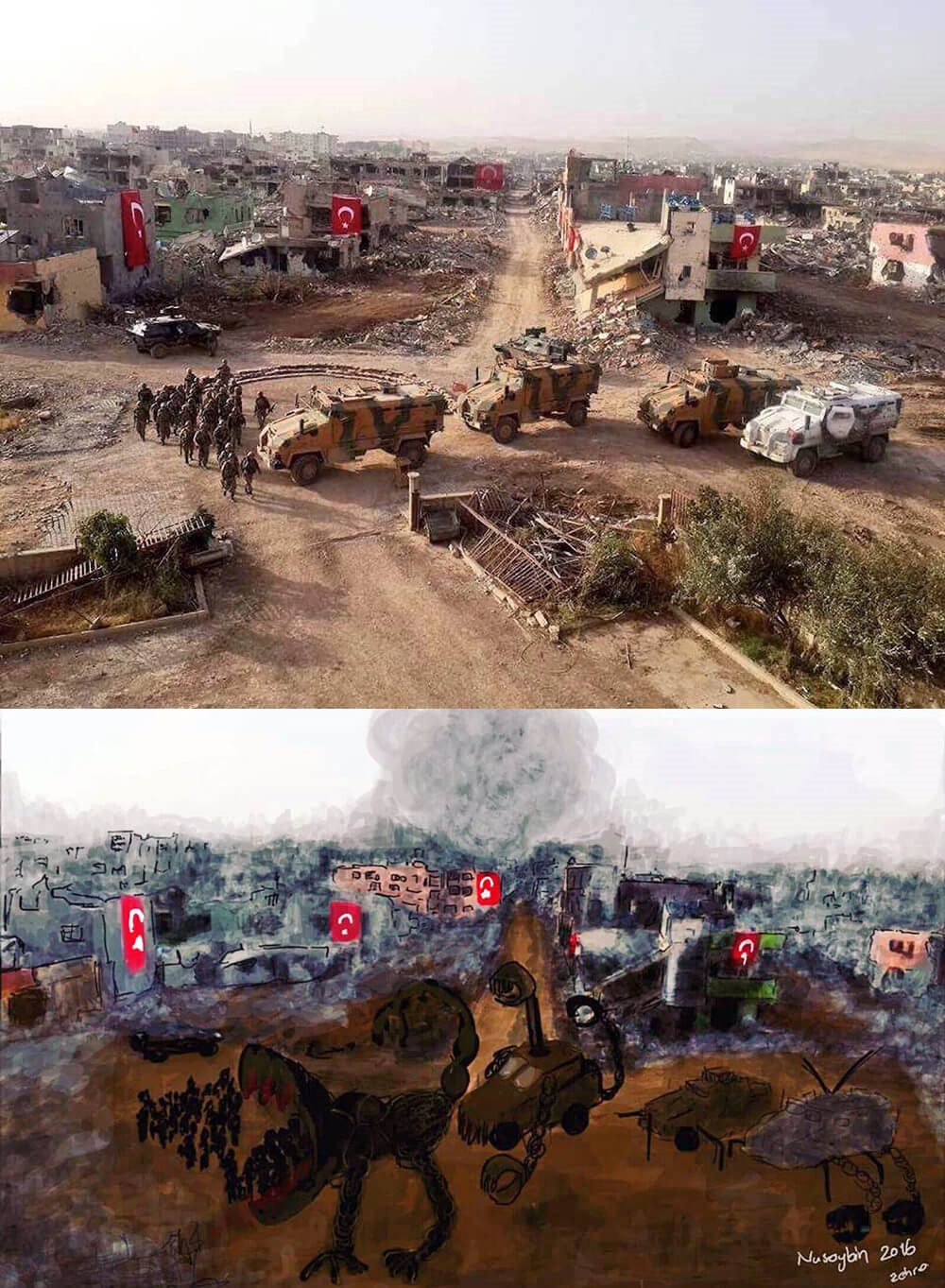 “…they [the Turkish government] caused this. I only painted it.”

The pictures above, the one on top an actual photograph of what was left of the Kurdish city of Nusaybin after the Turkish military assault in 2016, part of their ongoing war on the PKK (Kurdistan Workers Party) which has drawn strong criticism internationally for its many violations of the human rights of the citizens in southeastern Turkey (Northern Kurdistan), since the collapse of the Kurdish-Turkish peace talks (Solution Process) in July 2015. The picture below that: is a painting by  Zehra Doğan , artist and journalist, of the same scene.

Now the Mardin 2nd High Criminal Court has sentenced Zehra Doğan to 2 years, 9 months and 22 days imprisonment for the painting (as well as her use of social media). And, it seems in particular, on the grounds that she drew Turkish flags on the buildings portrayed. She was acquitted of the charge of membership of an illegal organization. Lawyer Şiraz Baran said Zehra had been in Nusaybin as a journalist and continued: “Painting a demolished city doesn’t mean making propaganda for an organization. It is certain that my client is not a member of an organization.” (The Şûjin Gazette)

You could almost laugh at the idiocy of this and so many other decisions taken by the Turkish state of Recep Tayyip Erdoğan since the failed coup, only for the suffering that has been, and continues to be, inflicted on the citizens of this god-forsaken part of the globe that no one – with the exception perhaps, “of the mountains”, now seems able to protect.

Zehra Doğan is a Kurdish artist and journalist originally from Diyarbakir (Amed), ‘capital’ of Northern Kurdistan, in the south east of Turkey. She also served as an editor for Jinha, the Kurdish feminist news agency reporting news in the Kurdish language with a staff consisting entirely of women. In this capacity she lived in Nusaybin near the Syrian border since February 2016. The Turkish government declared another curfew in Nusaybin on Sunday 13th March. Over the next number of months there were eight successive curfews imposed and much of the city was destroyed by the military. She continued to work under the Turkish military curfew in the border town during these months, saying: “Like other journalists in the region, I narrowly escaped death in many situations. I was targeted by snipers once, my home was shelled and raked by automatic weapons on the others. I received many threats and insults on social media. And in the end I was arrested…” in   a   letter   she   wrote to the European Parliament.

Her trial that began on March 2, 2017 is the end process of her original arrest. Zehra Doğan was sitting at a cafe on July 21 2016 when approached by police and arrested – on the grounds of spreading propaganda for a terrorist organization.  She was then accused of “being a member of a terrorist organization”. Following her appearance in court on the 8th December 2016 she was released temporarily: “The court dismissed Doğan releasing her on condition of judicial control”, news media in Turkey reported….” At that time Global Rights, along with other independent media, carried the news that Doğan’s next appearance in Court was reported to be scheduled for 23 February 2017. At the same time The Voice Project (a “non-profit advocacy group focused on promoting freedom of artistic expression as an agent of social change” founded in Uganda in 2009) began a campaign to Free Zehra Doğan…

Returning to trial on March 2, 2017, she was acquitted of the charge of membership of an illegal organization, but the prosecution’s lawyers used Doğan’s paintings and social media posts as evidence against her. She testified that all the crimes she is accused of are journalistic activities, for which she is registered with the state and a member of the Union of Journalists of Turkey. Despite this she has been sentenced to 2 years, 9 months and 22 days. She has appealed the sentence.

The painting (above) is of the wilful destruction of the Kurdish town of Nusaybin, based on a photo taken by Turkish state officials. “I was given two years and 10 months [jail time] only because I painted Turkish flags on destroyed buildings. However, they [Turkish government] caused this. I only painted it,” Doğan said via Twitter after she was sentenced. In a statement for Fairpress, Doğan also said: “[The judge has] punished the wrong actor: Not the one who destroyed the town, […] not the one who shot the photo, but the one who painted the photo. They made this painting, not me.”

Zehra Doğan: “I was penalized because of ridiculous reasons that are hard to believe. For a painting in which I depicted the destruction in the town of Nusaybin. The judge gave me a prison sentence and said: “By painting the Turkish flag on the destroyed walls of Nusaybin, the propaganda of the (terrorist) organisation was made”. I was also penalized because of a news story I wrote about a 10-year-old child in Nusaybin. Although I published a video showing what the child was saying, I was penalized as if I was the one saying what the child had said. It wasn’t me that shot the photo, they did, and it was distributed by the government media. But I was penalized for painting that photograph. With this penalty, in essence they accepted that shooting victory photos by hanging Turkish flags on the walls of the destroyed houses is inhumane and must be punished. But they punished the wrong actor: Not the one who destroyed the town, not the one who posed, not the one who shot the photo but the one who painted the photo. They made this painting, not me.  But today I’m the one who’s penalized. My penalty will most probably be approved by the higher court in one month and I’ll be taken to prison. But in the future, they’ll be the ones who are going to be condemned. I’ll try to expose and condemn this decision, which is taking away my freedom of speech…”

Friday, 24th March: Amnesty International has called on the Turkish government to stop its crackdown on the media and release imprisoned journalists in the country.

“Turkey now jails more journalists than any other country. One third of all imprisoned journalists in the world are being held in Turkish prisons, the vast majority waiting to be brought to trial. Journalists and media workers from all strands of opposition media have been targeted in an unprecedented crackdown since the violent coup attempt in July 2016. Coupled with the closure of more than 160 media outlets, the message is clear and disturbing: the space for dissent is ever-shrinking and speaking out comes at an immeasurable cost…”

Turkish Minute (a new web portal presenting news on Turkey in English “amid ever-increasing pressure on the critical and independent media in the country”)  carried a recent meeting of Turkish President Recep Tayyip Erdoğan with muhtars [neighborhood heads] at the presidential palace in Ankara, March 22 where he said:

“I say, ‘Give me the list of jailed journalists.’ I look at the list and see that all of them are thieves, child abusers or terrorists. Recently, a 149-person list [of jailed journalists] arrived. When you look at the crimes they committed, they include bringing bomb components from northern Iraq to Turkey; another one’s crime was to carry out an armed attack on a police vehicle. Another one was arrested with explosives. There are many from bank robbers to those setting election offices on fire among them. While 144 of them were jailed on terror charges, four of them were jailed for committing petty crimes.”

“This crackdown must end. Act now to demand media freedom in Turkey. Journalists and other media workers must be freed from pre-trial detention. A free media is an essential component of any functioning, pluralist society. They must be allowed to do their job, because journalism is not a crime…”

Neither is painting a picture. Nor interviewing a child. Nor being a Kurd. Nor living in a region where the old imperialist powers, England and France, divide up your county, with the result that “…Kurdistan was subjected in part to Turkish rule, the Iranian peacock throne, the Iraqi monarchy and the Syrian-French regime…Worldwide, the Kurds are the biggest nation without a state of their own. They have been settling in their present settlement areas since the Neolithic. Agriculture and stock breeding as well as their readiness to defend themselves using the geographic advantages of their mountainous homeland helped the Kurds to survive as a native people. The Kurdish national question rises from the fact that they have been denied their right to nationhood. Others tried to assimilate them, annihilate them, and in the end flatly denied their existence. … Their settlement area is divided by the national borders of four countries and lies in a geo-strategically important region, thus providing the Kurds a strategic advantage.” (Abdullah Öcalan, ‘War and Peace in Kurdistan’)

The Voice Project, in its online letter to Ahmet Davutoğlu, Prime Minister of Turkey and Kenan İpek, the Minister of Justice, says: “Expressing one’s culture through art and reporting is a fundamental right, and cannot be persecuted. It is especially alarming that this action is being taken against an award-winning journalist and painter whose voice has proven to be crucial to sharing the stories of underrepresented communities…. I strongly urge you to unconditionally release this artist.” 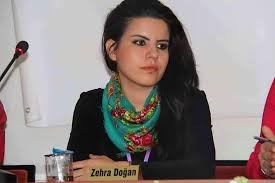 Turkish Minute: “The staff at Turkish Minute — operating under the belief that presenting independent news about Turkey is essential in the absence of critical voices at home and that if they don’t report the news in English, it simply will not be available to the outside world — contribute to this website with personal sacrifice and at great risk to themselves and their families.”