There are few more haunting memorials anywhere in the world than this group of six tall, bronze figures of emaciated men and women, and one dog, which stand on Quays 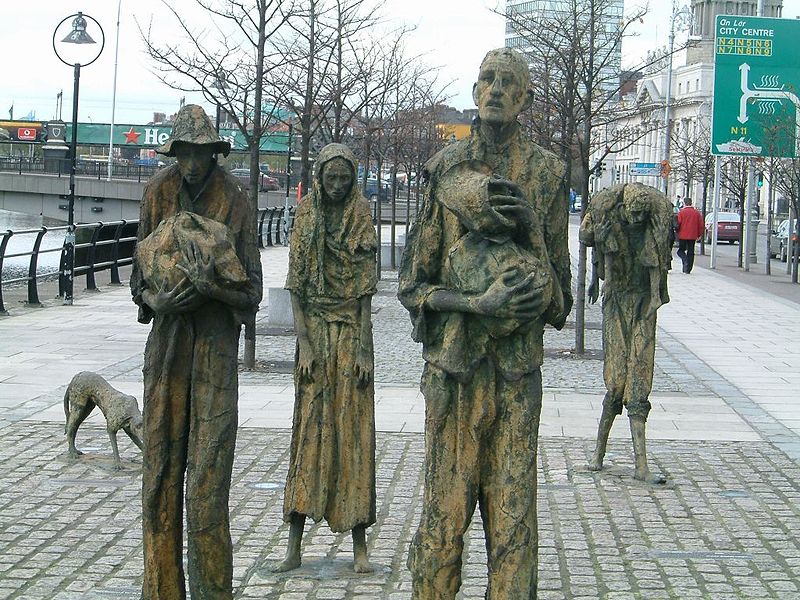 At the start of most weeks in Dublin I drive through the Port Tunnel for Leinster House. As we make our way up the Quays toward the Customs House on my left stand a group of bronze figures. There are few more haunting memorials anywhere in the world than this group of six tall, bronze figures of emaciated men and women, and one dog, which stand on Quays. They are permanently caught in the act of walking toward a ship that will take them to the USA or to Canada or England or some other far off distant shore. Their clothes are in tatters. Their faces are etched in despair and pain. The figures are a stark testimony to the dreadful human cost of An Gorta Mór – the Great Hunger – on Ireland in the middle of the 19th century.

Entitled, ‘Famine’, the sculpture was created by Rowan Gillespie and was unveiled on the 150th anniversary of An Gorta Mór in 1997. It hauntingly represents the ordeal of those who suffered through five years of hell between 1845 and 1850 as a million died in the fields, on the laneways and in the hovels and millions more fled the island of Ireland in search of food, and work, and the hope of a new life elsewhere. The bronze figures stand on the departure site of the Perseverance. In 1846 it was one of the first of the ships to leave Dublin with refugees seeking safety across the water.

A few metres beyond the figures stands the Jeanie Johnston. It is a replica famine boat – a floating museum – named after the original Jeanie Johnson which made 17 voyages across the Atlantic during the turbulent years of the great hunger. Each journey took around seven weeks in very cramped conditions for crew and passengers. According to the historical record no life was ever lost on the Jeanie Johnson – a significant achievement given the numbers who died on coffins ships and in the fever camps in Canada and the USA between 1846 and 1850.

This week An Gorta Mór will be remembered when a group of academics, dressed in period costume, follow in the footsteps of one thousand four hundred and ninety tenants forced from their homes in Roscommon in May 1847. They will pass the bronze figures on Dublin Quay and the Jeanie Johnson before finishing at the Irish Emigration Museum on the Quays. The original tenants were evicted off their land on the Strokestown estate in county Roscommon by an unscrupulous landlord Denis Mahon. They were then forced to walk over 150 kilometres to the Dublin Quays where they were put aboard four ships –Erin’s Queen, Naomi, The Virginius and The John Munn.

Unlike conditions aboard the Jeanie Johnson these ships were badly provisioned and poorly equipped for the long journey. Almost half of those who boarded in Dublin died on the journey or in the fever camp at Grosse Île outside Quebec. During those years 100,000 tenants fled to Canada. More than 20,000 died at sea or in the fever camps. Five and a half thousand alone are buried in mass graves on Grosse Île.

Many thousands more sailed to the United States of America.

The story of the great hunger is not one of famine. The potato crop failed but there was food in Ireland. The British government, its colonial administration in Dublin castle and the landlord class, chose not to implement policies that could have saved lives. The great hunger was at its core an issue of economics and politics and of powerful people in the English establishment deciding that it was cheaper and more expedient to let people starve to death or die from cholera and other diseases.

This week as the mis-named ‘National Famine Walk’ takes place from Strokestown to the Dublin Quays, the same issues of death by hunger and disease, of drowning in coffins ships, of refugees abandoned by powerful people and governments, are playing out again in countries in central Africa and the Middle East—Nigeria, Somalia, South Sudan and Yemen—and on the waters of the Mediterranean Sea.

As you read this at least twenty million men, women and children are facing immediate starvation. While drought is playing its part in the catastrophe it is widely accepted that this is largely a man-made famine, exacerbated by civil war, government policy, and the actions of groups like Al-Shabaab in Somalia who are blocking aid workers getting to communities in trouble.

In Yemen the crisis has left seven million people not knowing where their next meal is coming from. The UN humanitarian chief Stephen O’Brien told the Security Council two months ago that; “We stand at a critical point in history… we are facing the largest humanitarian crisis since the creation of the United Nations. Now, more than 20 million people across four countries face starvation and famine.

Without collective and coordinated global efforts, people will simply starve to death. Many more will suffer and die from disease.”

The New York Times recently reported that in the last month, as well as the millions facing hunger, more than 360 have died in Yemen as a result of cholera and other diseases. The military role of the government of Saudi Arabia in the conflict in Yemen has added enormously to the violence and to the plight of civilians. Despite the widespread concerns at the involvement of the Saudi government and its appalling human rights record, the British and US governments continue to sell it weapons. President Trump last week signed a military deal worth one hundred and ten billion dollars. The deal includes precision guided munitions which have been used by Saudi forces to attack hospitals, schools, and mosques.

To add to the crisis confronting these four states, and many others in the region, President Trump has initiated foreign policy cutbacks that will see the U.S.A. overseas aid budget slashed by more than 40 percent. In dollar terms this will mean a cut of one billion dollars.

When set against the one hundred and ten billion arms deal this cut to the aid budget is relatively small but its loss will leave millions of people victim to disease and hunger.

And then there are the coffin ships of this century in the Mediterranean Sea. The latest figures show that so far this year 60,521 people have crossed from North Africa to Italy. At least 1,530 refugees have died in the same period. This includes one child per day.  Last weekend the United Nations International Children’s Emergency Fund (UNICEF) urged the G7 countries meeting in Sicily to adopt a six-point action plan to keep refugee and migrant children safe, including protecting child refugees and migrants, particularly unaccompanied children, from exploitation and violence, and ending the detention of children seeking refugee status or migrating.

But objections from President Trump killed off these proposals and others by the Italian government which would have protected migrants’ rights and stressed the threat they faced from traffickers. What the G7 produced instead was a statement highlighting the right of states to secure their borders, and to set migration targets. It was an opportunity spurned.

So, if you are concerned by the issues raised in this column then help the victims as best you can. Support morally, financially, politically, those many voluntary and state organisations that are working to save lives. Oppose racism and sectarianism. And raise the plight of refugees and of those millions starving with your political leaders.