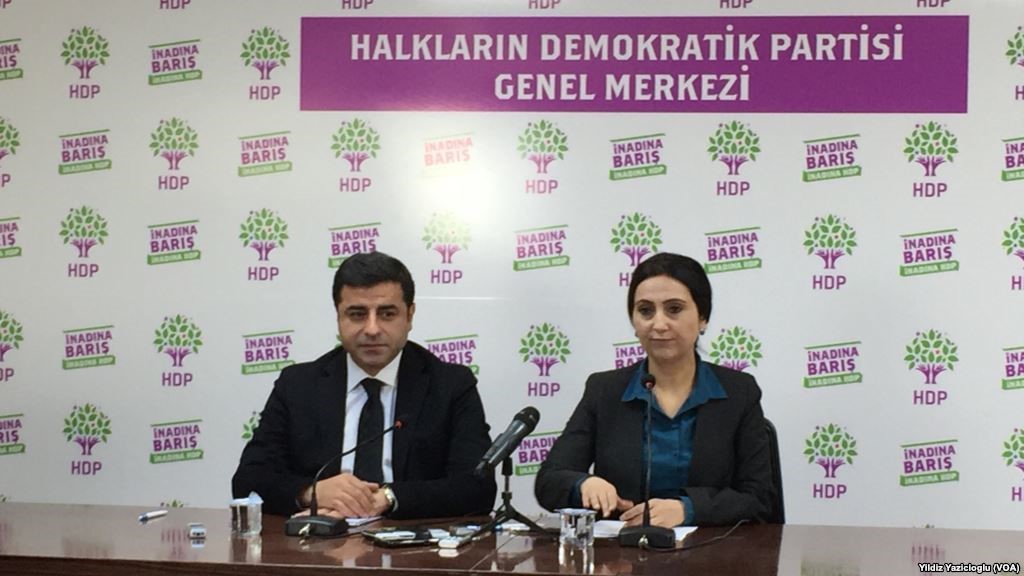 “This is very ugly propaganda. We are nobody’s extension. If we as a party were the extension of the PKK, we would not be the umbrella organization for more than 40 groups. However, the PKK is also an undeniable reality. It has a base, and so are our constituents. We cannot deny this. These people want an alternative to the PKK, they desire to participate outside the PKK and the armed struggle with a party on policy. A rational president would have seen the HDP as an opportunity. If the government wanted peace in the country, they would support us. They see us, but on the contrary, as enemies.” (Figen Yüksekdağ,  June 10, 2016)

Figen Yüksekdağ, recently replaced co-chairperson of the Turkish HDP (Peoples’ Democratic Party), whose 10 month prison sentence for “spreading terror propaganda” was approved by the Supreme Court of Appeals on September 22, 2016 costing her her seat in parliament, has now (6 June 2017) been given another 14 months in prison for a 2015 interview with German public broadcaster Deutsche Welle where she made the statement that the “PKK is a people’s liberation movement. At the same time, it is fighting for democracy and equality.” “The Ankara court ruled that those words constituted propaganda for a “terrorist” organization when giving the punishment for Yuksekdag.” (Kurdistan24.net)

Figen Yüksekdağ  was born in 1971 in Adana Province, in southern Turkey, “…the daughter of farmers, she says she’s been devoted to socialism and women’s rights since she distributed her first feminist leaflet in high school. She never went to university or had children. ‘I just would not have the time to be a mother,’ she says…’Politics is my life.'” She was editor of the Socialist Woman magazine. And arrested in 2009 for her role in the communist newspaper Atilim. In 2010, one year later, she founded the Socialist Party of the Oppressed, which merged with the HDP in 2014.

This, apparently, is the next phase of the Turkish regime’s purge of the pro-Kurdish HDP as both Figen Yüksekdağ and her co-chair Selahattin Demirtaş have been in jail since November 2016. The lawmakers began facing prosecution under anti-terrorism legislation after their parliamentary immunity was lifted in March 2016.

Prosecutors who are continuing to bring charges against the pair are seeking 83 years in total in jail for her opposition to the increasingly dictatorial rule of AKP chairman and current Turkish president, Recep Tayyip Erdoğan.

She was elected a Member of Parliament for Van in the June 2015 general election. Targeted in Erdoğan’s clampdown post coup she was arrested on November 4, 2016 along with eight HDP deputies including the other HDP co-chair, Selahattin Demirtaş on charges of supporting terrorism and Abdullah Öcalan, imprisoned leader of the banned Kurdistan Workers Party (PKK), after she participated in a rally in February 2015 protesting Öcalan’s imprisonment.

“Yüksekdağ is ethnically Turk, not Kurdish — and that doesn’t sit well with some. Kurdish political analyst and writer Bariş Yildirim, for instance, accuses her of failing to “really understand the Kurdish issue” and not being hard-left enough. Yüksekdağ, for her part, insists that “the Kurdish issue is something that should concern all Turks.” (Huffington Post, June 1, 2015)

Her parliamentary membership was revoked by the courts on 21 February 2017. The decision on the revocation of her parliamentary membership came after the Supreme Court of Appeals approved a lower court decision finding her guilty of making “terror propaganda” (she was accused of chanting slogans that incited violence) on November 27, 2013. In 2013 Yüksekdağ was sentenced to 10 months for participating in the funeral ceremony of Yasemin Çiftçi, a member of the Marxist-Leninist Communist Party (MLKP). Her party membership and therefore her co-leadership position were revoked by the courts on 9 March 2017. Turkey’s pro-Kurdish HDP was then forced to choose Serpil Kemalbay as the party’s new co-leader in her place.

In the ongoing saga of the repression of Turkey’s Kurdish population that has recently escalated as Turkish president Erdoğan seeks to consolidate his power and remove all opposition,  the Firat News Agency counted 9 HDP deputies and 80 mayors currently imprisoned in Turkey at the end of April:

“There are currently two co-chairs and nine HDP deputies in jail. In addition, more than 80 Kurdish mayors are still in prison. HDP co-chairs, deputies, and co-mayors are prosecuted because of their speeches and political activities. The appeals HDP made to the Constitutional Court in November 2016 for the release of HDP co-chairs and deputies have not been reviewed yet. And neither has the European Court of Human Rights started reviewing HDP’s applications regarding both the lifting of legislative immunities of its deputies and their arrest.”

On the same day Parliament stripped Figen Yüksekdağ of her status as a member of parliament, Selahattin Demirtaş, himself arrested in the crackdown on November 2016 and accused of terrorist charges (…in a “500-page indictment, the prosecutor levels a total of 12 charges against Demirtas, including leadership of a terrorist organization, spreading terrorist propaganda and incitement, demanding up to 143 years in prison for the HDP leader.” Sibel Hurtas, Al Monitor, February 8, 2017) – was sentenced to 5 months in prison for: “insulting the Republic of Turkey, the Turkish nation, the Turkish state and state institutions.”

Not that it probably matters but “…the HDP denies direct links with the PKK and promotes a negotiated end to the Kurdish conflict, which has claimed hundreds of lives since a peace process, once led by Erdogan and the AK party, collapsed in 2015.” (Al Jazeera)

What can we say?.. Only to send this message from another Turkish dissident who spent a lot of time, most of his short life ultimately, either in Turkish prisons or in exile for his left wing views and his struggle against dictatorship and repression, Nazim Hikmet:

Some Advice to Those Who Will Serve Time in Prison

If instead of being hanged by the neck

for not giving up hope

in the world, your country, your people,

if you do ten or fifteen years

apart from the time you have left,

“Better I had swung from the end of a rope

You’ll put your foot down and live.

It may not be a pleasure exactly,

but it’s your solemn duty

to live one more day

to spite the enemy.

Part of you may live alone inside,

like a stone at the bottom of a well.

But the other part

must be so caught up

in the flurry of the world

that you shiver there inside

when outside, at forty days’ distance, a leaf moves.

To wait for letters inside,

or to lie awake all night staring at the ceiling

is sweet but dangerous.

Look at your face from shave to shave,

watch out for lice

and for spring nights,

to eat every last piece of bread-

the woman you love may stop loving you.

to the man inside.

To think of roses and gardens inside is bad,

to think of seas and mountains is good.

Read and write without rest,

and I also advise weaving

I mean, it’s not that you can’t pass

ten or fifteen years inside

as long as the jewel

on the left side of your chest doesn’t lose it’s luster!

In an interview with co-chairman of the HDP Figen Yuksekdag