HDP MP Sarıyıldız invited the UN, as an organization responsible for pursuing global peace, to fulfill its mission by pressuring Turkey to end its occupation of Afrin 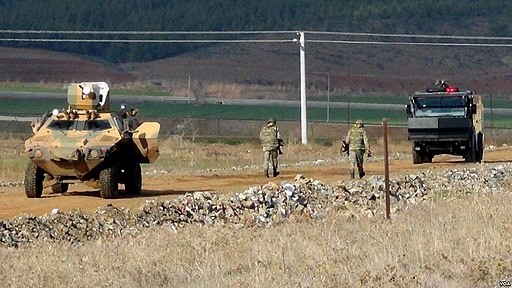 «The Turkish state is denying killing civilians in Afrin. However, in wars the truth is lost first. The three-month-old Miray Ince who was killed in Cizre and three-month-old Diyana Xazî Salih who has been killed in a bombardment in Afrin are the victims of the same silence. If we look at what has happened so far, the Turkish state and FSA’s progress towards Afrin may lead to a horrific massacre.»  HDP MP Faysal Sarıyıldız

HDP MP Faysal Sarıyıldız, – who himself was targeted by Turkish gunfire 2 years ago,  as he attempted to help civilian casualties of the Turkish military assault on the Kurdish communities of Northern Kurdistan – has written a letter to the United Nations Secretary General António Manuel de Oliveira Guterres…

An open letter to the United Nations Secretary General António Guterres on the Turkish state’s invasion operation against Afrin Canton of Northern Syria:

“The Turkish state’s operations against Afrin, initiated on 20 January 2018, is in its 47th day. According to figures given by international human rights organizations at least 250 civilians, mostly women and children, have been killed in bombardments with 600 people wounded. After rising civilian deaths the United Nations decided to declare a 30-day ceasefire on 24 February 2018. Although it is a member of the UN, Turkey has disregarded this decision and continues its bombardment of Afrin with civilian casualties hitting new heights every day. Despite this occupation occurring in front of the world’s eyes, the lack of action by the UN is having a detrimental effect on the organization’s respectability and reliability. This is being watched with anger by the Kurds and all the peoples of the world.

We have seen many times in the past that states can be stopped and punished by international organizations that they are a member of. Turkey’s Afrin operation has no legitimate grounds. The Turkish state is using UN’s article 51 to legitimize its attack. As a matter of fact, there has been no attack against Turkey from Afrin. The local administration in Afrin has stated that an observational delegation can come to Afrin to investigate allegations of Turkish state atrocities. The Turkish state has also not received any permission from the Syrian state to enter its territories. The YPG, who is defending its people in Afrin, is responsible for the defeat of ISIS in Kobani, Raqqa and other parts of Syria.

Erdogan, who possesses the second biggest army in NATO, along with the “Free Syrian Army” is attacking Afrin, a city that has maintained relative peace and stability throughout the Syrian civil war, in order to invest in the nationalist voter base and also pursue expansionist regional policies.

The UN should have prevented this occupation, which has the potential to destabilize the whole region, from the outset. While this is what should have happened, instead the UN Secretary General’s Spokesperson Stephane Dujarric said “local administrators in Afrin are preventing civilians from leaving Afrin.” I am sorry to say that statements like these only serve to encourage Erdogan. The people of Afrin do not want to leave their lands. Where else can the people of Afrin go? Afrin was actually a safe haven for over a hundred thousand people who had fled the war in neighbouring Al-Bab and Jarablus. Right now it is an area where people of all ages are dying from bombardments night and day. Footage of the FSA, who are fighting alongside the Turkish army in Afrin, mutilating a woman fighter’s dead body is only one of many documents showing the brutality.

I am a live witness to the massacre that occurred in the town of Cizre on 14 December 2015, on the 79th day of the blockade. I was there as an elected representative of my people. 280 people were massacred, from three-month-old babies, to eighty-year-old mothers. I was fired upon, and almost killed, while trying to take injured civilians to the hospital. Two weeks after this incident, the Turkish state and its state of the art equipped army burned 143 people alive in the basements of buildings in Cizre.

The United Nations High Commissioner for Human Rights, Zeid Ra’ad Al Hussein, had stated that what had occurred in both Sirnak’s town of Cizre and Diyarbakir’s town of Sur were “shocking”. The subsequent report that was released by the United Nations High Commissioner for Human Rights had deemed what had happened as “chaos”. The report stated that two thousand people had been killed, half a million people had been displaced, and that the towns were systematically destroyed. The report had also called upon the Turkish state to respect the fundamental rights of civilians.

Turkey did not respect both the European Court of Human Rights’ judgment on protecting civilians and the UN’s ‘humanitarian plea’. The subsequent silence of the European Union and the United Nations had only served to encourage the Turkish state. With time, the Turkish government became more and more authoritarian. The UN’s Special Rapporteur on Torture, Nils Melzer, said in a statement published last week that they were concerned by the rising cases of torture and malpractice in Turkey.

The Turkish President Erdogan has already turned into a war machine. Erdogan is proud of being the leader of a country where the people who ask for peace are punished, and the people who want war are rewarded. Everyday he announces civilians who are being massacred like a match score. The worrying statement by Turkish Prime Minister, Binali Yildirim, “we will place 350,000 Syrians into Afrin” is absolutely an indication of the planned ethnic cleansing based on demographic change in Afrin. The Turkish state’s previous assaults in Jarablus, Azzaz and Mareh resulted in the Interior Ministry appointing governors and heads of security for these towns,  effectively turning these areas into Turkish run territories.

The Turkish state, which has been encouraged by the fact that international institutions such as the UN have largely remained silent, continues its aggressive and invading stance now in Afrin. The Turkish state is denying killing civilians in Afrin. However, in wars the truth is lost first. The three-month-old Miray Ince who was killed in Cizre and three-month-old Diyana Xazî Salih who has been killed in a bombardment in Afrin are the victims of the same silence. If we look at what has happened so far, the Turkish state and FSA’s progress towards Afrin may lead to a horrific massacre.  If this is not avoided, the position of the UN, if it remains a mere on-watcher, will be questionable.

The UN, which was created after the destruction caused by the Second World War, must take a more active stance against this tragedy in the Middle East. The offensive initiated by Turkey against Afrin has the potential to ignite a new regional war. We invite the UN, as an organization responsible for pursuing global peace, to fulfill its mission by pressuring Turkey to end its occupation of Afrin.”