the Permanent Peoples’ Tribunal will meet on 15 & 16 March to examine the crimes committed by the Turkish Republic against the Kurdish people, both on its own (and Kurdish) territory and abroad 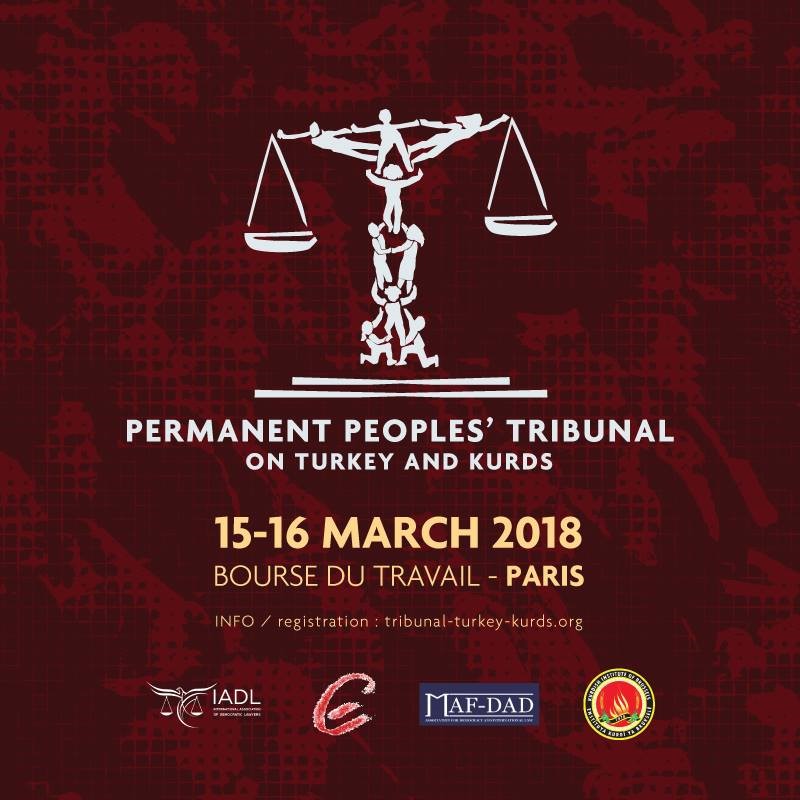 At the request of 4 organisations: the International Association of Democratic Lawyers (IADL), the European Association of Lawyers for Democracy and World Human Rights (ELDH), Mafdad, (an organization based in Germany of Kurdish and German Lawyers), and the Kurdish Institute of Brussels, the Permanent Peoples’ Tribunal will meet on 15 & 16 March to examine the crimes committed by the Turkish Republic against the Kurdish people, both on its own (and Kurdish) territory and abroad.

The proposal was formally accepted by the Tribunal on the 14th December 2017 and the Tribunal itself will be held on 15th and 16th March 2018 in the French capital Paris, in the Bourse du Travail, Salle Eugène Henaff, 29 Boulevard du Temple.

«During the two days a panel of independent judges appointed by the Permanent Peoples’ Tribunal [will] examine an indictment served upon the Turkish State and some of its officials. Turkey has been criticised by respected human rights organisations, governments, international bodies for violations of the right to freedom of expression, freedom of organisation etc. These violations have been extensively documented and some of them also submitted to the European Court of Human Rights. This indictment will therefore focus on two specific questions which have been less examined:

The first main part of the session will concentrate on the aforesaid period and examine the events that occurred in the main Kurdish cities such as Diyarbakir, Cizre, Sirnak during this period. Several sources have reported the use of aircrafts, tanks and artillery by the Turkish army in civilian neighbourhoods of these cities causing massive destruction and loss of lives.

One of the latest examples is the assassination in Paris on January 9, 2013 of three women. In Turkey such targeted killings by “unknown perpetrators” have occurred very often in the 1990’s. The second main part of the session will examine whether these crimes can be considered as “state crimes” for which the Turkish State is directly or indirectly responsible.»

“The dictates of public conscience can become a recognized source of law and a tribunal emanating directly from the conscience of the people reflects an idea that is bound to grow. It is claimed that institutions derive their power from the people, but actually these two have moved further and further apart and only a major public initiative can try to build a bridge between the people and power.” (Lelio Basso)

The Permanent Peoples’ Tribunal was established in Bologna in 1979 following on from the work of the Russell Tribunal II which investigated the crimes committed by the Latin American dictatorships in the mid-70’s. The «TPP is a grass-root initiative and the result of the need to create an independent tool for researching and analysing for the cognitive, cultural and doctrinal development needed to start the process of liberation and justice of the people….the existence of the Permanent People’s Tribunal is due, even today, to the absence of a competent international court to rule on the allegations and claims of individuals conceived in their collective dimension.»

The work of the Tribunal is based on the Universal Declaration of the Rights of Peoples proclaimed in Algiers in 1976 as well as the other international agreements protecting human rights. «According to the Charter, peoples are important collective subjects but marginalized by a law designed for States as the only recipients of rights, including the individual and collective dimensions in a single legal system serving both individuals and peoples.»

Sessions of the Permanent Peoples’ Tribunal

Since its establishment and up to the present, the Tribunal has held 42 sessions (list) on a variety of human rights violations, including crimes against peace and against humanity, cases of genocide «and…crimes—not yet established—attributable to economic and political activities promoting poverty, inequality, exclusion.» The most recent –  The Session on State Crimes Allegedly Committed in Myanmar against the Rohingyas, Kachins and Other Groups – released its verdict in October 2017.

«The indictment consists of 100 pages and it’s believed to include the case of three Kurdish women revolutionaries who were murdered in Paris back in 2012 by a Turkish spy. Recently two MIT officials captured by the PKK confessed Turkey’s role in the murders of Sakine Cansiz, Fidan Dogan and Leyla Saylemez.»

Since the termination of the peace process in Turkey between Ankara and the PKK and the subsequent military incursion into Northern Kurdistan (south-east Turkey) many people and international organisations have been calling, so far unsuccessfully, for the Turkish State to be held accountable for the atrocities committed in this region during its extended «curfews», in particular in Cizre, Nusaybin, Sirnak and Diyarbakir in 2015-16, which witnessed the death of many civilians and the indiscriminate destruction of whole neighbourhoods.

Despite their appalling isolation in times of need,  the Kurds have friends among the international community. Former leader of Sinn Fein, Gerry Adams is one of the voices pledging support for the Tribunal.

“I am sending you a message of support from Ireland on behalf of myself and of Sinn Féin. It is support for the permanent tribunal into relationships between the Turkish government and the Kurds – and there have been serious allegations of violations of international law by the Turkish government and its agents and agencies in their dealings with the Kurdish people. So I applaud the efforts to legally explore those allegations to legally hold the Turkish Government to account and I wish you well.”

Global Rights editor and writer, Orsola Casagrande, will also attend the Tribunal and provide updates for each of the day’s hearings.

The invitation sent to Turkish officials to attend has, so far, not been responded to.

Maybe – as is set out in the indictment against them, prepared by the panel of international lawyers – they are currently too busy ‘neutralising’ children and old people in the Afrin Region of Northern Syria, to consider their defence?

What is the Permanent Peoples’ Tribunal?