AFRIN: NEW ISIS CAPITAL ON THE WAY – VIA TURKEY?

Since Turkey gained control of the Afrin Region of Rojava following its entry to Afrin City on March 18 after 58 days resistance by the Kurdish YPG and its allies, concern has continued to grow about the fate of the region 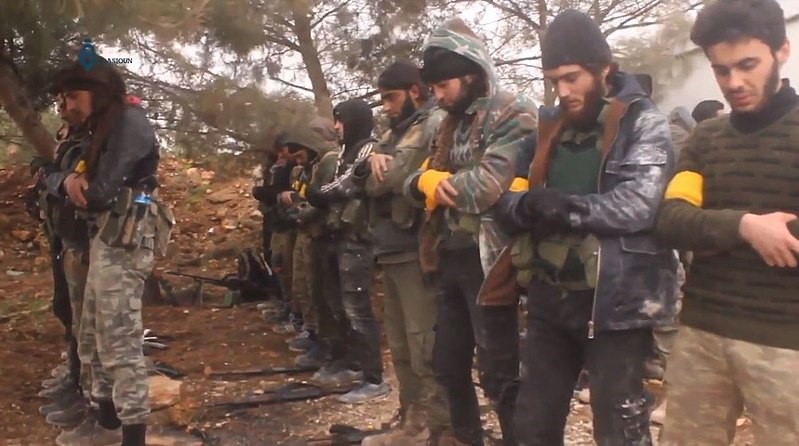 Since Turkey gained control of the Afrin Region of Rojava following its entry to Afrin City on March 18 after 58 days resistance by the Kurdish YPG and its allies, concern has continued to grow about the fate of the region.

On Tuesday 3 April, the Afrin Autonomous Administration of the Democratic Federation of Northern Syria (Rojava) released a statement expressing its concerns and alleging that the Turkish government plans to:

“…establish a capital for ISIS in Syria as an alternative to Raqqa and Mosul.”

“The aim of the Turkish invading state is to conduct demographic change and restore the Ottoman era. To make this objective real, Turkey wants to spark a war among Syrian people so that it can easily run its politics in the region … It is exploiting Syrian citizens to establish a capital for ISIS … As a result the region will never be secure…”

They also stated that “Turkey is using terrorism to pressure Europe and Middle Eastern countries” and  called on all Syrians to “reject these policies and not to move to areas invaded by Turkey.”

Turkey is currently engaged in setting up its own administration for the Afrin region which is causing conflict and division among Kurdish groups:

“Hatay Governate will be responsible for coordinating the administration in Afrin, which will be attached to Antakya, the seat of Hatay province 12 miles away from the Syrian border, Hasan Şindi, the spokesperson of the Afrin Liberation Congress (ALC), told Deutsche Welle (DW) on Mar. 30.” (Ahval)

Hatay Province is, of course, now a part of Turkey. Its administrative capital is Antakya (Antioch); Hatay itself was allegedly annexed by Turkey with the European powers support:

“Sovereignty over the province remains disputed with neighbouring Syria, which claims that the province was separated from itself against the stipulations of the French Mandate of Syria in the years following Syria’s independence from the Ottoman Empire after World War I. Although the two countries have remained generally peaceful in their dispute over the territory, Syria has never formally renounced its claims to it.”  (Wikipedia)

Turkey’s use of proxy armies of Islamist militia is obviously part of what is fueling concern by the Kurdish administration who have fought a long, difficult and costly battle with ISIS/DAESH for Kurdish control of its own region.

However, there are also a significant number of media reports investigating the links between ISIS/DAESH and the current Turkish regime of President and Chairman of the ruling Justice and Development Party (AKP) Recep Tayyip Erdoğan, which seem not to have influenced its NATO allies who continue to turn a blind eye to the deteriorating situation of the current Turkish regime as it swerves sharply to the right and colludes in destabilising a region already in an enormous state of crisis:

Wikipedia has published an extensive summary of allegation against the Turkish State which may well be worthy of review by Turkey’s allies as the Turkish military continues to extend its presence in northern Syria. Here are links to just some of them worth exploring in order to assess Kurdish concerns:

Patrick Cockburn: there is “strong evidence for a degree of collaboration” between the Turkish intelligence services and ISIL, although the “exact nature of the relationship … remains cloudy”.

David L. Phillips of Columbia University’s Institute for the Study of Human Rights, “who compiled a list of allegations and claims accusing Turkey of assisting ISIL, writes that these allegations ‘range from military cooperation and weapons transfers to logistical support, financial assistance, and the provision of medical services’”.

A former ISIS member: “ISIS commanders told us to fear nothing at all because there was full cooperation with the Turks…” “ISIS saw the Turkish army as its ally especially when it came to attacking the Kurds in Syria.”

“Turkey has been accused of becoming a transit country for such fighters and has been labeled the ‘Gateway to Jihad’.”

The Guardian stated that Turkey, late 2014: “for many months did little to stop foreign recruits crossing its border to Isis”. Also: “…an ISIL commander stated that ‘most of the fighters who joined us in the beginning of the war came via Turkey, and so did our equipment and supplies’, adding that ISIL fighters received treatment in Turkish hospitals.”

President Barack Obama’s administration “told the Turkish government to close its borders to ISIS fighters. A USA senior official said in the Wall Street Journal ‘The game has changed. Enough is enough. The border needs to be sealed,” “This is an international threat, and it’s coming out of Syria and it’s coming through Turkish territory.’”

Turkey has openly supported jihadi groups: “such as Ahrar ash-Sham, which espouses much of al-Qaida’s ideology, and Jabhat al-Nusra, which is proscribed as a terror organisation by much of the US and Europe.”

Vladimir Putin (at that time, if no longer): “IS has big money, hundreds of millions or even billions of dollars, from selling oil. In addition they are protected by the military of an entire nation. One can understand why they are acting so boldly and blatantly. Why they kill people in such atrocious ways. Why they commit terrorist acts across the world, including in the heart of Europe…”

Also: “Western intelligence officials said that they can track the ISIS oil shipments as they move across Iraq and into Turkey’s southern border regions.”

Former Iraqi member of Parliament Mowaffak al-Rubaie said: “there is ‘no shadow of a doubt’ that the Turkish government knows about the oil smuggling operations. “The merchants, the businessmen [are buying oil] in the black market in Turkey under the noses – under the auspices if you like – of the Turkish intelligence agency and the Turkish security apparatus.”

1          most of the oil produced in Islamic State-held territory in Iraq and Syria was being smuggled through Turkey.

2          He also mentioned that he sees no evidence that Turkey wants to fight ISIS.

3          In addition he told that Turkey wants to revive the Ottoman Empire.

Israel’s defence minister, Moshe Ya’alon, has accused Turkey “of buying oil from the ISIS and funds ISIS militants. He, also, said that Turkey had ‘permitted jihadists to move from Europe to Syria and Iraq and back’”.

The US Director of National Intelligence, James R. Clapper, said: “that he was not optimistic that Turkey would do more in the fight against the Islamic State. ‘I think Turkey has other priorities and other interests.’ He also cited public opinion polls in Turkey that show Turks do not see the Islamic State as a primary threat.”

Vice President of the USA at that time, Joe Biden, during a speech at Harvard accused “Turkey and the Gulf countries of funding, supplying and supporting ISIL”.

Donald Trump has also been known to accuse Turkey of supporting ISIS.

The King of Jordan, Abdullah, said that the Turkish president, Recep Tayyip Erdoğan: “…believes in a radical Islamic solution to the problems in the region and the “fact that terrorists are going to Europe is part of Turkish policy, and Turkey keeps getting a slap on the hand, but they get off the hook”.

Egypt has accused Turkish President Recep Tayyip Erdoğan “of being a supporter of terrorists who seek to “provoke chaos” in the Middle East.”

Syria’s president Bashar al-Assad during an interview in 2015 mentioned “’that military and logistic support from Turkey was the key factor in ISIL takeover of Idlib’…he also blamed Turkey for the failure of a humanitarian ceasefire plan in Aleppo. He told that: ‘The Turks told the factions – the terrorists that they support and they supervise – to refuse to cooperate with de Mistura’”.

Iran accused Turkey “that she is the main culprits in supporting the terrorist movements of ISIL.”

“On July, 2016, a leaked confidential report produced by the German Interior Ministry accused Turkey of supporting terrorist groups across the Middle East including various Islamist groups fighting in Syria.”

Columbia University “assigned a team of researchers in the United States, Europe, and Turkey to examine Turkish and international media assessing the credibility of allegations and published a research paper entitled “ISIS-Turkey Links”. The report draws on a variety of international sources and present many allegations that appeared in the media.” (“Author’s Note: Information presented in this paper is offered without bias or endorsement.”)

A Summary of the allegations documented:

In an email to The Guardian, Noam Chomsky accused Recep Tayyip Erdoğan of hypocrisy. He said: “Turkey blamed Isis (for the attack on Istanbul at 2016), which Erdoğan has been aiding in many ways, while also supporting the al-Nusra Front, which is hardly different.”

“Turkey of preventing Christians from fleeing Syria while allowing jihadists to cross its border unchecked. He said on the Vatican Radio, “In the north, Turkey allows through lorries, Daesh (ISIS) fighters, oil stolen from Syria, wheat and cotton: all of these can cross the border but nobody (from the Christian community) can pass over.”

“Transcripts of telephone calls between IS jihadists and Turkish officers has been revealed.”

On February 2016, Syria and the Syrian Observatory for Human Rights accused

“Turkey of allowing Islamist fighters to travel through Turkish territory to reinforce Islamist rebels in Azaz and Tal Rifaat.”

With this amount of allegations and from so many quarters, is it any wonder that the exiled Afrin administration has serious concerns about developments in Afrin now that it has been settled by Turkey and its Islamist proxies?

[CC BY 3.0 (https://creativecommons.org/licenses/by/3.0)], via Wikimedia Commons