Palestinian poet and Dareen Tatour was surrounded by supporters on Thursday, May 3 as the Nazareth Magistrate’s Court found her guilty of incitement to violence and supporting a terror organization 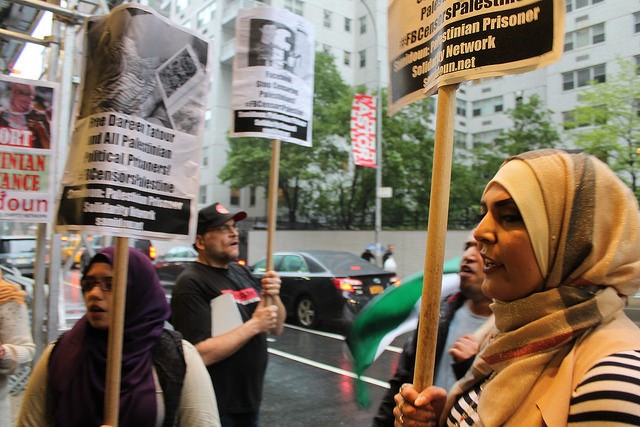 Palestinian poet Dareen Tatour was surrounded by supporters on Thursday, May 3 as the Nazareth Magistrate’s Court found her guilty of incitement to violence and supporting a terror organization. The conviction centered around three social-media posts, including the poem “Resist, My People, Resist Them“:

The thirty-six-year-old poet, who is an Israeli citizen, has been in and out of detention since October 2015, when she was arrested in her home near Nazareth. It was in November 2015 that she was charged with “incitement” and supporting terrorism.

The writer and activist who writes under the name Yoav Haifawi was at the court, and said that in Tatour’s statement following her conviction, she said she’d had no expectation of justice:

#DareenTatour after her conviction: I never expected justice from Israeli courts pic.twitter.com/BDsu7JvWyc

“Dareen Tatour has been convicted for doing what writers do every day – we use our words to peacefully challenge injustice. I was incredibly honoured to meet Dareen at her home last year and PEN will continue to call for justice in this case.”

Although Tatour’s case has garnered international support, particularly from writers’ groups, according to Nadim Nashef of Al-Shabaka, such arrests have been accelerating: “The Palestinian Prisoners Club, a non-governmental organization dealing with prisoners’ rights, estimates that more than 150 arrests took place between October [2015] and February 2016 based on Facebook posts expressing opinions on the uprising.”

More work by Tatour in translation:

‘A Poet’s Hallucinations,’ by Dareen Tatour

A New Translation of Palestinian Poet Dareen Tatour’s ‘I… Who Am I?’

‘A Poet Behind Bars’: A New Poem from Dareen Tatour

New Poems by Dareen Tatour, Under House Arrest in Israel

M Lynx Qualey is the editor-in-chief of the ArabLit cooperative.