In 2011, Antoun Issa, a Lebanese-Australian journalist, looked at the “29th anniversary of the most grueling moment in the six-decade long Arab-Israeli conflict – the massacre at Sabra and Chatila.” 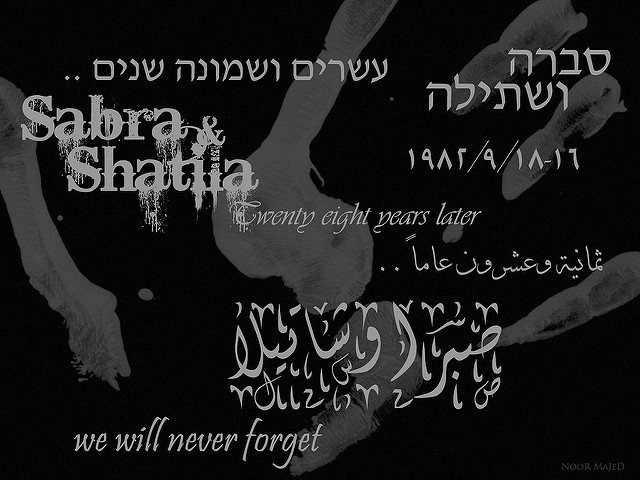 In 2011, Antoun Issa, a Lebanese-Australian journalist, looked at the “29th anniversary of the most grueling moment in the six-decade long Arab-Israeli conflict – the massacre at Sabra and Chatila.” – and how the world aka “the blogosphere” responded. It “was swarming with tributes to the victims of the massacre.” Below is his article. And the memories, and the questions…lest we forget…

September 16, 2011, marked the 29th anniversary of the most grueling moment in the six-decade long Arab-Israeli conflict – the massacre at Sabra and Chatila.

On this day in 1982, Israeli-backed Lebanese Phalangist (Arabic: al-Kataeb) militiamen entered the Sabra and Chatila Palestinian refugee camps in West Beirut, and slaughtered at will. Age or gender were never a consideration, as the elderly, women, children and even toddlers became easy prey.

The death toll has never been verified, ranging from 800 to 3,500, which is testimony to the destruction wrought by the Phalangists that many bodies were never uncovered.

The massacre occurred under the watch of the Israeli Defense Force, who at the time had gained control of West Beirut, guarded the entrances to the camps, and lit flares at night to provide visibility to their Lebanese allies.

An Israeli investigation, the Kahan Commission, found then Israeli Defense Minister Ariel Sharon personally responsible, and recommended his resignation from the Israeli Government.

The blogosphere was swarming with tributes to the victims of the massacre.

At six on Thursday evening. In the first penetration, three hundred and twenty men were brought on thirty trucks. Four gangs invading from four approaches. These were the most blood-addicted, rape-happy, battle-addled of militiamen, men long ago surfeited on outrage, men who required ever more extreme atrocities to stir their glutted senses. Ever wilder, ever sharper.

Israel lit the sky for them. White phosphorus flares trailing and dancing. Fire above like a terrible sun in the ceiling, a sun switched on in anger, while the children are sleeping…

Carelessly, they shot small children too, and their annoying mothers. Plus things that shrieked and things that ran. House to house, to the inner room, to the furthest wall. Hot work. Soon they shot with greater care, enjoying the sport, slashing and chopping and stabbing too. They swigged whisky and araq, snorted cocaine from flesh and knife blades.Throughout Thursday night bulldozers levelled the buildings closest to the camp entrance. A machine was sent in to dig trenches. Wailing and shooting whirled around the streets. People shut themselves in, waiting. They whispered amongst themselves, guessing the direction of the slaughter, or making excuses for the noise. Some still didn’t know the extent of it, or didn’t believe. Tomorrow would make believers of them.

They huddled in the darkest dark. Outside the night sun shone; inside not even a candle. Dark as dark as ignorance. The dawn brought smoke and a smell of blood.

On Friday the massacre intensified. Reached its fiercest height in the area surrounding the Gaza Hospital. Finally waned to a dribbling halt around 8am on Saturday morning. A long debauch. More than 36 hours of it.

Christof Lehmann offers his tribute at the Sabbah Report:

Twenty nine years have past, my goodness. I’ll never forget you wonderful people. Neither will I forget the extremes of inhumanity and human compassion, the ugliness and beauty, the laughter and grins while murdering with a disregard for humanity and life impossible to comprehend, and the tears and cries of deepest despair and suffering no human being, not even an animal should experience.The days of terror I had to share with you were also the greatest lesson on human greatness, and the deepest beauty of the collective Palestinian Spirit, I ever had to endure.

Even after 29 years I still can’t comprehend the full impact the experience has had on me, nor on you. At least I had the privilege to leave after it was possible to get out of the ruins of Sabra and Shatila. You could not. It makes me sad, really. So sad that I never returned to face the demons in my memory and my bad conscience over leaving you behind. There is so much I don’t know because I left you behind, beaten, bloody in body mind and soul. Broken glass that shines like a diamond in the sun, crying out to the world, “let us live in peace”. The only thing I know with absolute certainty is this:

Neither you, nor me, nor anyone should ever experience the inhumanity of pure unleashed evil, and until my last breath I will do what I can to prevent anything like Sabra and Shatila from ever happening again.

As you see, I am utter failure.

David Samel brought attention to Israel’s other crimes during its invasion of Lebanon in 1982 in a comment at Mondoweiss:

As terrible as these atrocities were, they were only icing on the cake of Israel’s June 1982 invasion of Lebanon, based upon a false pretext, that took the lives of about 15,000 to 20,000 Lebanese and Palestinians. “Liberal” Israelis actually point to Sabra and Shatila to demonstrate how progressive their country is. After all, hundreds of thousands of Israelis demonstrated against the massacres, and the Kahan Commission held bigwigs Sharon and Eitan indirectly responsible. The movie “Waltz With Bashir” showed Israeli veterans sensitively coping with their memories and their guilt. But the whole summer of 1982 was filled with savagery that exceeds the more recent 2006 Lebanon and 2008-9 Gaza bombings/invasions combined. It’s a crime that Begin and Sharon died (in Sharon’s case, virtually) without ever having to answer for this high-water mark of mass murder and state terrorism.

Marcy Newman at Body on the Line argues that marking the anniversary is in vain while the plight of Palestinian refugees continues to be ignored:

What I find especially disturbing about all of this is how everyone remembers the anniversary of the Sabra and Chatila massacre but no one seems to remember the destruction of Nahr el Bared refugee camp. It is rather convenient that Mitchell and his Lebanese cohorts discussed Palestinian refugees, but of course did not reveal any tangible information about their right of return. For Palestinians from Nahr el Bared this right of return is now two-fold: first to their camp and then to Palestine. If only that first step could be eliminated and they could return home immediately.

This is why I am feeling like I am against anniversaries. Anniversaries, ideally, should be a time when you reflect upon the person/people/event. It should make you act in a way that honors that memory. The only real way to honor the memory of the massacre in 1982 or the destruction of Nahr el Bared in 2007 is to fight for the right of return for Palestinian refugees. But no one is talking about that, nor are they talking about reconstructing Nahr el Bared

@motantawi: A tragedy is a tragedy. Commemorating 9-11 doesn’t outdo or erase the memory of the tragedy of Sabra and Chatila so why the comparison?

@rida_faisal: So why is it that the victims of Sabra and Chatila don’t get a massive memorial ceremony? News coverage? Oh right, it’s not American blood.

@HamzehLattouf: #Sabra and Chatila are ugly crimes, the uglier crime was committed by the “civilized world” for letting the murderers get away with it

@fadiseikaly: and here are my 140 characters dedicated to the victims of Sabra And Chatila in 1982. I hope in his coma, Sharon sees their faces every day.

@omerrcelik: Today is the 29th anniversary of Sabra and Chatila massacre. The day of one of the most brutal attacks in history, carried out by Israel

@IamDiijah: The world will not observe a minute of silence for the 3,500 innocent Palestinian victims of Sabra and Chatila

@KShihabi: #Sabra and Chatila massacre 16-19/9/1982… No one has paid the price yet #Palestine #FreePalestine

While the remembrance of Sabra and Chatila is widespread across social media, the Lebanese blogosphere remained largely mute on the massacre.

As with the entire Lebanese Civil War, an air of forgetful silence is embraced by many Lebanese, as evident by the blogosphere’s near complete avoidance of the Sabra and Chatila anniversary.

For many Lebanese, the Civil War and its atrocities remain a dark memory that one never mentions, suppressing the wounds.

Rather, life goes on as normal, oblivious to the crimes against humanity once carried on Lebanese soil.

As such, no Lebanese perpetrator of the Sabra and Chatila massacre, or any massacre in the Lebanese Civil War, has ever been brought to justice.

Antoun Issa, Lebanon, Sabra and Chatila, Top
You may also like