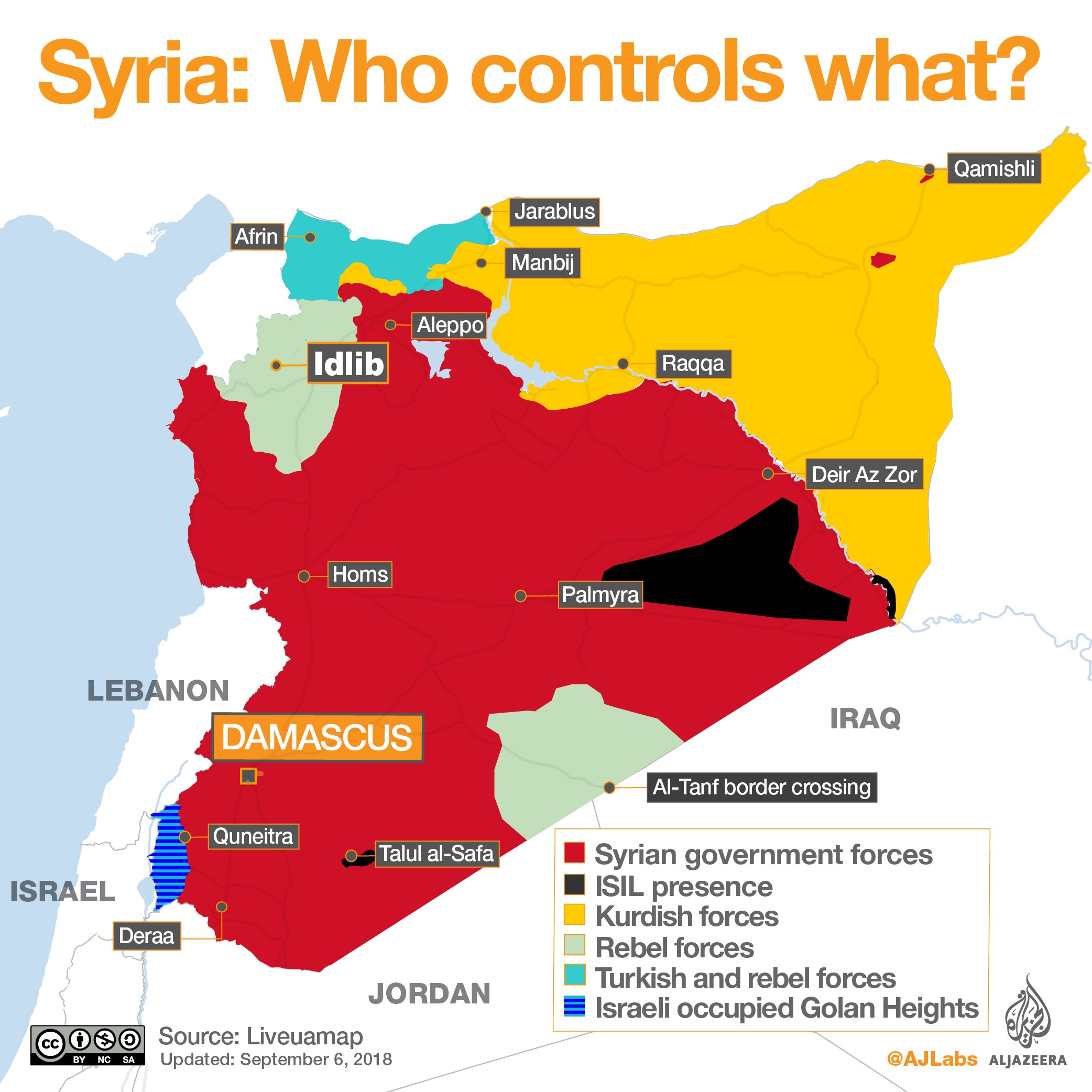 This article is a brief analysis of the future of Rojava in Syria in line with the attack of Assad’s forces on Idlib’s Province. The battle of Idlib can be a crucial one for all sides who are involved especially for the regime and the Kurds in Rojava .

There are a few scenarios that the Kurdish forces there and its self rule administration are facing. There is also a strong possibility after this battle that the Kurdish question there can be on the top of Assad and Russia’s agenda to be resolved either way.

“We are at the final stage of solving the crisis in Syria and liberating whole territory from terrorism”, stated Walid al-Moualem, Syria’s foreign minister when he met Sergei Lavrov, his Russian counterpart, in Moscow.

The Assad Regime and its allies are preparing themselves for the upcoming battle for Idlib. The military launch might start this month, September, or the beginning of October. The war will likely bring victory to Assad and catastrophe to the 2 million citizens of Idlib where 1.6 million are already in need of humanitarian aid.

Idlib, near Aleppo, Hama and Homs, is a stronghold of over 60,000 anti-regime rebels and over 10,000 jihadists. To justify attacking Idlib, Assad often claims the province is full of terrorists.

Although the battle of Idlib looks rather small with any parties like the US, Russia, Turkey and Assad and their other allies’ involvement directly or indirectly, it will, no doubt, be a big battle. Each of these parties has their own stake in Idlib and the region. Assad is trying to control the whole country by defeating opposition rebels and terrorist groups. He also wants an open hand over the Kurds in Rojava either to suppress or negotiate with them on his own terms and conditions. Turkey, which has supported anti-Assad forces and terrorist groups throughout the war for many reasons, has its own interests too. The US and Russia have been the major powers in the region and are arch enemies. Their intervention and involvement in Syria only serves their own interests economically, politically and financially and protects the power of their friends in the region.

As for Rojava’s situation, its future within the Idlib battle scenario is quite complicated. In my opinion, Rojava’s position has been weak since July 2015 when Erdogan launched a brutal attack on the Kurdistan Workers’ Party (PKK) forcing them to become involved in war. On the other hand, the Democratic Union Party (PYD) has been aligned with the US in the war against Islamic State (IS), and has committed many deadly mistakes mentioned in my previous article. Please see the link below:

The battle of Idlib will happen sooner or later. It will be decisive and crucial for the major powers and their allies in the region and also for Rojava. At the moment, US opposes the attack because it would lead to a “humanitarian catastrophe”. The White House warned on Tuesday 04/09 that the US and its allies would respond “swiftly and appropriately” if Assad used chemical weapons. The question here is why the US and its allies were not concerned about a “humanitarian catastrophe” when Turkey invaded Afrin and massacred hundreds of innocent people? In Idlib, the US is probably concerned with defeating the terrorist groups rather than innocent people because they want the game to last longer to achieve completely what they planned in the first place.

Rojava and its self-rule administration and the SDF cannot be ignored during the attack on Idlib and after the battle as well. It cannot be left as it is. The Rojava question and its future must be resolved either way. Rojava is facing many possible scenarios. If Assad prevails in this battle, as commonly predicted, the position of the Kurds in Rojava will be weaker. Assad will be in a very strong position, securing his hold on power for a while. In this situation, he can impose his terms and conditions on the PYD and SDF while they are in a weak position. There is also the possibility of the SDF joining Assad’s forces for the battle of Idlib while the PYD is negotiating with the regime. As we can see, the PYD and SDF are in a very complicated situation. The SDF may join Assad’s forces against the rebels; an action which is opposed to US interests. In this circumstances the PYD and SDF might be abandoned by the US which, in the near future, may encourage a Turkish attack on Rojava or, at least, Turkey may try to occupy the towns on its border currently under control of the SDF.

If Assad fails to defeat the rebels in Idlib, it won’t be in the interest of Rojava either, because Assad’s defeat will also be a Turkish victory who will then be in a better position to attack Rojava as happened to Afrin.

However, whatever the outcome of Idlib’s battle, it will be critical for Rojava as its future is tied to the battles between the forces mentioned above. The situation may become so complicated in Rojava that it will become difficult for the Kurdish people to maintain their principal aim of Democratic Confederalism.

What keeps Rojava alive is the continuing war with Isis and other terrorist groups and, also, the economic embargo imposed by regional powers. Saying this does not mean that Rojava’s movement will collapse. In my opinion, the Kurds have proved themselves and resolved many questions positively so they cannot be ignored or marginalized by any sides of the major powers and Assad’s regime I believe that, in the end, there might be some compromise between the US and Russia over Syria and its regime. The power struggle between them and their allies to reach their own aims forces Assad, or a future government in Syria, to offer cultural autonomy and some cultural rights. These rights would be far short of building Democratic Confederalism.

Libcom.org is a resource for all people who wish to fight to improve their lives, their communities and their working conditions. We want to discuss, learn from successes and failures of the past and develop strategies to increase the power we, as ordinary people, have over our own lives.

Libcom.org is licensed under a Creative Commons Attribution-NonCommercial-ShareAlike 2.5 License. If you find material published on libcom.org for which you or your organisation owns the copyright and libcom.org is not licensed to publish this material, please contact us with the URL in question and we will remove the content in question.