In November 2016, Selahattin Demirtaş, along with 12 other HDP (Halkların Demokratik Partisi) members of the Turkish parliament were arrested on ‘terror’-related charges for which he currently faces up to 142 years imprisonment if convicted 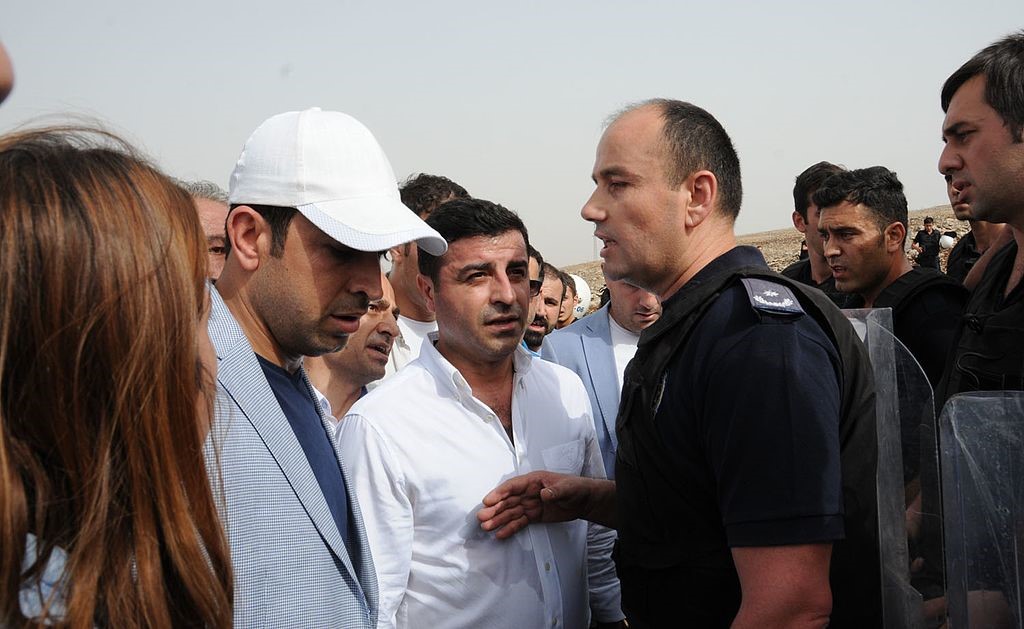 “The Court found that it had been established beyond reasonable doubt that the extensions of Mr Demirtaş’s detention, especially during two crucial campaigns, namely the referendum and the presidential election, had pursued the predominant ulterior purpose of stifling pluralism and limiting freedom of political debate, which was at the very core of the concept of a democratic society.” (European Court of Human Rights)

In November 2016, Selahattin Demirtaş, along with 12 other HDP (Halkların Demokratik Partisi) members of the Turkish parliament were arrested on ‘terror’-related charges for which he currently faces up to 142 years imprisonment if convicted. Demirtaş has remained in custody since that time.  The arrest of the HDP co-leader was widely seen as a political move by the Chairman of the ruling Justice and Development Party, Recep Tayyip Erdoğan, following the phenomenal success of the pro-Kurdish Peoples’ Democratic Party in the 2015 Turkish elections that resulted in the loss of the AKP’s overall majority.

In The case of Selahattin Demirtaş v. Turkey (no. 2) – The European Court of Human Rights (ECHR) has ordered Turkey to release the opposition deputy from prison….and, in its complex ruling this week, concluded there has been “several violations of the Convention”.

Demirtaş’ lawyer said he has applied for release following the ECHR ruling.

“Turkish president on Tuesday said the European Court of Human Rights (ECHR) ruling demanding the release of jailed former co-chairman of the Peoples’ Democratic Party (HDP) Selahattin Demirtaş was «not our concern».  Responding the reporters at the parliament, Recep Tayyip Erdogan said, «Decisions the ECHR make are not of our concern.»  Erdogan recalled that ECHR has many rulings on terror groups and they were all against those made by Turkish courts.”  Andalou, Turkey’s official press agency, said.

A few days later, on November 22, the Hurriyet Daily News quoted the president, who had himself made application to the ECHR on three occasions (in 1999 and twice in 2002) as saying:

“Yesterday, the ECHR made a ruling against our country. Turkey allegedly violated the security and election rights in the trial of a former party leader who is in relations with the terrorist organization the PKK. Have you seen any action from European Union bodies declaring that that same person has on his hands the blood of 50 people from the events of Oct. 6-8, 2014?”

“In today’s Chamber judgment in the case of Selahattin Demirtaş v Turkey (no. 2) (application no. 14305/17) the European Court of Human Rights held, unanimously, that there had been:

no violation of Article 5 § 1 (right to liberty and security) of the European Convention on Human Rights,

a violation of Article 5 § 3 (right to be brought promptly before a judge) of the Convention,

no violation of Article 5 § 4 (right to a speedy review of the lawfulness of detention),

a violation of Article 3 of Protocol No. 1 (right to free elections);

and, by six votes to one, that there had been: a violation of Article 18 (limitation on use of restrictions on rights) in conjunction with Article 5 § 3.

The case concerned the arrest and pre-trial detention of Mr Selahattin Demirtaş, who at the time of the events was one of the co-chairs of the Peoples’ Democratic Party (HDP), a left-wing pro-Kurdish political party. The Court accepted that Mr Demirtaş had been arrested and detained on “reasonable suspicion” of having committed a criminal offence. However, having regard to the reasons given by the national courts, the Court found that the judicial authorities had extended Mr Demirtaş’s detention on grounds that could not be regarded as “sufficient” to justify its duration.

Although Mr Demirtaş had retained his status as a member of parliament throughout his term of office, the Court found that his inability to take part in the activities of the National Assembly as a result of his pre-trial detention constituted an unjustified interference with the free expression of the opinion of the people and with his right to be elected and to sit in Parliament.

The Court found that it had been established beyond reasonable doubt that the extensions of Mr Demirtaş’s detention, especially during two crucial campaigns, namely the referendum and the presidential election, had pursued the predominant ulterior purpose of stifling pluralism and limiting freedom of political debate, which was at the very core of the concept of a democratic society.

The Court therefore held, unanimously, that the respondent State was to take all necessary measures to put an end to the applicant’s pre-trial detention.”

“The European Court of Human Rights has issued a ruling for the immediate release of our comrade and former Co-chair Selahattin Demirtaş. With this ruling the court has also clarified that Demirtaş’s arrest is political.”

“The ECHR ruling is binding, according to Article 90 of the Constitution and Article 46 of the European Convention on Human Rights. Turkey is bound to comply with international conventions the country has signed and to comply with this ruling.”

Another challenge for the Turkish Justice system

Selahattin Demirtaş’ own comments on the ruling (through his lawyers)

“As we have stated since the very first day, the operation against the HDP, our imprisonment and trial was based not on legal but political motives. The cases I stand trial in and the allegations put forward in this scope have all collapsed. The ECHR ruling has concretized that all the courts that passed unlawful decisions against us during this period of time, including the Constitutional Court, have committed severe violations. The new tutelage of politics on the judiciary constitutes a great danger for both democracy and the future of society.

Unfortunately, the President, who makes a statement on the subject as head of the executive power, can still state, despite this Court ruling, that he will not recognize the law and the Constitution. This issue does not appertain to me alone as it is a very grave situation for the whole of Turkish society and democracy, as has been determined in the ECHR ruling.

Our struggle for law and justice will continue under all circumstances. Despite the fact that I have been imprisoned for two years without a fair court ruling, I have never lost my faith in democracy, justice and peace. My greatest source of hope in this regard is the people and their struggle.”

Former ECHR Judge and CHP (Republican People’s Party) Izmir MP Riza Turmen stated that Turkey is obliged to comply with the ECHR’s Demirtaş ruling, stressing that Selahattin Demirtaş should be released without delay.

“Turmen stated that noncompliance with the ruling, which references  Article 18 of the European Convention on Human Rights and poses a precedent for other political prisoners, will be the confirmation that Demirtaş’s imprisonment is not about the law but about politics.

“Turmen pointed out that the arrest of a politician was cited as a violation of the right to vote and run for election, despite very narrow interpretations of said right in the ECHR protocol…

“The ECHR has ruled that laws are being used to silence the opposition, the judiciary is not independent, and that Selahattin Demirtaş is in prison not for legal reasons, but because of politics with the reference to Article 18, and ordered the immediate release of Demirtaş.”

On AKP leader and Turkey’s President Erdoğan’s comments that the ruling “is not binding for us” “Turmen stated that ECHR verdicts are binding for countries that are part of the Council of Europe.”

Likewise, it is to be expected that as a result of this ruling other HDP and opposition deputes, currently being held hostage in Turkish prisons by the AKP (Adalet ve Kalkınma Partisi) regime, will view the ECHR’s decision as a precedent and the hope remains that their incarceration as a political strategy by the ruling party will be seriously undermined as the local elections, to be held in March 2019, approach.

Meanwhile “The Court therefore held, unanimously, that the respondent State was to take all necessary measures to put an end to the applicant’s pre-trial detention.” (ECHR)

Image: HDP supporters (including Selahattin Demirtaş) being stopped from walking to Cizre, where there was a curfew in place for 8 days.