the Syrian Observatory of Human Rights who have continuously monitored the civil war in Syria, have identified an increase in US military activity in the area close to the Turkish Border 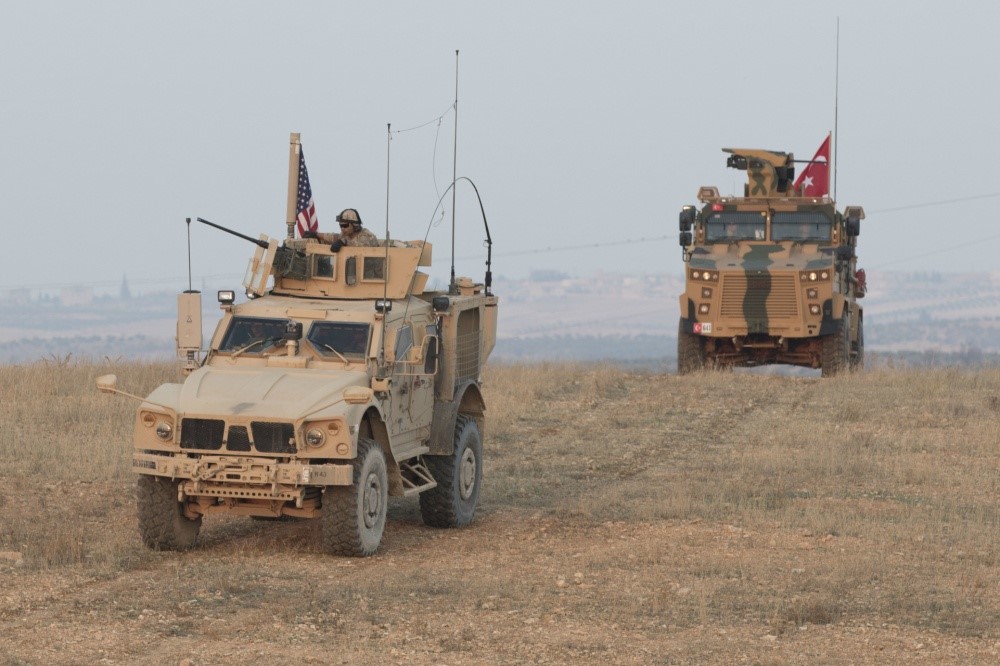 “The Americans are not being honest; they are still not removing terrorists [from Manbij]… Therefore, we will do it.”…” Turkish President Recep Tayyip Erdoğan

“Unilateral military action into north-east Syria by any party, particularly as US personnel may be present or in the vicinity, is of grave concern. We would find any such actions unacceptable…”  Cmdr Sean Robertson, Pentagon spokesman

In an update to Turkey’s announcing last week (Wednesday 12th and Thursday 13th December) that it will begin its threatened invasion east of the Euphrates into the Democratic Federation of Northern Syria “within days”, the Syrian Observatory of Human Rights who have continuously monitored the civil war in Syria, have identified an increase in US military activity in the area close to the Turkish Border. This follows its sources earlier identifying additional military equipment, logistics and resources being brought to the troubled area by the US military machine.

“…the US forces have intensified their patrols in the area extended along the border strip from Sluk to the area of Tal Abyad, …and between Ayn Al-Arab (Kobani) and Tal Abyad, as a part of operations of observing the border and attempts to prevent the Turkish military operation from being launched…”

Likewise over the weekend “hundreds of members of the Syrian Democratic Forces headed to Tal Abyad area in the northern sector of al-Raqqah countryside, and towards Ayn al-Arab (Kobani), along with heavy equipment of tanks and armored vehicles, under the preparations to repel any ground advancement by Turkish Forces and the Syrian opposition rebel and Islamic factions in the east of Euphrates area…”

It appears also that the International Coalition have already established new bases in the endangered area east of Euphrates:

“…the US Forces established 2 military bases in the countryside of Tal Abyad in al-Raqqah Province, where they set up 2 bases in Tal Rekbeh and al-Jayb areas in the countryside of Tal Abyad city, and this is the third International Coalition base in 17 days within the northern sector of al-Raqqah countryside, also, the establishment of these bases coincides with the Turkish military moves and the moves by the rebel and Islamic factions that operate under their command; to launch a military operation in the area east of Euphrates against Syria Democratic Forces, raising to at least 21, the number of bases established by the International Coalition in the Syria Democratic Forces’ controlled areas.”

The Syrian Observatory also confirmed from its sources that the International Coalition had renewed its contract with the SDF for 2019 and 2020:

“Reliable sources confirmed that the contract is based on establishing a full program for the Coalition and a way for applying it, and then renewing it every 2 years. The approval of the program came after intensive meetings between the International Coalition and the leadership of the Syrian Democratic Forces, where a mutual work mechanism was agreed upon between both parties, including the provision of military assistance to the Syrian Democratic Forces throughout the period of the contract, while signing this new contract and establishing the new program of the International Coalition’s work in east of Euphrates and areas west of it; coincided with the Turkish threats of a military operation is being hinted about by Turkey in the border area between the Tigris and Euphrates Rivers, and in conjunction with preparations for a military operation against the “Islamic State” organization in its last enclave at the east bank of Euphrates River in the eastern sector of Deir Ezzor countryside.”

Meanwhile across the border in Turkey…

…as the days pass waiting on more carnage in a country that has been decimated by war and bloodshed for the last 7 years, there has, so far (December 17th), been no military strikes reported (other than the usual, ongoing, apparently vindictive and illegal Turkish bombing of Kurdish villages)…

…instead Turkey’s Minister of the Interior, Mr. Suleyman Soylu has spoken out against what Turkey perceives as “the United States [will] try[ing] to hinder Turkey from conducting an anti-terrorism operation east of the Euphrates River in Syria to eliminate the YPG/PKK terrorist group.”

Andalou, the official Press Agency for Turkey’s ruling Justice and Development Party’s regime, are now describing the President’s threats to start war “in days” as:

… “a possible mission east of the Euphrates, which Turkey’s leadership has been suggesting for months…to eradicate the presence of YPG/PKK and Daesh terrorists near Turkey’s borders.”

«‘The U.S. has thought that it could intimidate us by using the men it had nurtured. It tried to set an international encirclement but we have overcome it,’ Soylu said.”

Despite Turkey’s statements that it is protecting its citizens from international ‘terrorism’ it would appear the opposite is true.

In a recent Independent article with the grim title Kurdish villagers are dying at the hands of a war the world has ignored for too long, it was pointed out that by 2003, human rights groups had estimated that Turkey had destroyed approximately 4,000 Kurdish villages in Turkey alone. A figure putting into perspective Turkey’s now ongoing military attacks against the Kurds in south-east Turkey, northern Syria and northern Iraq.

In her article Kathleen Kern says:

“European and US allies of Turkey – because of lucrative weapons contracts and because it serves as an attractive location to base Middle East military operations – do not seem to care that the warplanes they sell to Turkey drop bombs on Kurdish civilians, nor that Turkey seems to have a long-term plan of re-establishing its Ottoman Empire.… “‘They want us to disappear,” Sumaz, our Kurdish colleague, had said that day as we discussed Turkey’s displacement of more than ninety villages closer to the border in 1995.’”

Silence. Business as usual. And more death and displacement…for the Kurds?

We can only hope this time that for once the machiavellian unwinding of international relations between the grey eminences afflicting the lives of innocent children, women and men in this region will serve to prevent more death and misery.

And after these ‘Great Powers’ get over showing each other how big their guns are…ordinary people across the world need to demand that the international community put peace – and a solution to the Kurds’ dilemma – back on the agenda.

Turkey to renew war on US-backed Kurds in Syria