The world’s 26 richest people possess the same wealth as the poorest 50%, a figure estimated to be 3.8 billion people 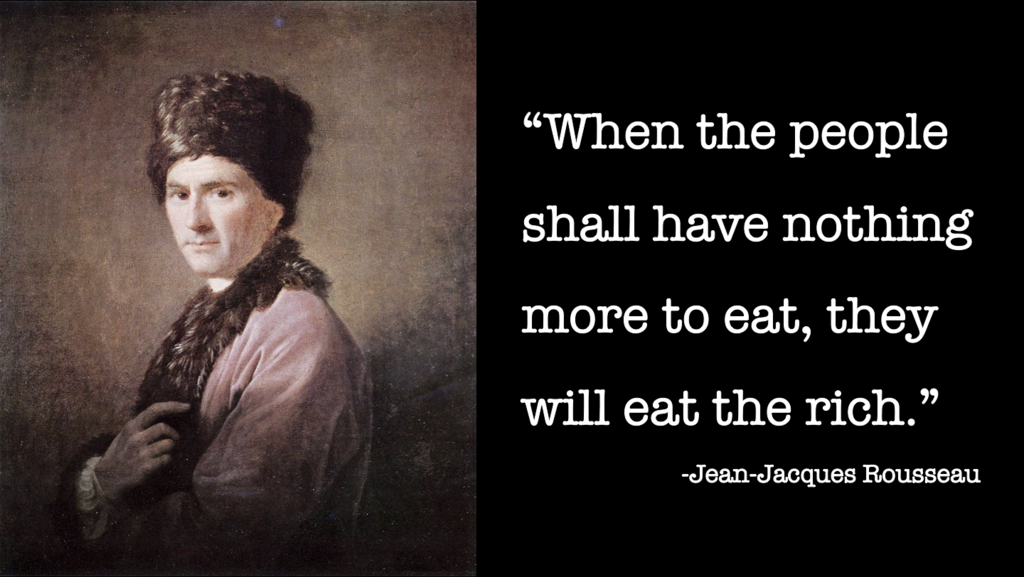 Is that not an absurd or an unkind suggestion – eat the rich? Surely it can be no more absurd or unkind than the recent outrageous figures just released in Oxfam’s 2019 Report titled ‘Public Good or Private Wealth’, with the mainstream media focusing in on the most glaring of the contradictions between those with wealth and the rest of humankind:

The world’s 26 richest people possess the same wealth as the poorest 50% (a figure estimated to be 3.8 billion people.

The report was released by Oxfam on 21 January with the discouraging statement:

”Our economy is broken, with hundreds of millions of people living in extreme poverty while huge rewards go to those at the very top.

“The number of billionaires has doubled since the financial crisis and their fortunes grow by $2.5bn a day, yet the super-rich and corporations are paying lower rates of tax than they have in decades. The human costs – children without teachers, clinics without medicines – are huge. Piecemeal private services punish poor people and privilege elites. Women suffer the most, and are left to fill the gaps in public services with many hours of unpaid care.”

Since the 1980’s and the dangerous arrival of Ronald Reagan in the U.S. and Margaret Thatcher in England, we have witnessed this now-seemingly endless ‘war’ with its demand for the privatisation of every public service and its ongoing attacks on the public dimension: “No such things as society”! (Margaret Thatcher, 23 September, 1987)

“After Margaret Thatcher and Ronald Reagan took power, the rest of the package soon followed: massive tax cuts for the rich, the crushing of trade unions, deregulation, privatisation, outsourcing and competition in public services. Through the IMF, the World Bank, the Maastricht treaty and the World Trade Organisation, neoliberal policies were imposed – often without democratic consent – on much of the world. Most remarkable was its adoption among parties that once belonged to the left: Labour and the Democrats, for example. As Stedman Jones notes, “it is hard to think of another utopia to have been as fully realised.” (George Monbiot)

Not alone this relentless attack and ruthless policy and practice of cutbacks but more importantly also, the painful lack of much needed investment in public services that Oxfam point out as being the way governments are “exacerbating” this enormous inequality and its devastating impact on so many lives.

“The way our economies are organised means wealth is increasingly and unfairly concentrated among a privileged few while millions of people are barely subsisting.

“Women are dying for lack of decent maternity care and children are being denied an education that could be their route out of poverty.”

The ugly statistics compiled in the report would break your heart:

The wealth of the world’s billionaires increased by $900bn in 2018, while 3.4 billion people still survive on less than $5.50 per day, according to the report.

Despite this, the super-rich and corporations are paying lower rates of tax than they have in decades…

Whereas: a wealth tax of as little as 0.5% on the 1% would raise an estimated $418bn (£325bn) a year – “enough to educate every child not in school and provide healthcare that would prevent 3 million deaths”.

In addition: tax dodging by corporations and the rich is costing poor countries $170 billion a year.

An estimated 10,000 people die every day because of a lack of healthcare, while 262 million of the world’s children cannot attend school.

The world’s richest man, Amazon founder Jeff Bezos, could fund the health budget of Ethiopia with just 1% of his estimated $112bn fortune.

“Universal health, education and other public services reduce the gap between rich and poor, and between women and men. Fairer taxation of the wealthiest can help pay for them.” (Oxfam Summary)

The key recommendations in the 106 page Report include the delivery of universal free healthcare, an end to “under-taxation” and more policies to support women and end gender inequality.

other social protection for all. Design all services to ensure they also deliver for women and girls.

Free up women’s time by easing the millions of unpaid hours they spend every day caring for their families and homes. Let those who do this essential work have a say in budget decisions and make freeing up women’s time a key objective of government  spending.

End the under-taxation of rich individuals and corporations.

Tax wealth and capital at fairer levels. Stop the race to the bottom on personal income and corporate taxes. Eliminate tax avoidance and evasion by corporates and the super

Agree a new set of global rules and institutions to fundamentally redesign the tax system to make it fair, with developing countries having an equal seat at the table.

Being witness to these outrageous inequalities (let alone experiencing the brutality of poverty, whether locally or globally), along with the profound damage being done in an environment where wealth is often flaunted and admired, surely it is time for everyone to sit down and put their head in their hands to ask the simple question after all these years of years of wealth generation:

… how is it that we have not found a way to both create this wealth sustainably as well as distribute it equitably..?

… and if we are not able to answer this question: can there be a future for us and our species and how?

“It doesn’t have to be this way – there is enough wealth in the world to provide everyone with a fair chance in life.

“Governments should act to ensure that taxes raised from wealth and businesses paying their fair share are used to fund free, good-quality public services that can save and transform people’s lives.” Jim Clarken, Chief Executive of Oxfam Ireland said.

Finally the report warns: “Governments face a stark choice today – a choice between a life of dignity for all their citizens or continued extreme wealth for a tiny few.”

What is disturbing also, witnessing a number of ‘regimes’ around the world,  is that when wealth is increasingly concentrated in the hands of a few, they can, and do “use it to capture disproportionate power to shape the future.”

So it will be no surprise to find out that not everyone agrees with Oxfam’s findings. One of many right-wing free-market think-tanks, the Institute of Economic Affairs (IoEA), said the findings “misrepresent poverty” and Oxfam is “obsessed with the rich”.

Responding to the Report Kate Andrews, the associate director at the Institute (IoEA) said:

“Demonising capitalism might be a fashionable activity for the affluent but it would be a travesty, especially for the poor, if calls to overthrow it were allowed to succeed.”

“Oxfam’s calculations are based on global wealth distribution data provided by the Credit Suisse Global Wealth Data book published in November 2018, which relate to the period June 2017-June 2018. The wealth of billionaires was calculated using the annual Forbes Billionaires list last published in March 2018. See the methodology for more details.

What Ireland Needs to Do to End Corporate Tax Avoidance

Neoliberalism – the ideology at the root of all our problems

“Neoliberalism’s triumph also reflects the failure of the left. When laissez-faire economics led to catastrophe in 1929, Keynes devised a comprehensive economic theory to replace it. When Keynesian demand management hit the buffers in the 70s, there was an alternative ready. But when neoliberalism fell apart in 2008 there was … nothing. This is why the zombie walks. The left and centre have produced no new general framework of economic thought for 80 years.

… What the history of both Keynesianism and neoliberalism show is that it’s not enough to oppose a broken system. A coherent alternative has to be proposed. For Labour, the Democrats and the wider left, the central task should be to develop an economic Apollo programme, a conscious attempt to design a new system, tailored to the demands of the 21st century.”