Home > Talking Kurdistan > Newroz, a story of resistance against tyranny

Newroz, a story of resistance against tyranny

To this day, on Spring Equinox, March 21st, Kurdish, Persian, Afghan and other people of the Middle East celebrate Newroz or New Day and Kawa the blacksmith 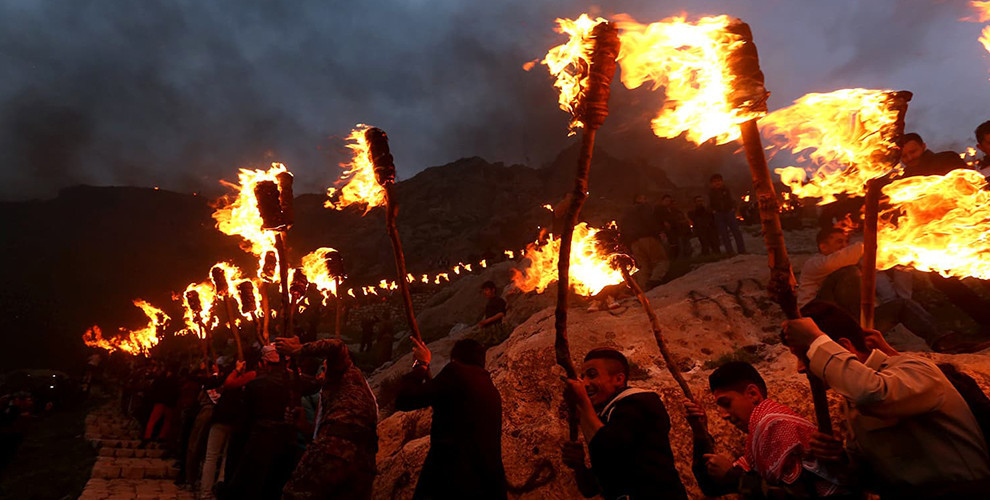 The legend has it that on 21 March day, millennia ago, a Kurdish blacksmith named Kawa led a successful rebellion against a cruel Assyrian king named Dehak, who terrorized all the people of Mesopotamia, the land between the Euphrates and Tigris.

Dehak had been possessed by Ahriman the Evil who wanted to seize control of the kingdom and did it through Dehak.

The king had been possessed by two snakes passed on to him by Ahriman who also told the king that the only way to alleviate the terrible pain he would feel, would be by feeding the snakes with the brains of young boys and girls.

From that dark day onwards two children were chosen from the towns and villages that lay below the castle.

Below the king’s castle a blacksmith who made iron shoes for the famous wild horses of Mesopotamia and pots and pans for the people of the town. His name was Kawa. He and his wife were weakened by grief and hated Dehak as he had already taken 16 of their 17 children.

One day the order came from the castle that Kawa’s last daughter was to be killed and her brain was to be brought to the castle gate the very next day. Kawa lay all night on the roof of his house, under the bright stars and rays of the shining full moon thinking how to save his last daughter from Dehak’s snakes. As a shooting star curved through the night sky he had an idea. The next morning he rode on the bare back of his horse, slowly pulling the heavy iron cart with two metal buckets rattling on the back. The cart climbed up the steep cobbled road and arrived outside the castle. He nervously emptied the contents of the metal buckets into the large wooden bucket outside the enormous castle gates. As he turned to leave he heard the gates unbolt, shudder and slowly started to creak open.

He took one last look and hurried away. The wooden bucket was then slowly lifted by two guards and taken into the castle. The brains were fed to the two hungry giant snakes that grew from Dehak’s shoulders. When Kawa got home he found his wife kneeling in front of a roaring log fire. He knelt down and gently lifted her large velvet cloak. There, under the cloak, was their daughter. Kawa swept back her long thick black hair from her face and kissed her warm cheek. Instead of sacrificing his own daughter, Kawa had sacrificed a sheep and had put the sheep’s brain into the wooden bucket. And no one had noticed. Soon all the townspeople heard of this. So when Dehak demanded from them a child sacrifice, they all did the same. Like this, many hundreds of children were saved. Then all the saved children went, under darkness, to the very furthest and highest mountains where no one would find them. Here, high up in the safety of the Zagros Mountains, the children grew in freedom.

They learnt how to survive on their own. They learnt how to ride wild horses, how to hunt, fish, sing and dance. From Kawa they learnt how to fight. One day soon they would return to their homeland and save their people from the tyrant king. Time went by and Kawa’s army was ready to begin their march on the castle. On the way they passed through villages and hamlets. The village dogs barked and the people came out of their houses to cheer them and give them bread, water, yogurt and olives As Kawa and the children drew near Dehak’s castle both men and women left their fields to join them. By the time they were approaching the castle Kawa’s army had grown to many thousands. They paused outside the castle and turned to Kawa. Kawa stood on a rock. He wore his blacksmith’s leather apron and clenched his hammer in his hand. He turned and faced the castle and raised his hammer towards the castle gates. The large crowd surged forwards and smashed down the castle gates that were shaped like winged warriors and quickly overpowered Dehak’s men.

Kawa raced straight to Dehak’s chambers, down the winding stone stairs, and with his blacksmiths hammer killed the evil snake king and cut off his head. The two serpents withered. He then climbed to the top of the mountain above the castle and lit a large bonfire to tell all the people of Mesopotamia that they were free. Soon, hundreds of fires all over the land were lit to spread the message and the flames leapt high into the night sky, lighting it up and cleansing the air of the smell of Dehak and his evil deeds. The darkness was gone. With the light of dawn, the sun came from behind the dark clouds and warmed the mountainous land once more. The flowers slowly began to open and the buds on the fig trees burst into bloom.