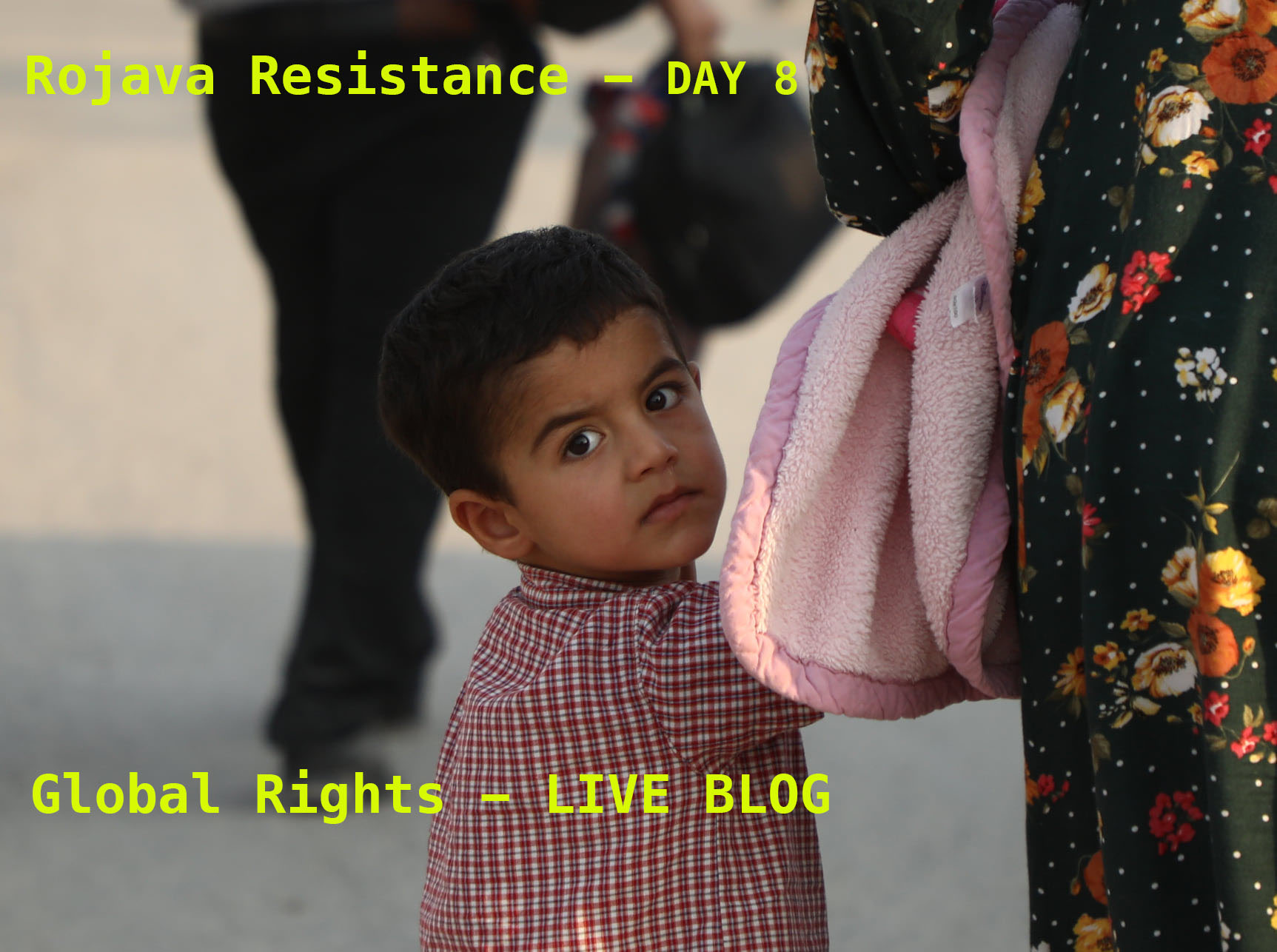 People in İpekyolu, Van, marched this evening to protest Turkey’s occupation of Northern and Eastern Syria.

Afrin Liberation Forces (HRE) hit the Turkish forces and mercenaries in Afrin, Mare and Azaz from 13 to 15 October, leaving 3 terrorists dead and 14 others wounded.

The United States House of Representatives has overwhelmingly voted its bipartisan condemnation of President Donald Trump’s withdrawal of American forces from northern Syria.

Noting that civilians were mainly injured by artillery fire that caused burns on their bodies, Hemo said; “When examining the patients with injuries today, however, we have seen that the burns were of a different type. Despite the fact that we cannot establish exactly what weapon has caused these burns, we can say that the Turkish state has used chemical weapons.”

Russian and Syrian forces have conducted joint patrol on the international road in Ayn Issa and in the vicinity of the Ayn Issa camp, then returned to the 93rd Derision close to the town centre.

Turkish troops and mercenaries have entered the Ayn Issa Camp following fierce clashes with SDF units. The mercenaries helped the ISIS members held in the camp flee before setting the camp on fire.

Syrian troops have arrived in Kobanê.

Three Turkish soldiers killed and another wounded in clashes in Dêrik’s Bazivt village.

Clashes between SDF fighters and occupation forces continue in Kobanê. SDF fighters have destroyed a DShK-mounted vehicle southeast of Kobanê.

Urban warfare began in Serêkaniyê. As violent clashes continue amid air strikes and artillery attacks, the Turkish state forces are using prohibited arms like phosphorus. SDF harshly retaliate against the attacks, inflicting heavy losses on the invaders. Reports of casualties and injuries in SDF ranks.

There are also reports of casualties among the civilians in the city, who are targeted directly by the ongoing attacks. While the occupation forces have blocked the entrance of the city anda re not allowing the wounded to be taken to hospitals, Turkish jets are targeting ambulances.

Turkish troops and mercenaries carried out an aggression against the village of al-Aref located between Kobanê’s Çelebeyi town and Ayn Issa. Reports that many civilians lost their lives in the attack.

HPG Press Office stated that 23 soldiers of the Turkish army were killed as result of actions by guerrilla forces in Heftanin and Xakurke regions in southern Kurdistan, northern Iraq.

The occupation forces also attempted to enter the village of Menacir in Serêkaniyê but suffered heavy losses during the fighting on this front. Clashes continue here as well.

Serêkaniyê city center is under constant howitzer and artillery attack.

Footage from the Battle of Honor in Serêkaniyê.

The European Representation of the Autonomous Administration said in a written statement that Kurds should unite, leaving aside all differences. The Representation urged Kurds and their friends living in Europe to take to the streets against the Turkish occupation.

Clashes are reported between the Turkish state-linked mercenaries and the Manbij Military Council in the village of Yashri.

SDF fighters destroyed two tanks belonging to the occupying Turkish state in the village of Abu Sirê to the west of Eyn Isa.

The occupying Turkish state is trying to enter the city of Serêkaniyê from three sides. The attacks are launched by the industrial side, Hawarne and the border crossing. The SDF fighters are responding to all attacks.

Many dead and wounded are reported among the invading ranks.

Coordinated through reconnaissance aircrafts, warplanes bomb the city center. There is a continuous fire. SDF fighters in Serêkaniyê have caused heavy losses to the invaders with the great resistance they are carrying out since Tuesday evening.

The well known music band Koma Berxwedan, called on “all artists to be the voice of the people in this difficult time and yet full of historic victories”. Koma Berxwedan condemned the genocide attack of the Turkish state against Kurds.

HDP co-chairs said that “detention and arrests cannot break the will of the Kurdish people.” They were referring to the repression carried out by the Turkish army against those protesting against the occupation of Northern and Eastern Syria.

International Coalition Forces have blown up their base in Xereb Işt area of Kobanê with explosives.

SDF fighters struck a convoy of the occupation forces in Wesîta village of Girê Spî, killing a terrorist and wounding five others.

The village of Celbê in Girê Spî has been liberated by the SDF after being occupied by the Turkish state Tuesday evening.

YJK-E called for the widening of the resistance for Rojava and said: “We will leave the streets until the fascist Erdogan and his mercenaries  get out of our lands.”

Kurds and their friends gathered in front of the US consulate in Yerevan, the Armenian capital, to protest the Turkish state’s invasion attacks in Northern and Eastern Syria approved by the US and Coalition forces.

About Turkish President Erdoğan, Ok said: “He is the fascist of this century, and pointed out that the attacks on Rojava were not the result of Erdoğan strength.

“Erdogan is carrying out these attacks from his death bed (…) Erdogan’s life may be not end in weeks, but it will end in months.”

Ok said that the people of Turkey gained nothing. “On the contrary he brought crisis within the society, the economy, politics. Erdoğan cannot handle all this. As such, it cannot play a role in Syria against Russia and the US. As a matter of fact Erdoğan has lost ”.

8th day of the Historic Resistance in Serêkaniyê

The invading Turkish state and its mercenaries attacked the Syrian regime positions in Eyn Isa. The regime forces responded to the attacks and lost 3 of its soldiers, while 4 were injured.

Many dead and wounded are reported within the invaders ranks. Turkish-linked mercenaries launched a new attack yesterday in their attempt to enter the village of Alya, but SDF fighters forced them to retreat after heavy clashes.

The invaders have been trying to take over the villages of Menecir, Lelan, Amri and Ehrez aiming at breaking the connection between Til Temir and Serêkaniyê.

The SDF fighters resistance has frustrated this plan.