This week marks the 6th anniversary of the August 3, 2014 massacre in Iraq’s Sinjar region of the Yazidi community by the so-called Islamic State as they swept into northern Iraq in 2014 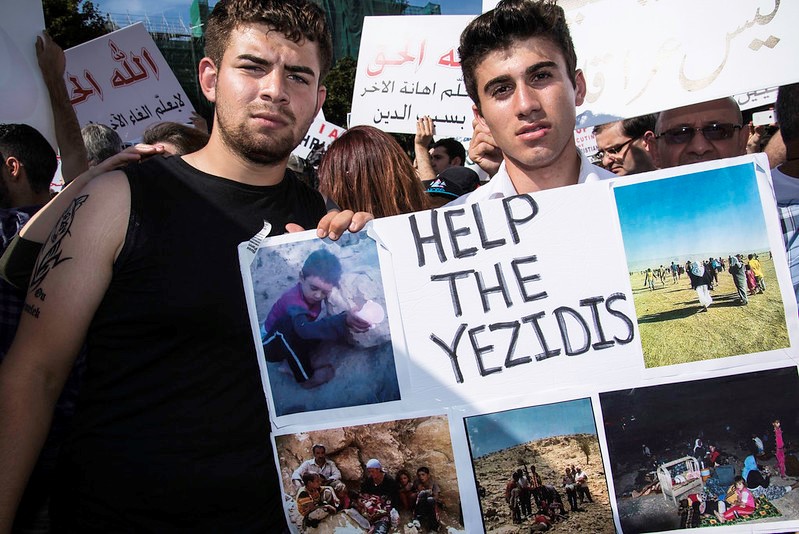 “We had hoped the world had learned its lesson from the Holocaust, but the reality is nowhere near that.” Dawood Saleh

This week marks the 6th anniversary of the August 3, 2014 massacre in Iraq’s Sinjar region of the Yazidi community by the so-called Islamic State as they swept into northern Iraq in 2014. On their brutal journey they massacred thousands of Yazidi men and enslaved an estimated 7,000 women and girls who they considered ”infidels”. Between 20,000 and 30,000 Yazidis, most of them women and children, eventually escaped from the mountain after the Kurdish People’s Protection Units (YPG) and Kurdistan Workers’ Party (PKK) intervened to stop the Islamic militants, opening “a humanitarian corridor for them, helping them cross the Tigris into Rojava” and flee their homes.

Britain’s Peace in Kurdistan Campaign, established 1n 1994 and –  “a vital and tireless campaigning organisation dedicated to advancing the rights of the Kurdish people and achieving a political resolution of the Kurdish question” –  this week posted an open letter in response to the appalling failure to see any progress for the Yazidi people since the murderous campaign of ISIS has been halted, while other mass murderers and their aggressive regimes continue the practice of ethnic cleansing, war and violence in the region with apparent impunity, not least the recent Turkish airstrikes in Sinjar which “constituted a blatant violation of Iraqi sovereignty and an outrageous attack against the people in Sinjar trying to return and rebuild after genocide.” (Free Yezidi Foundation)

Also on the eve of the anniversary, Nobel Peace Prize laureate Nadia Murad, herself a survivor of the Islamic State’s atrocities, accused government leaders and the United Nations of “failing to bring the extremists responsible for the genocide to justice.”

Murad lost her own mother and six brothers to the Islamic State killers while she herself was kidnapped and enslaved before eventually escaping.

Now, she says, the “status quo is destroying our community” and international inaction is enabling the extremist group to “accomplish their goal of eradicating the Yazidis from Iraq…”

In the statement released Nadia Murad also complained: “there is no concerted attempt to search for or rescue over 2,800 women and children who remain missing and in captivity in Iraq and Syria.”

Likewise with over 200,000 Yazidis displaced in camps without adequate medical treatment and now with an increased risk of exposure to the COVID-19 virus along with 120,000 Yazidis who have returned to Sinjar desperately in  need of “health care, electricity, shelter, clean water, sanitation, education and opportunities to make a living”, “Survivors” she said, “cannot wait another six years for the world to act.”

In a similar article this sad week in response to the massacres, Dawood Saleh, a Yazidi and author of the book “Walking Alone,” said:

“Every year, during this time, I feel ashamed to be part of this ugly world where humanity is just a word, nothing else, a world in which everything has become too political and the only interests are greed and power. The governments play with our own lives.

“My people and I will always be ashamed of the way the world left us to be victims of ISIS terrorists with no justice found. There is only a tiny ray of hope in this world that has become covered by darkness, madness and chaos.

“We still believe that hope will win and our sufferings will come to an end. We hope the world will wake up from this chaos and bring justice to all genocide survivors, including my people, the Yazidis.

“We were hoping that history would not repeat itself with such atrocities. However, for the Yazidis, it has repeated genocide 74 times. We had hoped the world had learned its lesson from the Holocaust, but the reality is nowhere near that.”

What more can be said – ? – other than to demand that August 3rd be declared as the “International Day of Action Against Femicide and Genocide”

Secretary of State for Foreign and Commonwealth Affairs

Shadow Secretary of State for Foreign and Commonwealth Affairs

The 3 August 2020 marks the sixth anniversary of the day in 2014 when ISIS attacked and massacred the Yazidi community in Sinjar, Iraq, systematically targeting women and girls who were killed, raped and enslaved in their thousands. This atrocity amounted to femicide, a femicide which continues to this day as thousands of these women remain held captive across Iraq, Syria and the Arabian Gulf after having been sold into slavery.

The United Nations has officially designated what happened in Sinjar as a genocide. For the Yezidis this was the 74th Genocide that they have endured during their history and one which was perpetrated by targeting women, which makes it constitute femicide. The Yazidi people face the bitter reality that their existence, their beliefs and their freedom can only be secured through self-determination, self-organization and self-protection. Women especially hold the vital role in this process of self-organization in response to genocide and femicide. They have thrown off their victimhood and will now determine and take control of their fate organized as the Free Yazidi Women’s Movement (TAJÊ) in Sinjar and in Europe.

The Yezidi women who were rescued from the grasp of ISIS, women who had already endured all the horrors of war and forced migration are not permitted to speak in their mother tongue and practice their faith in the countries they are taken to, which is subjecting them to layers of violence, denial of their culture and customs and immense psychological damage, amounting to a cultural genocide.

A crime against humanity was committed against the women and men who were killed or forced to migrate from Shingal and this crime demands full investigation, trial and punishment of those responsible.

In Afrin the paramilitary group Sultan Murat Brigade continues to systematically abduct, rape and murder young indigenous women. Most recently the tortured corpse of 16-year old Melek Nebîh Xelîl was found; she was abducted from the Derwish Village of Efrin. There are 70 additional women who were abducted. These atrocities attest to the fact that crimes against humanity in Syria continue.

In similar cases where crimes of genocide and crimes against humanity committed in countries such as Rwanda and Yugoslavia, ad hoc courts were established and trials held to punish the international crimes committed in these countries.

The Independent International Commission of Inquiry on the Syrian Arab Republic was established on 22 August 2011 by the Human Rights Council through resolution S-17 /1. The mandate of the Commission is to investigate all alleged violations of international human rights law since March 2011 in the Syrian Arab Republic. The Human Rights Council also tasked the Commission with establishing the facts and circumstances that may amount to such violations and of the crimes perpetrated and, where possible, to identify those responsible with a view of ensuring that perpetrators of violations, including those that may constitute crimes against humanity, are held accountable. The Human Rights Council has repeatedly extended the Commission’s mandate since then, most recently until 31 March 2021. It is beholden on the UN to ensure that the crimes against the Yezidi that occurred within Syria are fully investigated, tried and the perpetrators punished within this due process. For crimes that occurred in Iraq and elsewhere there is a fundamental need for investigation and a process of accountability to be held in the International Criminal Law system.

By 3 August 2020, 73 women’s organisations from across different continents will have declared 3 August as the international day for struggle against femicide in 2016. Peace in Kurdistan urges the UK Government to join in this call and raise your voice on behalf of the British people in support of this initiative and show support for the self-organisation of Yezidi women and for the freedom of the kidnapped, enslaved and justice for the murdered women of Sinjar.

We await your response.

FYF Statement – Six-Year Commemoration of the ISIS Genocide against Yezidis