Nasrin Sotoudeh, the Iranian human rights lawyer last year sentenced to 38 years in prison (and 158 lashes) by the Islamic Republic of Iran, has this week managed to post a statement from her prison cell 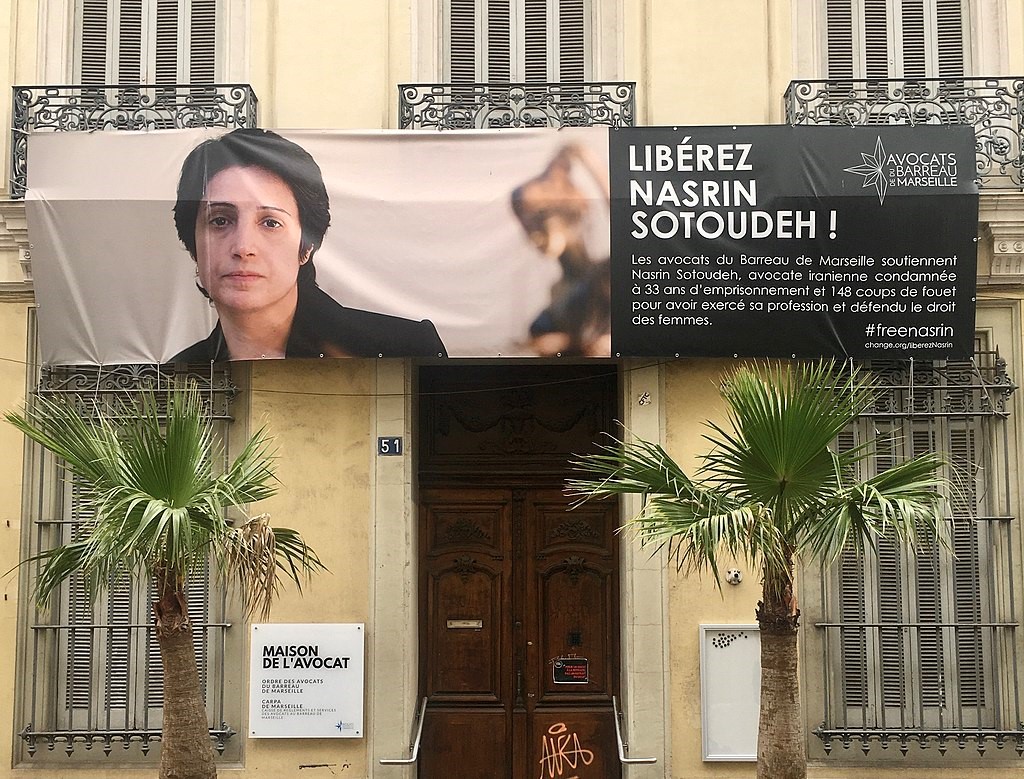 “Political [activists] have been accused of unbelievable acts: espionage, corruption on earth, undermining national security, prostitution, forming illegal channels on Telegram [the messaging app] which can keep them behind bars for up to 10 years or even lead to execution...” Nasrin Sotoudeh

Nasrin Sotoudeh, the Iranian human rights lawyer last year sentenced to 38 years in prison (and 158 lashes) by the Islamic Republic of Iran, has this week managed to post a statement from her prison cell well worth a reading in its indictment of a regime,  like all similar regimes, who not alone holds its citizens in contempt but one who believes that those who challenge their often short sighted social, economic and cultural policies have no rights, including the right to life.

Nasrin Sotoudeh’s statement follows on the start of her new hunger strike on August 11, 2020, to demand the release of political prisoners threatened by the COVID-19 virus, which is now spreading in Tehran’s notorious Evin Prison.

A previous hunger strike on March 16 lasting a number of weeks resulted in temporary releases being extended to several prisoners, including some women held in the prison. Iranian authorities however refused to release those political prisoners charged with serious offenses or those sentenced to long prison terms.

Currently, Iran has the highest number of virus-related deaths in the region with 19,804 deaths while the country reported more than 345,500 confirmed cases as of 17th August.

Like in nearby Turkey, Iran’s political prisoners were largely excluded from the country’s March 2020 mass release of prisoners, which was aimed at stemming the mounting deaths from COVID-19 in the country. “UN experts have expressed great concern for Iran’s prisoners and have called for the release of all arbitrarily detained prisoners ‘before it is too late.’” (CHRI)

“By keeping political prisoners in overcrowded and unsanitary prisons where they are denied medical care and are not separated from ill prisoners, the Iranian authorities are condemning these individuals to COVID-19 and possible death,” said Hadi Ghaemi, CHRI’s executive director.

Sotoudeh, a mother of two, was arrested in 2018 on charges of “collusion and propaganda against the system”. In March 2019, she was eventually sentenced to a total of 38 years and six months in prison and 148 lashes after being convicted “in two separate grossly unfair trials”. Some of the charges against her, including “inciting corruption and prostitution”, stem from her work as a lawyer “representing women arrested for protesting against forced veiling laws, her own opposition to forced veiling, and removing her headscarf in prison.” (Amnesty) Under the law she must now serve at least 12 years, her husband Reza Khandan has pointed out.

She is currently housed in the notorious Evin Prison, a hell-hole dedicated to the confinement, torture, rape and execution of Iranian prisoners. She lives in  the Women’s Ward which like the prison itself has been condemned internationally as totally unfit for human occupation long before the present deadly pandemic.

“The women in this ward endure inhumane conditions, including the denial of proper medical care in a prison infirmary that is dirty and lacking in supplies and medical specialists, denied or delayed transfer to hospital and specialists for treatment of serious illnesses, inadequate nutrition, and intermittent lack of heat. Like all political prisoners in Iran, these women are subjected to harsher treatment than other in-mates. They are routinely denied or subjected to limited family visits and telephone communication with family, and they are denied or subjected to limited furloughs, or temporarily leave, granted to most prison inmates in the Iranian penal system.”

Nasrin Sotoudeh’s recent hunger strike, not her first in resisting the oppressive regime, began on August 11, 2020, “to demand the release of political prisoners threatened by the COVID-19 virus, which has spread in Tehran’s Evin Prison.”

“With COVID-19 spreading through Iran’s overcrowded, unhygienic prisons, the unjust sentences of political prisoners could turn into death sentences unless these men and women are immediately released for medical care,” Hadi Ghaemi, executive director of the Center for Human Rights in Iran – (CHRI), says.

The Center for Human Rights in Iran has released a copy of the letter written by Sotoudeh from Evin Prison’s Women’s Ward. The letter was addressed to human rights activists, and explains the reasons for her action.

Her letter also reminds us forcibly of the appalling lack of human rights we continue to tolerate and allow to coexist in our increasingly inter-connected world.

“In the midst of the coronavirus crisis engulfing Iran and the world, the situation facing political prisoners has become so difficult that their continued incarceration under these tyrannical conditions has become impossible.

“Political [activists] have been accused of unbelievable acts: espionage, corruption on earth, undermining national security, prostitution, forming illegal channels on Telegram [the messaging app] which can keep them behind bars for up to 10 years or even lead to execution.

“From the very start of the judicial process all the way through to sentencing, many suspects are denied independent legal representation or prevented from unrestrained consultation with their lawyers.

“Revolutionary Court judges have repeatedly and unabashedly told political prisoners that verdicts are issued only on the basis of reports prepared by intelligence and security agencies and interrogators spell out in advance the sentences awaiting suspects.

“Lawyers who challenge Revolutionary Court judges are sent to prison. Political suspects, charged with serious, unimaginable acts, are given maximum punishments – in some cases more severe than in the law – and then they wait, hoping for a legal solution under these unjust conditions.

“[The law] promises defendants an appellate process during which they are conditionally released, punishment is suspended and verdicts are not enforced until the Appeals Court makes a ruling, while punishments are supposed to be kept to a minimum in accordance to a new law. Instead the authorities resort to unlawful methods and bow to the opinions of interrogators, thus blocking the last [legal] avenues on political prisoners.

“Many prisoners are currently eligible for conditional release and many of them will be freed with the enforcement of a new law. [CHRI note: In February 2020, due to the coronavirus threat, those who had been sentenced up to five years in prison and served a third of their term were pardoned.] However, prisoners are being treated as if there is no such law or legal recourse, while the authorities refuse to respond to any communications requesting legal steps [for prisoners’ release].

“Given the lack of any response to communications and requests for the freedom of political prisons, I am starting a hunger strike.

“With the hope that one day justice may prevail in my homeland; the land of Iran.

Now on hunger strike and with her health in increased danger because of the presence of the coronavirus in the prison, Nasrin Sotoudeh continues to be held behind bars at Evin Prison, separated from her children and family, forcibly imprisoned in an internationally recognised hell-hole possibly for the next 38 years and all for what – ?

– if not for these unbelievable acts: espionage, corruption on earth, undermining national security, prostitution, forming illegal channels on Telegram –

…then certainly for “her peaceful work as a human rights attorney” along with her courage in challenging a corrupt and blind regime whose use-by date must soon arrive?

To continue her incarceration on these ‘fabulous’ charges such as “encouraging prostitution” (“for advocating against compulsory hijab and defending citizens’ right to peaceful dissent”) can only represent an outrageous indictment on this regime to everyone with a hope for  peace in the region as well as the promise of a future for humanity.

The news on the 18th August that the regime has now arrested (for “insult and assault”) her 20 year old daughter, Mehraveh Khandan, in an effort to pressurise Nasrin Sotoudeh, can only serve to expose this regime’s escalating inhumanity and contempt for its own citizens.

This can only continue as long as it believes it can act with impunity and in total  disregard both for its own citizens who have braved its wrath by standing up and protesting along with the international community who watches. And waits…

Nasrin Sotoudeh exists as a challenge to this short-sightedness, systematic cruelty and inhumanity…

She should not be forgotten.

“In prison you tell yourself,  ‘if my hands are tied and my heart aches, It is because I want to build  a better world for all children, including my own.’” Nasrin Sotoudeh

In Her Own Words: Nasrin Sotoudeh talks about juvenile executions in Iran

Watch an exclusive video of Nasrin Sotoudeh in her Tehran office talking about juvenile executions in Iran. (2011)

A bold speech by Nasrin Sotoudeh

“40 Million” a short documentary from director Jeff Kaufman for TIME

“The Iranian government see women as the first line of opposition and accuses them of acting against national security.”

“There are many feminists, including young women who are not mentioned anywhere because they are not famous, who have been in prison for many years. This is the price we pay for freedom and justice.”