Séamas Carraher is a working class poet and writer born on the Southside of Dublin, Ireland 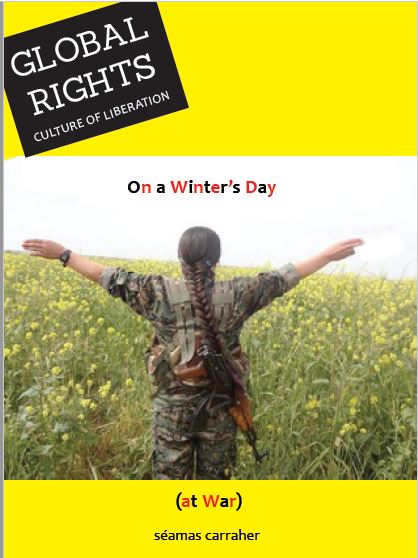 Séamas Carraher is a working class poet and writer born on the Southside of Dublin, Ireland.

He has worked many jobs to pay the rent as well as being a human rights activist for over 30 years in the struggle against poverty and injustice.

Currently he splits his time between supporting long term homeless street drinkers and writing (in various formats) on the many silences our world hides itself within, including the “personal” and the “political” that shape all our search for “freedom”.

He is regularly writing for Global Rights (www.globalrights.info), where many of his articles and poems can be found, as well as on twitter, @wretchedearth2 and on his own blog http://seamascarraher.blogspot.com/.

Carraher has been writing extensively about Rojava and Kurdistan in the past three years and he has dedicated more than one poetic work to Kurds.

Prior to this long poem of anger and despair at the invasion of Afrin, a safe refuge for many from the brutality of the Syrian Civil War Carraher wrote other poems at times where, he says «I felt particularly helpless at what was going on in Northern Kurdistan – south east Turkey».

The poems can be found on the Global Rights webpage:

For The Kurdish People in Diyakabir and Beyond / 29 Feb 2016

By the Banks of the Tigris River My Soul Sat Down and Wept, for the people of Cizîr, 03 Apr 2016